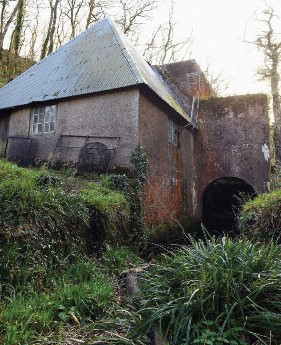 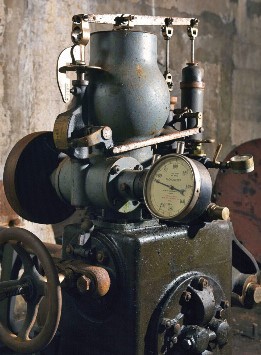 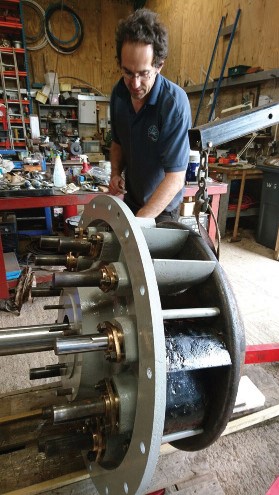 The story of hydroelectric power at Castle Drogo, Devon, designed by Edwin Lutyens, began in 1916 when John Coates Walker, the Clerk of Works for the construction of the castle, wrote the following to the firm, Gilbert Gilkes and Co Ltd, a well-established engineering company specialising in generating hydroelectricity.

“Some years ago you put in for Julius C Drewe Esqre of Wadhurst Hall,
Sussex a Turbine plant for running Electrical plant. Mr Drewe is now building
near Drewsteignton a Castle close by the River Teign and would like you to
send if possible the same Representative that visited Wadhurst Hall to report on
the feasibility of a Turbine plant being installed there for the same purpose…”

Gilkes’s representative, Norman Wilson, visited the site in March, 1916 and prepared a scheme which was sent to Walker in late April. The original intention was to purchase the mill at Sandy Park Bridge (now Mill End Hotel). However, the negotiations with the owner foundered and the decision was taken not to buy it. The matter of the turbine house and electricity production features heavily in the correspondence about the wider construction of the castle and in particular the voltage of its power supply: Drewe took an inordinate amount of time to decide between 110 and 220 volts. Finally, in September, 1916 he fixed on 220 volts. However, all discussion concerning the production of power ceased until after the First World War.

In early 1927, the idea of hydroelectric turbines was resurrected and Wilson visited Drogo once more to advise Basil Drewe, Julius’s son and an eminent patent lawyer, KC and engineering expert, on the best course of action. The general, but not precise, site for the turbines seems to have been settled upon during this visit on 12 January. There was some debate over the best site — one was chosen by Wilson, the other by Basil Drewe. In the end, it was decided that “the longer run of pipes to the site Captain Basil selected is preferable, the pipes being less in diameter, giving more water in the river”.

The matter of the material for the pipes was discussed at length in the correspondence, with Walker stating he would “much rather fix steel pipes”. Conversely, Julius Drewe advocated using “concrete” pipes and to “pay the extra capital outlay”, arguing that these had double the life expectancy of steel. In October, 1927, Walker accepted Gilkes’s estimate and specification “for all work…the sum being £1,140.0.0”. He also stated that all steel or iron sluices were to be used and that the weir would be at the site chosen by Drewe and would be 3ft 6in high.

Work began on the scheme in 1928 after a delay as Walker had to have it approved by the river conservators. By early February, 1929 the roof was on the turbine house, the turbines on site and the cable run to the building. Therefore, Walker was able to request that Gilkes and the electricians start work on the installation. This must have gone reasonably smoothly as, by March, initial running and testing of the turbines got underway.

The two turbines installed at the castle are Francis-type reaction turbines, in which all water passages are completely filled and the energy stored in the water at the inlet of the turbines is transferred to the runner or rotor as it passes through the machine. This type of machine was first developed in the United States by James Francis who, shortly after 1850, developed an inward-flow reaction turbine with moveable guide vanes that controlled the water entry on to the curved blades of a runner. The runner’s complex shape made the turbine difficult to fabricate, so they were a relatively expensive option. While both turbines are of the same basic design, their sizes and output are  different to allow for the seasonal variation in the flow of the River Teign.

Despite the castle being connected to the National Grid at some point between 1968 and 1972, the turbines continued to supply some power to the castle and garages until 1994. They were switched off as the informal abstraction requirements were not regularised and therefore the Environment Agency no longer permitted them to operate.

But the reinstatement of the hydroelectric turbine was considered, originally as far back as 1999, although it wasn’t developed as a standalone project until 2010. This work led to a new abstraction licence being obtained. Following this, designs developed with planning permission and listed-building consent were obtained in 2012.

With the establishment of the National Trust’s Renewable Energy Investment programme, reinstating the historic hydroelectricity scheme became viable. Modelling carried out in May, 2016 looked in detail at profile-matching the hydrogeneration with the demands at the castle’s visitor centre. This demonstrated that the reinstated turbines could provide approximately 59 per cent of its electricity requirements.

The project was designed to deliver an integrated renewable energy scheme that would enable the property to derive the majority of its heat and power from renewable sources. This was achievable by designing an integrated scheme to replace the existing inefficient biomass heating system and reestablish the hydropower plant. Connecting the hydro to the biomass plant under a hybrid scheme utilises the excess electricity, which would normally be exported to the National Grid, by providing an additional thermal store heated by hydroelectricity. This integration allows all heat and power generated on site to be fully used.

Perhaps the most remarkable opportunity this project presented was to be able to generate electricity using the original wall-plate Francis turbines, installed by Gilkes in 1929. Most of the original scheme’s infrastructure was found to be sound and reusable in the current scheme. It seemed that Julius Drewe’s decision to use concrete pipes over steel was sensible and far-sighted.

The main contractor, Derwent Hydroelectric Power Ltd, has an extensive track record of installing small-scale hydropower schemes and applied their expertise and problem-solving skills to the project with great dedication. Its implementation required working within the Registered Park and Garden as well as inserting modern machinery into a Grade II-listed structure (which included the associated engineering of the intake and weir). A major challenge was the restoration of the original turbines to full working order by On Stream Energy, a turbine engineer based at Ponsworthy on Dartmoor.

The project also required the installation of new elements, including a state-of-the-art intake screening system, fully compliant with stringent Environment Agency regulations, which will ensure fish and eels cannot enter the turbine system. A new cable has also been installed to bring the power directly to the visitor centre. This necessitated groundworks on the precipitous slopes of the Teign Gorge, fearlessly carried out by Gwyn Roberts Construction, based in North Wales.

Hydroelectricity generation began in September, 2017 with both turbines working in conjunction. These only start generating electricity once there is sufficient water flow in the river, meaning that generation will slow down in the summer and increase through the autumn and winter, while ensuring the river retains sufficient natural flow.

This project has been both challenging and exciting. The combination of the conservation of a key heritage asset alongside financially sustainable renewable energy generation is truly innovative.