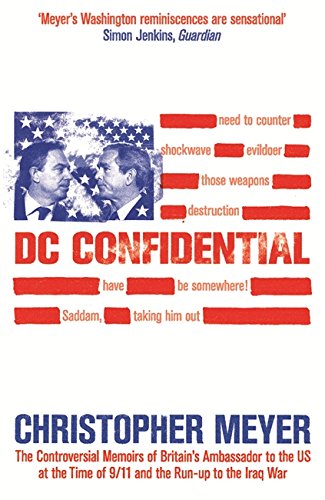 Memoirs of British Ambassadors to the US are always more interesting if they include references to Lutyens and the joys or otherwise of living and working in the British Embassy at 3100 Massachusetts Avenue NW, Washington DC. Sadly, most memoirs are confined to political recollections, but those of Christopher Meyer, our man in the hot seat from 1997 to 2003 – who was lucky enough to have been deputy to two earlier ambassadors in Washington from May 1989 to the end of 1993 – include a whole chapter on “The Great House.”

Famously vilified by John Prescott as being a “red-socked fop” (for having described the Deputy Prime Minister as “a mastiff with his hackles up”), Meyer also wrote: “I really liked Prescott… I thought he had a sharp political brain and that it would be folly to under-estimate him; but, somehow or other, we got off on the wrong foot from the beginning.”

Meyer also liked Lutyens. “The residence is a magnificent structure, which, unlike its miserable companion [the 1950s brutalist embassy offices] has seen its reputation grow with the passing of the years. Lutyens, in his mischievous, original way, gave the building different architectural styles for its three main aspects.”

The greatest drawback was the lack of privacy for the ambassador and his glamorous wife Catherine, whom he had married only the day before they left for Washington in 1997, for their private apartment was located on the same corridor as the bedrooms for a dozen house guests.

“On arriving, as newly weds, we found to our embarrassment that our apartment had three doors opening on to the corridor and that none of them could be locked. Some of the domestic staff had got into the habit of walking in without knocking.” As a temporary measure, they blocked two of the doors with cupboards, but it was not until after the events of September 11, 2001, that security throughout the embassy was improved.

Of more interest to members of the Trust, however, was the poor state of repair and décor when the Meyers first arrived. “It had the faded elegance of a Brighton hotel. Major renovation had last been done twenty years previously. Lutyens’s bold, clean lines had disappeared in a jungle of Laura Ashley fabrics. Carpets had been nailed into the marble surrounds of the library floor. Foreign Office issue reproduction furniture spread like fungi through the public rooms. Some of the bathrooms and most of the plumbing remained untouched since 1930, when the Great House was completed.”

The electrical wiring was unsafe, the plumbing was beginning to leak, damaging the plasterwork, and the whole building needed redecorating. Meyer gallantly gives all the credit to his wife, who “through sheer perseverance and good luck…was able to renovate and redecorate the entire guest floor, including the ambassador’s apartment, and, downstairs, the library, dining room and drawing room. The ballroom had to await our successors. This labour of love and hard slog took almost our entire five and a half years.”

He does not mention the interior designers who helped Catherine Meyer, nor does he describe the redecorations. For this one must turn to the tour notes prepared by Paul Waite for the Lutyens Trust’s trip to Washington on October 15-19, 2001 – only a month after 9/11. Lady Meyer (Christopher having been knighted in 2001) chose the Washington-based firm of Brown-Davis Interiors, who removed 50 coats of cracked and chipped paint from the panelled walls and stripped them down to the bare wood before repainting them in yellow and beige. Lady Manning, wife of Sir Christopher’s successor, Sir David Manning, has had the ballroom repainted. More recently, Monarc Construction Inc. has renovated the appalling six-storey embassy office building, replumbed and renewed the bathrooms in the ambassador’s private apartment – and also installed a kitchenette. What would the great man have thought of that?