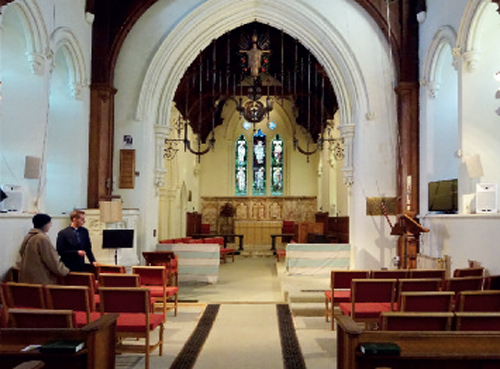 The Argument for Reinstating the Screen Walls at Busbridge Church, Godalming

A report by Anthony Richardson

Busbridge Church, which was originally called St John the Baptist Church and was sited in countryside among a scattering of cottages at the junction of the Brighton and Hambledon roads, now stands on the edge of Godalming’s suburban sprawl. Today, the church has a flourishing congregation and for some years has been too small to seat them all.

It was commissioned by the Ramsden family of Busbridge Hall, near Godalming and consecrated on 8 March, 1867. There is some debate as to who designed the church. Nikolaus Pevsner believed that George Gilbert Scott Jnr did; others believe that it was created by his father George Gilbert Scott. For its first 30 years, its interior had a plain nave of Bargate stone and rendered walls, with undecorated windows and a low step up into the chancel. In 1894, a reredos of carved chalk figures, designed by architect John Oldrid Scott, was added. Then, in the late 1890s, the church was fitted with east and west windows by Morris and Co and a chancel screen by Edwin Lutyens. Soon after came a communion rail in green marble, a frontal by William Morris on the altar and oak choir stalls. By 1905, the church had been decorated with outstanding works of the period.

Since the 1960s, there has been a progressive change in the ritual needs of the congregation which has led towards a light, white-painted, softly furnished “drawing room” uninterrupted by pews and steps. In 2015, as part of this process, the chancel’s marble screen walls were dismantled. This area has thus lost what has been described as “The richness of the streaked green Cipollino marble with the natural swirls arranged to create symmetrical panels in keeping with the Arts and Crafts interest in materials of Byzantine architecture”. In 1994, these words were used as an argument for retaining the marble green walls, and persuaded the Diocesan Chancellor to refuse consent for their removal.

Nobody denies that the church has an important interior with Arts and Crafts works of more than local interest. However, its congregation has exercised its right to worship as it wishes and to change the interior accordingly.

But now that the space is all-white, the carpets laid, the walls removed and the band can perform on its raised platform on one side of the chancel, there has been discussion about how the original interior’s aesthetic value can be restored. The congregation has said it will reinstate the screen walls at some point once it has built a new church more suited to its needs and numbers. The issue as to whether or not the Lutyens walls should be reinstated forthwith or allowed to remain dismantled in storage is now before the Chancellor of the Diocese of Guildford. The Lutyens Trust, the Victorian Society and Waverley Borough Council argue that they should be reinstated now. Let us hope that the Chancellor agrees.

A Tribute to Edwin Lutyens, whose 147th Birthday is on 29 March