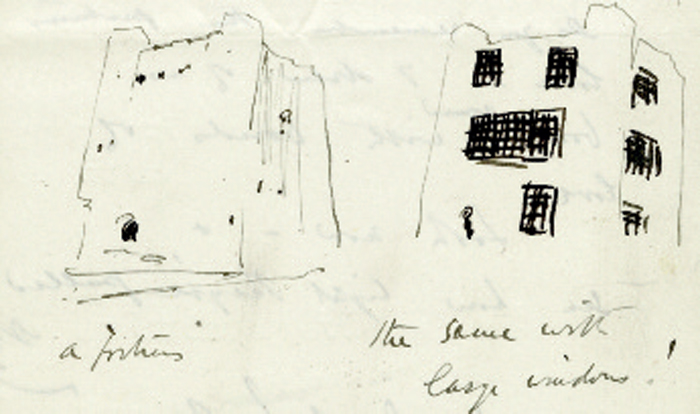 A Tribute to Edwin Lutyens, whose 147th Birthday is on 29 March

Poem by Giles Weaver, owner of Greywalls, Gullane, which has been in his family since 1924

Lutyens was funny,
His outlook was sunny,
He designed and he built for the rich.
He teamed up with Jeykll,
Not his mother, his equal!
Arts and Crafty, of course, but not kitsch.
A mad workaholic,
But not Theosophic,
Built cemeteries, houses and banks.
Commissions he chases
Through friends in high places,
Rewards them by playing them pranks!
Aesthetics incredible,
Practicality fallible,
For an Empire, he built, on the wane.
Now, one four seven
He designs still in heaven,
So sluice to our hero, champagne!

This Lutyens illustration, featured in Christopher Hussey’s biography of Lutyens, is of Greywalls, built for The Hon Alfred Lyttleton from 1900 to 1901. It was drawn in response to Mrs Lyttleton’s objection to the small windows he had given it to contrast with its otherwise massive, fortresslike design. Lutyens had said: “Mrs Lyttleton, you can’t have a fortress and large windows, too.”