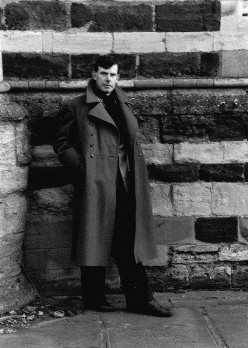 The architectural conservation world has lost one of its doughtiest defenders with the passing of Gavin Stamp, who died last December. Educated at Dulwich College and Gonville and Caius College, Cambridge University, he read history. This included architectural history, which he studied under David Watkin, and he later emerged as a Young Fogey with strong views on the shortcomings of Modernism. Gavin’s PhD thesis had been on George Gilbert Scott Jr (1839-1897) and, on moving to London, he catalogued the huge trove of drawings by Scott Jr and his sons, also architects, that are in the RIBA Drawings Collection.

His volume of the catalogue devoted to the various Scotts, finally published in 1980, is an early example of his immense scholarship, also reflected in more than 500 references to him that appear in the RIBA Library catalogue. He worked at first for the Architectural Press in Westminster, where he became a friend of John Betjeman, in due course succeeding him as the main writer of the column ‘Nooks and Corners’ in Private Eye in which he lambasted fraud and vandalism in the architecture world.

In the 1970s, he curated a number of remarkable exhibitions in the RIBA Heinz Gallery, including on Richard Norman Shaw in 1976, First World War cemeteries, called Silent Cities: Memorial and Cemetery Architecture of the Great War (1977) and London 1900 (1978), and throughout his life was a prolific author of books and articles. The depth of his knowledge of Edwin Lutyens’s work was demonstrated in his books The Memorial to the Missing of the Somme, Edwin Lutyens: Country Houses: From the Archives of Country Life and in Lutyens Abroad: The Work of Sir Edwin Lutyens
Outside the British Isles, which he co-edited — all major contributions to Lutyens literature. His more general works had a bent towards highlighting the damage done to British cities and communities by those authorities who ought to have been supporting rather than destroying them.

A master of invective, Gavin never minced his words when drawing attention to the self-interest and deficiencies of planners, developers, central and local government and indeed architects. He was no stranger to writs for libel. Stephen Gardiner sued him successfully for his critical comments on his sub-Miesian replacement for George Dance the Younger’s neoclassical masterpiece Stratton Park, Hampshire. This was sheer hypocrisy for Gardiner himself had been in trouble with the Press Council for his attack on Manchester City Council in 1973 and had countered: “Frank, honest criticism is essential. It is not only buildings that must be criticised by people but their values”. Gavin was never hypocritical but sometimes even those who supported him wished that his criticism could be a little less frank. In my own encounters with him, I found him both intimidating and charming which, combined with his knowledge and rigorous scholarship, explains his extraordinary impact on the world of architectural conservation. At his funeral at St Giles’ Church, Camberwell, designed by Sir George Gilbert Scott, father of George Gilbert Scott Jr — not a small church — there was standing room only, further evidence of the respect in which he was held.

Gavin and The Lutyens Trust by Janet Allen

Gavin was also a key member of the organising committee that curated the monograph exhibition, Lutyens: The Work of the English Architect Sir Edwin Lutyens (1869-1944), mounted by the Arts Council at London’s Hayward Gallery in 1981. Gavin was responsible for selecting the exhibits for the sections devoted to the creation of New Delhi and the war memorials. His contribution to the catalogue was exemplary and that publication remains one of the most authoritative on Lutyens’s work.

An immensely popular exhibition, it caught the imagination of the wider public, which was increasingly receptive to more historic architectural styles after a postwar period dominated by Modernism.

When the integrity of The Salutation in Kent was threatened by redevelopment in the early 1980s, Gavin and other Lutyens scholars met the challenge, founding The Lutyens Trust to fight to preserve the architect’s heritage.

And by Margaret Richardson

Gavin was a brilliant writer. While he tackled the subject of Lutyens’s country houses in his book, Edwin Lutyens: Country Houses, with its images from the archive of Country Life magazine, his very best work was his small book The Memorial to the Missing of the Somme. AN Wilson wrote of it: “It is a truly classical piece of prose, a tragic chorus on the Somme which reverberates on the battlefields of today”.

New Book – Lest We Forget – By David Hearn