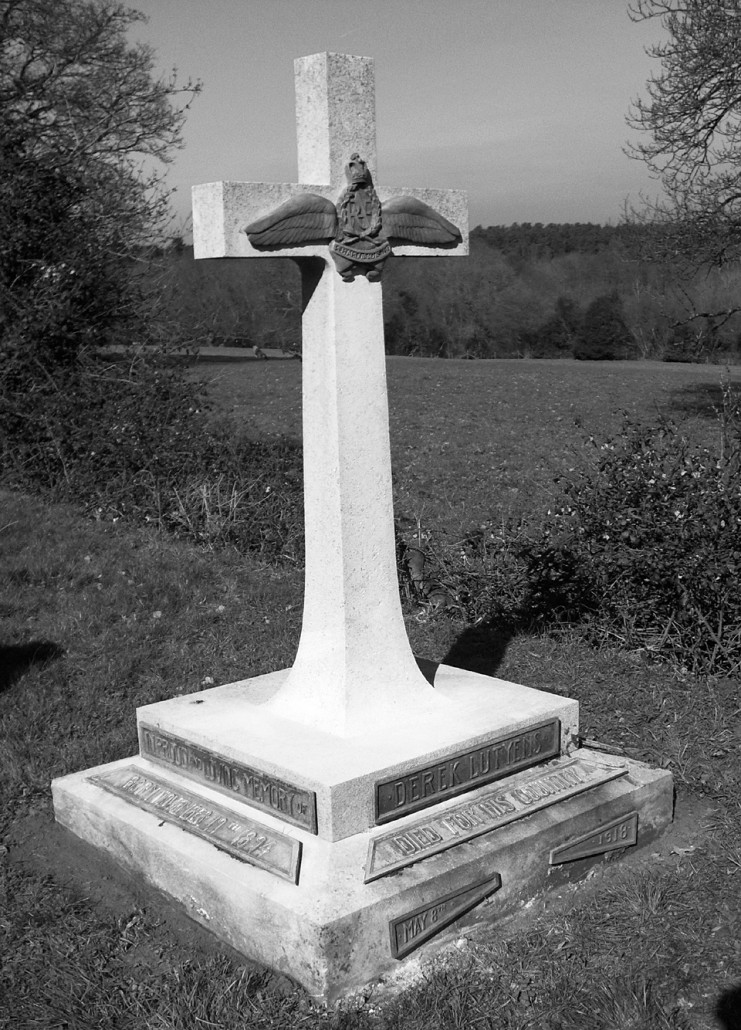 In the churchyard of Thursley in Surrey there is a monument marking the grave of my uncle and namesake, Lieutenant Derek Lutyens of the Royal Air Force, killed at the age of 23 on 8th May 1918. About 15 years ago the bronze RAF eagle that was its principal adornment, and not apparently firmly enough fixed to the stone, was stolen. This year it has been replaced and, it is to be hoped, the memorial restored to something like its former glory. As I only recently learnt, the design of the gravestone was almost certainly the work of my uncle’s uncle Edwin Lutyens.

Derek Lutyens had transferred from the Royal Fusiliers to the Royal Flying Corps in mid-1916. He was not killed in combat but when serving at Farnborough with the Experimental Squadron of the RAF, as the RFC had become a few weeks before. This posting suggests that he was a talented pilot. The aircraft in which he died was apparently being flown for the purpose of pressure tests on its tail plane, and it was the failure of the tail plane that caused the crash. The civilian observer flying with my uncle was also killed. His body, at the time at least, was reported as not having been found.

In the circumstances Derek was to have a memorial that is rather more elaborate than those of almost all the thousands upon thousands of his contemporaries who died in 1914-1918. Edwin Lutyens certainly rose to the opportunity, almost as if he realised it was a first rehearsal for the many memorial monuments he was subsequently to design.

Restoration of the vandalised monument seemed a daunting task. I knew of no photograph of the stone in its original state, and had only my imperfect memory to rely on, while it seemed obvious that any authentic replica of the eagle would soon be stolen as well. Ultimately, however, through the Lutyens Trust, I learned that James Brazier, a member of the Trust, and Russell Morris, the Historic Buildings Officer for the Thursley area, not only had a photograph of the grave in its former state, but had been considering ways in which it might be restored.

Respect for the monument’s setting as much as the attribution to Edwin Lutyens strongly argued for having a replica that was as close to the original as possible. In particular it should be of bronze. The problem of further theft came to seem more apparent than real when it became clear that all the bronze fittings on the stone, and not only the eagle emblem, had been poorly secured. Both the new eagle and its attendant inscription plates are now securely bolted to the stonework they once again satisfactorily adorn.