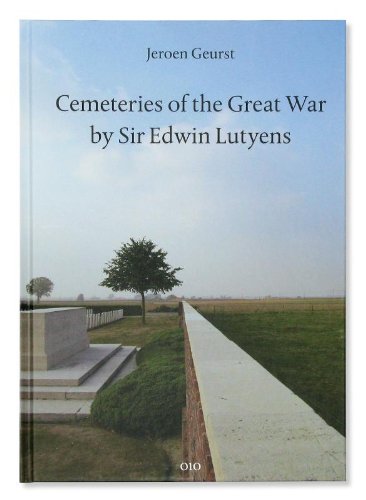 Cemeteries of the Great War by Sir Edwin Lutyens

A new book about Lutyens’ WWI cemeteries has been launched.

The Azure Mist of Ypres, as the mist and sunny blue spells on Flanders fields are known, still covered the old battlefields as we approached the city on Saturday 9th October. About 60 Dutchmen, except me, mainly architects, joined a ‘lightning tour’ organised to launch the new book. In Ypres Town Hall the book was presented to the Commonwealth War Graves Commission by the author, Jeroen Geurst, who is a practising Dutch architect, based in The Hague. His book is the culmination of many years of visits and study.

Geurst analyses the development of the design of the British WWI Cemeteries, especially the search for a uniform architectural language for this project, and Sir Edwin’s role in that process. The book presents many new findings, the Gertrude Jekyll Collection of the University of California Berkley proved to be a rich source. The book, lavishly illustrated with photographs and drawings, is intended to be a study and a travel guide to the cemeteries. It contains a description of all 140 cemeteries that can be attributed to Lutyens.

One of Geurst’s central themes is the importance of the concept of the “green cathedral”. In preliminary designs for the IWGC, Lutyens proposed a layout for Trouville War Hospital Cemetery based on the plan of a medieval cathedral in which the pillars are replaced by trees and the war stone is in the position of the high altar. Geurst shows how that preliminary idea evolved to what we see today and he explains how Lutyens came to imagine the cemeteries as chapels of one great cathedral spanning the globe.

The book shows by analysing the shelters in an architectural way how these designs are related to the ancient tetrapylon and are therefore related to each other; from the half tetrapylons at the entrance of the Kemmel Chateau Military Cemetery to the multiple tetrapylon structure of the Thiepval monument.

The book gives much consideration to the elements which the different IWGC architects could employ to vary their designs: the placing of the cross of sacrifice and the war stone, the planting, the stairs and entrances, the landscape. Geurst clearly is interested in the meaning of the cemeteries for modern architecture especially how, with limited means of variation, such an enormous variety can be created and still preserve unity.

By writing his book Geurst makes it possible for a wider public to understand what Lutyens and the other architects tried to express and how they attempted to relate the human scale to the enormity of the events that necessitated these almost one thousand cemeteries.

Our Dutch party were very lucky to hear it explained by the author himself during the visit to seven of the cemeteries around Ypres. The Azure Mist had become a bright day.

English Heritage is to be congratulated on inviting Mervyn Miller to contribute to their series of publications in the Informed Conservation Series. Mervyn Miller is a distinguished authority on town planning and known to members as a Trustee and author of studies on Raymond Unwin (1992) Letchworth (2002) and Hampstead Garden Suburb (2006). Here he has written a splendid account of the garden city movement for the informed enthusiast for architecture in a punchy, direct manner which is well illustrated with new and contemporary photographs.

By the late 20th century there was such total acceptance of Ebenezer Howard’s ideas that it is difficult to realise how radical they were. Mervyn Miller skilfully takes the reader through the philosophical, political and social threads of the late 19th century to tell the tale of the emergence of Howard’s idea of garden cities which would be the solution to the ills of urban housing. He sets the story in the context of the building of Titus Salt providing housing for his workers at Saltaire (1853-63) and Colonel Edward Akroyd’s early engagement with aesthetics with involvement of the architect George Gilbert Scott in Akroydon (1861-73). The high priest of Victorian morality, Ruskin, desired that houses should be built ‘in groups of limited extent….. walled around…..clean and busy streets within and open countryside without’. These ideas were taken up by Arts & Crafts architects whose work particularly interests the Lutyens Trust. The ‘garden cities’ are where much innovative domestic housing and fine public building can be found.

Letchworth, Welwyn Garden City and Hampstead Garden Suburb are discussed in some detail as they represent the most comprehensive realisation of Howard’s ideas. We are so used to state intervention that it is salutary to learn that these townships were established with the philanthropic energy of private individuals such as Henrietta Barnett through the mechanism of limited liability companies. They set standards of building and design which became the norms of the municipal authorities and government and were the British contribution to urban planning. Perhaps this is where David Cameron found his idea of the Big Society!

The themes of housing, employment and spiritual life are covered. Lutyens was involved early on at Port Sunlight, designing cottages on Corniche Road in 1897. This small beginning led on via Hampstead Garden Suburb to New Delhi. Baillie Scott, Voysey, Oswald Milne and others are among the architects who developed the smaller middle class homes which are so prized these days. Branded manufacturers with household names set up and provided employment, like Spirella Corsets in Letchworth and Shredded Wheat in Welwyn. These towns were also libertarian; different religions, political opinions, pacifism, vegetarianism, temperance and many other ‘isms’ could be pursued in these ideal environments.

Mervyn Miller has included a Gazetteer of garden city communities in England which is invaluable to those planning architectural tours and there is a very useful bibliography for further reading. This is a very good read. In this concise publication Mervyn Miller and English Heritage have made a very useful contribution to the literature on English garden cities.