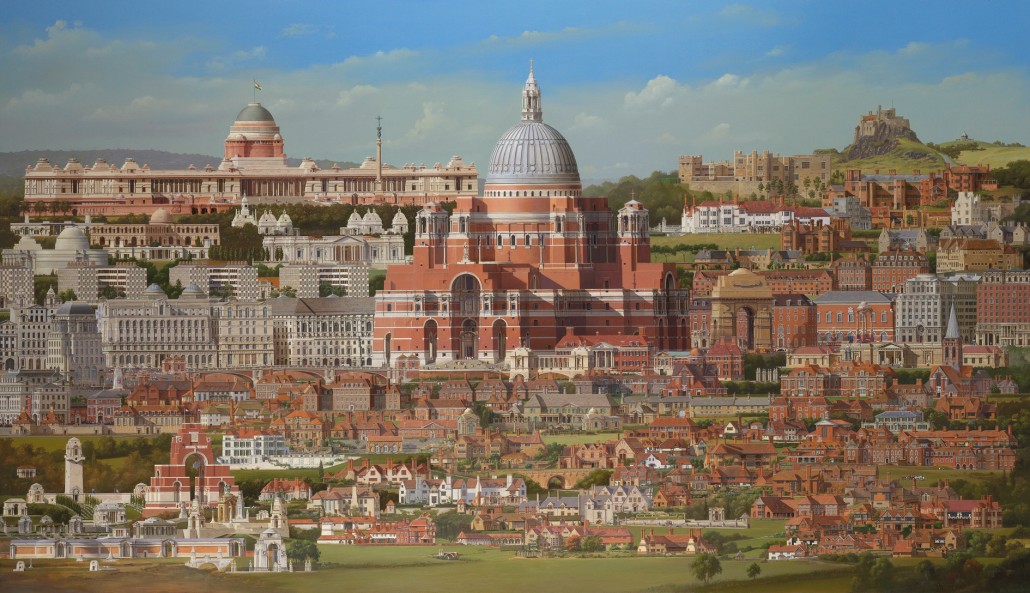 By Carl Laubin, the artist

After depicting the work of Palladio, Bramante, Wren, Vanbrugh and Hawksmoor, the architect-turned-painter Carl Laubin has recently executed this capriccio on a  grand scale (150 x 260 cm), which gathers on one canvas 147 of Edwin Lutyens’s works. Called Metiendo Vivendum (By Measure We Live), A Tribute to Sir Edwin Lutyens RA, 1:200, Laubin’s oil painting is reminiscent of the perspectives of CR Cockerell — in particular his 1838 watercolour, A Tribute to Sir Christopher Wren (who greatly influenced Lutyens) — and JM Gandy (1771-1843).

Laubin’s capriccio has, as its dominating centrepiece, a depiction of Liverpool Cathedral as it would have appeared had it been built. All the buildings are shown on a 1:200 scale and demonstrate the astonishing extent and variety of Lutyens’s output. The painting is not devoid of people, and there are some humorous touches. To include Queen Mary’s Dolls’ house, Laubin has shown it being wheeled in to an exhibition at the Hugh Lane gallery in Dublin.

“This celebration of Lutyens’s architecture on the 70th anniversary of his death was conceived three years ago when, on a trip to Cornwall, I stopped at Castle Drogo  and was totally captivated by it,” says Laubin. “since then, I’ve visited as many of his built works as possible and drawn them up individually to work into a composition. I’ve discovered in the process that I’ve been living among a number of them in Hertfordshire, and I’ve been astonished by the range of his output. The decision to depict all the buildings on a single scale rather than in perspective grew with the awareness of just how enormous Liverpool Cathedral would have been, and how fascinating it could be to compare the relative sizes of his designs, as there is as much variety in that aspect as there is in their style.”

For more information on how Laubin painstakingly achieved this work with revisions over the year, see his fascinating, detailed blog www.carllaubin.com/projects/lutyens as well as his website www.carllaubin.com.