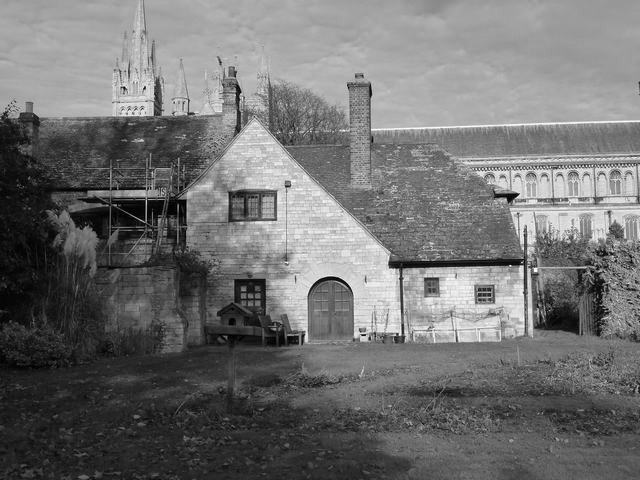 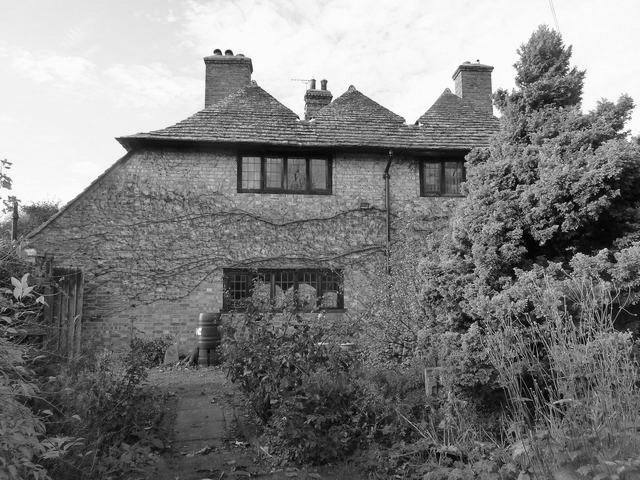 The service wing of the much-altered 11th/12th-century Bishop’s Palace at Peterborough was added in 1897 by Bishop Edward Carr Glyn (1843-1928), newly appointed to the See. An honorary chaplain to Queen Victoria, in 1882 he had married Lady Mary Emma, daughter of the eighth Duke of Argyll, and the sister-inlaw of Princess Louise, Marchioness of Lorne (1848-1939), Queen Victoria’s wayward, artistic daughter who was also an acquaintance of Gertrude Jekyll.

Edwin Lutyens had recently received agreement to his engagement to Lady Emily Lytton on condition of maintaining a £10,000 life insurance policy to protect his bride-to-be. The consequence of this was his obsessive hunt for every potential commission. His marriage was set for 16 August, 1897 at St Mary’s church, Knebworth. That spring he worked on extensions to the Ferry Inn at Roseneath on the Argyll estate. Eustace Balfour (1854-1911), an architect and Surveyor to the Grosvenor Estates, had an Argyll connection and was also a possible contender for the refurbishment of Peterborough. However, the Princess supported Lutyens’s appointment, and in April 1897 he met the Bishop to discuss the project. Even then, after hearing a comment that he would design a ‘cottagey’ building, he feared being ousted by Balfour, but was heartened by Lady Emily’s stalwart support urging him to win ‘by being absolutely businesslike and practical’.

He completed the plans by June. Judging from the microfilm copy from the City Council’s by-law records, the drawings were by Lutyens himself (although not signed). The Cathedral logbook records the new wing ‘containing seven rooms on the ground floor, menservants’ bedrooms, lamp room, dairy etc, and seven servants’ bedrooms on the first floor. The paddock adjoining … was taken into the garden and planted with fruit trees and other special and ordinary trees’. There is no evidence of Gertrude Jekyll being involved. The plans were submitted to the council on 5 August, 1897 and approved on 17 September. The Contractor, John Thompson, of 43 Wood Street, Bretton, had undertaken restoration of the Cathedral.

Lutyens’s design has discontinuity between its elevations, partly mitigated by mediaeval walls and an enclosed garden. The North elevation has a feature gable and an imposing entrance, which 1957 alterations made into a garage access. Nominally a shallow Tudor arch with moulded reveals, the surrounding massive masonry suggests mannerist classicism (almost a decade early). The exaggerated keystone is capped by the moulded sill of the mullioned window above. The gable boldly rises above the single storey of the subsidiary rooms. The tall chimneys of local Fletton Brick reflect a tight budget constraint.

The South elevation faces the open garden from which the cathedral is viewed as a backdrop. Butted against the palace, the dominant symmetrical gable sweeps down exposing the barn-like roof and its hipped end; some affinity there with Munstead Wood (1896-7). The ground floor archway is emphasised with alternating long and short voussoirs.

The north and south elevations are of honey-coloured, squared, coursed and faced Ketton limestone. The roof is skilfully laid in Collyweston stone slates in diminishing courses from eaves to ridge.

The secluded east elevation is something else: exposed Flemish-bonded Fletton Brick throughout. The hardwood mullioned windows have leaded lights. A feature of the prominent five-light window is the relieving arch with the gap over the frame head-packed with tile creasing, a characteristic Arts & Crafts feature. The roof is divided by valleys into three hipped sections. Lutyens was fond of triple roofs, also seen in gabled form at Tigbourne Court, Witley (1898-99) and Homewood, Knebworth (1899-1901); while the Ferry Inn, Roseneath (1896-97) boasts an impressive double-hipped rear roof.

Today the building is used for offices and storage. A few characteristic fireplaces, an altered back stair and some china cupboards testify to Lutyens’s involvement. Overall the building’s architectural mixed metaphors testify to the young architect not being quite settled on his style. Complex, contradictory, but scarcely ‘cottagey’, it earns its protection under the Grade I listing and scheduled ancient monument status of the palace.