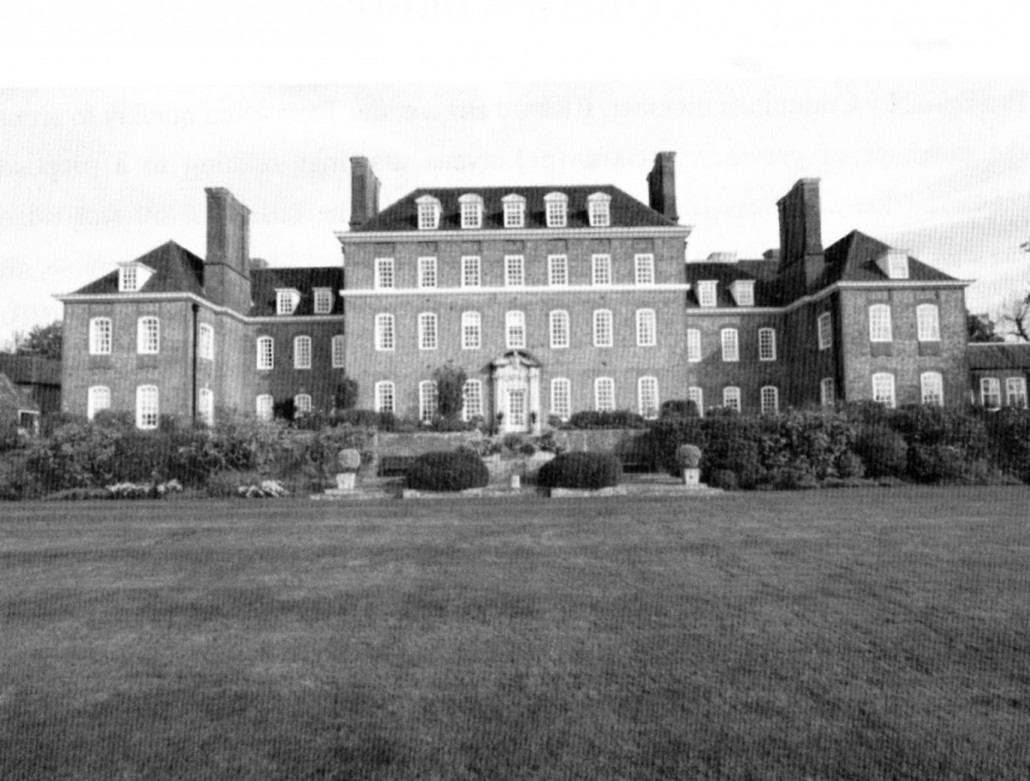 I’m just in love with these all three,

The Weald an’ the Marsh and the Down countrie

Nor I don’t know which I love the most,

The Weald or the Marsh or the white chalk coast

This time, our travels took us to the Weald, to look at two client families and two Lutyens houses, both extensively altered soon after Kipling published his children’s book. The houses were to be occupied by people like Kipling – a neighbour of both – who were newcomers to the area. Co-incidentally, the fortunes of both families were partially founded on the same commodity; bleach. But it is at this point that the similarity ends. Facing each other across the Rother Valley, each house has a completely different ‘feel’ and says completely different things both about its owner and what each wanted from Lutyens as it architect. One house is ‘in’ the Weald; one is ‘of’ the Weald. At heart, the first in an ‘outward looking’ house; the second an ‘inward looking’ one.

Construction of Great Maytham Hall, near Rolvenden, began in the early 18th Century and was completed in about 1760. Further alterations took place in the late 19th Century. In 1909, the estate passed into the ownership of the Rt Hon Jack Tennant, then Liberal MP for Berwickshire, who was to pursue a distinguished parliamentary career, culminating in 1916 with his appointment as Secretary of State for Scotland. Tennant’s great-grandfather had founded a chemical works in Glasgow, the principal and most successful product of which was Bleaching Powder which sold……and sold throughout the world. What interests us is Tennant’s place near the centre of that inter-related network of people – small in number; large in influence – which formed an important part of Lutyens’s client base during those daughters, was married to Prime Minister, Herbert Asquith. Laura, another of his sisters, who had died in 1886, was the wife of Alfred Lyttelton whose home at nearby Wittersham had recently been extensively re-modelled by Lutyens. Laura and Alfred first met through Agnes Jekyll (neé Graham), sister-in-law of Gertrude and whose own sister, Francis Horner, lived at Mells in Somerset where Lutyens stayed on numerous occasions. Francis’s daughter, Katherine, had recently married Raymond Asquith, step-son of Margot Asquith. Agnes Jekyll’s daughter (Gertrude’s niece) had recently married Reginald McKenna for whom Lutyens would later rebuild Mells Park. The complex dance continued.

Great Maytham Hall, a formal and – dare I say it – slightly dull, brick house was reconstructed by Lutyens at a fairly rapid pace during 1909-10. The Georgian aspect and window-spacing, using grey and red brick was continued. A new cornice denoted the original eaves line. In contrast to the north-facing central entrance block of five-bays, the slightly-softer garden front has seven bays and originally sported dark-green shutters and this probably lessened that slight sense of ‘all not quite dressed up but with nowhere to go’ which greets met every time I visit. On this side, because the land fell away steeply, Lutyens added a terrace and a series of steps. Back on the other side of the house, a new entrance gateway was created with a clock-house incorporated into a new stable block. Was this the last stable block – as opposed to garage – which Lutyens ever designed?

Members were invited to view sections of the interior, now mostly converted into flats. The rather stiff entrance hall on the north front and part of the salon on the garden side have been left relatively unchanged, to be used as communal spaces for residents.

Until 1936, the Tennant family continued to live at Great Maytham for part, at least, of every year. But, in the same way that its imported bricks meant that it could be situated ‘anywhere’, the apparent use of the house during those years gives [me] no particular sense that it was an especially-loved family house or that the Tenants’, to any extent, put down roots in that part of Kent. It was a home inhabited by people for whom ‘home’ meant somewhere else (probably ‘The Glen’ in Peebleshire) and whose focus was ‘outwards’ towards other horizons in other parts of Britain and the world. As early as 1913 Country Life seems to have picked up on this aspect, describing the house as slightly resembling a ‘small hotel for a large family’.

Meanwhile, as the builders continued their work at Great Maytham, over a Northiam, on the other side of the valley, the purchase of a quite different house was being negotiated by ‘young-retired’, 43 year-old Nathanial Lloyd and his wife, Daisy. Lloyd has founded the firm of Nathaniel Lloyd and Co, Lithographic Printers and, additionally, had become joint managing director of the Star Bleaching Company. By 1910 he was ready for a complete lifestyle change and planned to reinvent himself as a Country Gentleman. He paid £6000 for the run-down Manor of Dixter, and it may have been his ‘colour-printing’ connection with Edward Hudson of Country Life which led Lloyd to commission Lutyens to restore and ‘modernize’ his new home. Over the centuries the 15th Century open-to-the-rafters Great Hall had been filled in with additional floors and other alterations. These were removed by Lutyens. Next, having added a little to the original structure, Lloyd and his architect tracked down a 16th Century timber house, nine miles away at Benenden. Purchased, dismantled and reconstructed, it formed a yet further addition to the original house. From then on Dixter, late ‘Great’ Dixter, became the principal residence of the Lloyd family.

The garden, much of it designed by Lutyens, completely surrounds the house and now includes a water garden, a tropical garden, a country meadow and much more. The whole family, but most particularly Mrs Lloyd, had a hand in determining the elements of the different sections, kicking off their project with the classic Arts and Crafts formula of topiary among roses and mixed herbaceous borders. The initial theme characterised generally as ‘the old-fashioned garden’ or the ‘Dutch garden’ was the one which Nathaniel Lloyd took for his book Garden Craftsmanship in Yew and Box. It was from these experimental beginnings that the Lloyd family slowly developed its confident and unique style of gardening, plantsmanship and colour combinations, continued triumphantly by Christopher, Nathaniel and Daisy’s youngest son, until his death in 2006. Today, the garden is maintained by the Great Dixter Charitable Trust.

It is difficult to imagine Great Dixter in any setting other than the Weald. Admittedly, while note exactly ‘fake’, there is ‘contrivance’ about it. Nonetheless, it fits perfectly into its surroundings. Here, there is no ‘small hotel for a large family’. Intuitively, Lutyens seems to have understood the emotional needs of a client family who, although in what to us today seems, perhaps, a slightly-idealised, pre 1914-18, way, like Kipling, genuinely wanted to put down roots and to feel that the Weald and this part of the Kent/Sussex border was home. A century later, both the large numbers of visitors to Great Dixter and the instinctive pleasure which the house and garden continues to give them, testify to the fact that this was a commission where Lutyens’s approach fitted perfectly.

Our thanks go to Paul Waite for planning and organising such an excellent day for us and to Sunley Heritage, the owners of Great Maytham, who graciously allowed us to view, not only the exterior, but also part of the interior of this privately-owned property.