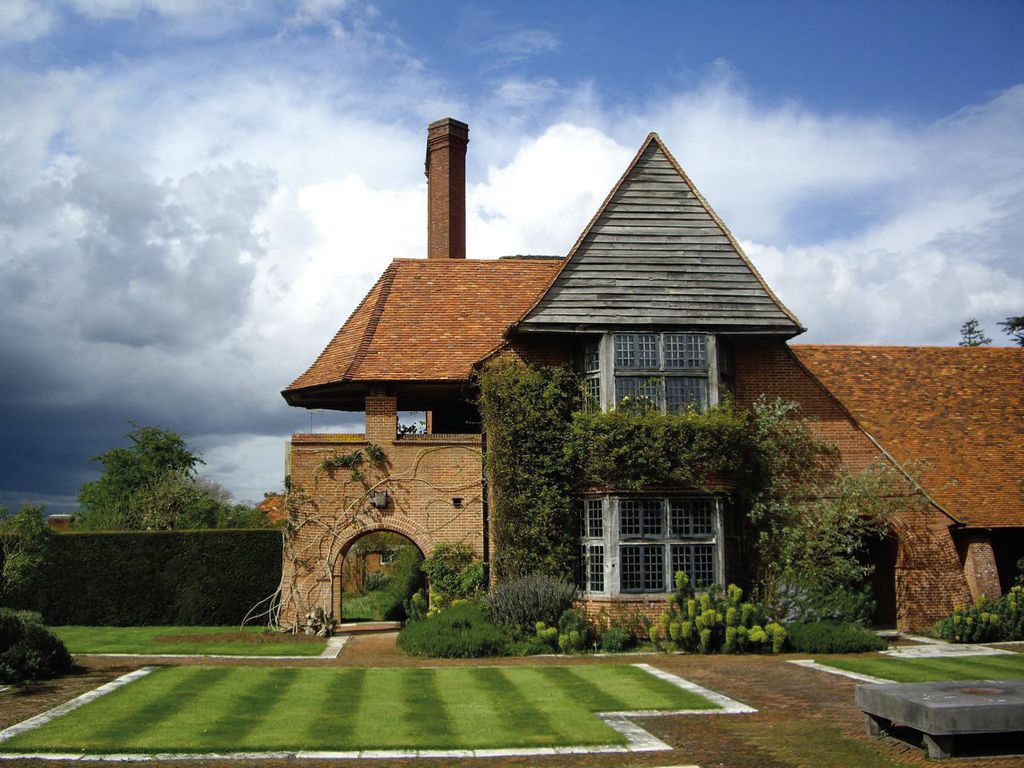 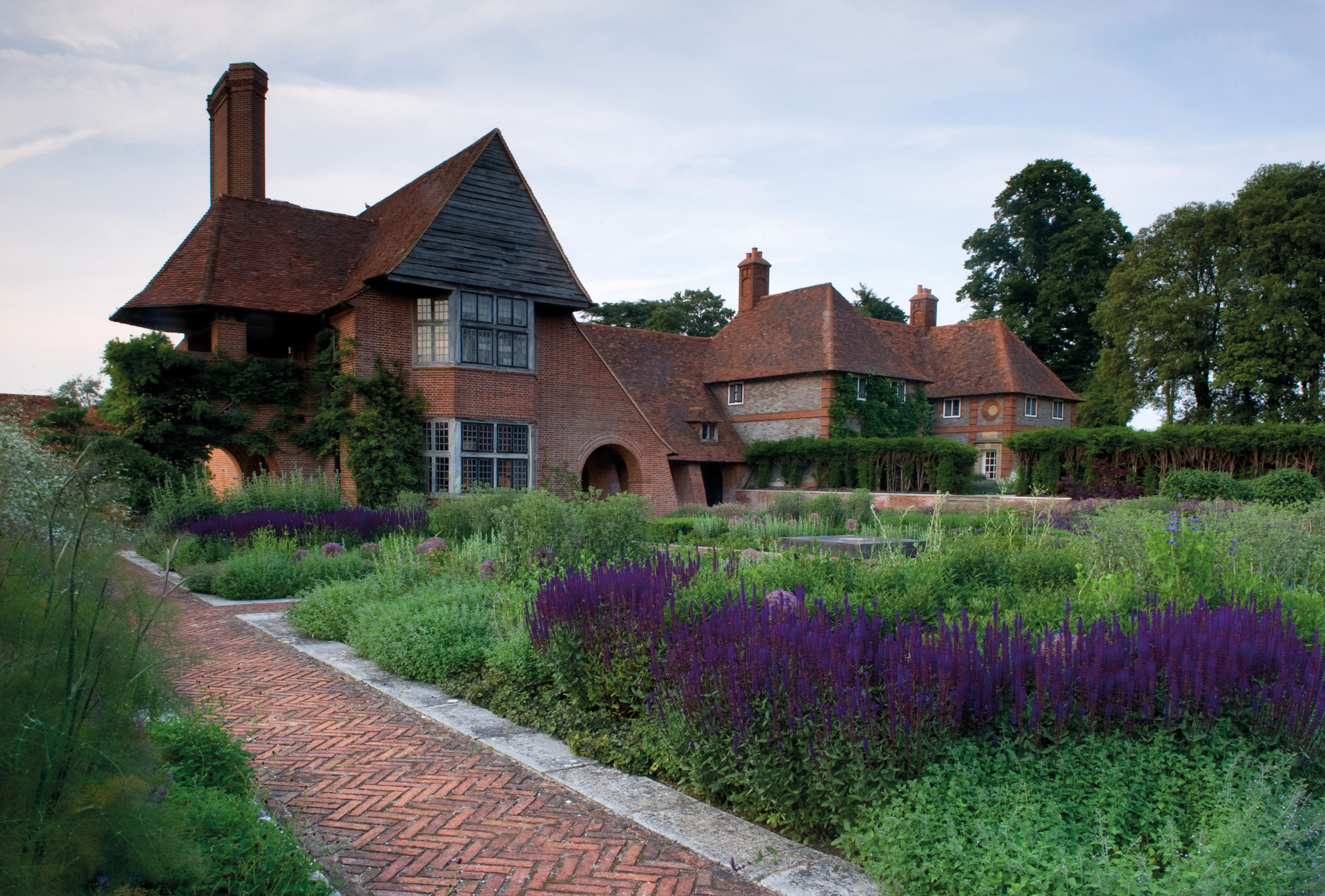 The original William and Mary-style extension of 1906 to the right of the later, 1912 extension 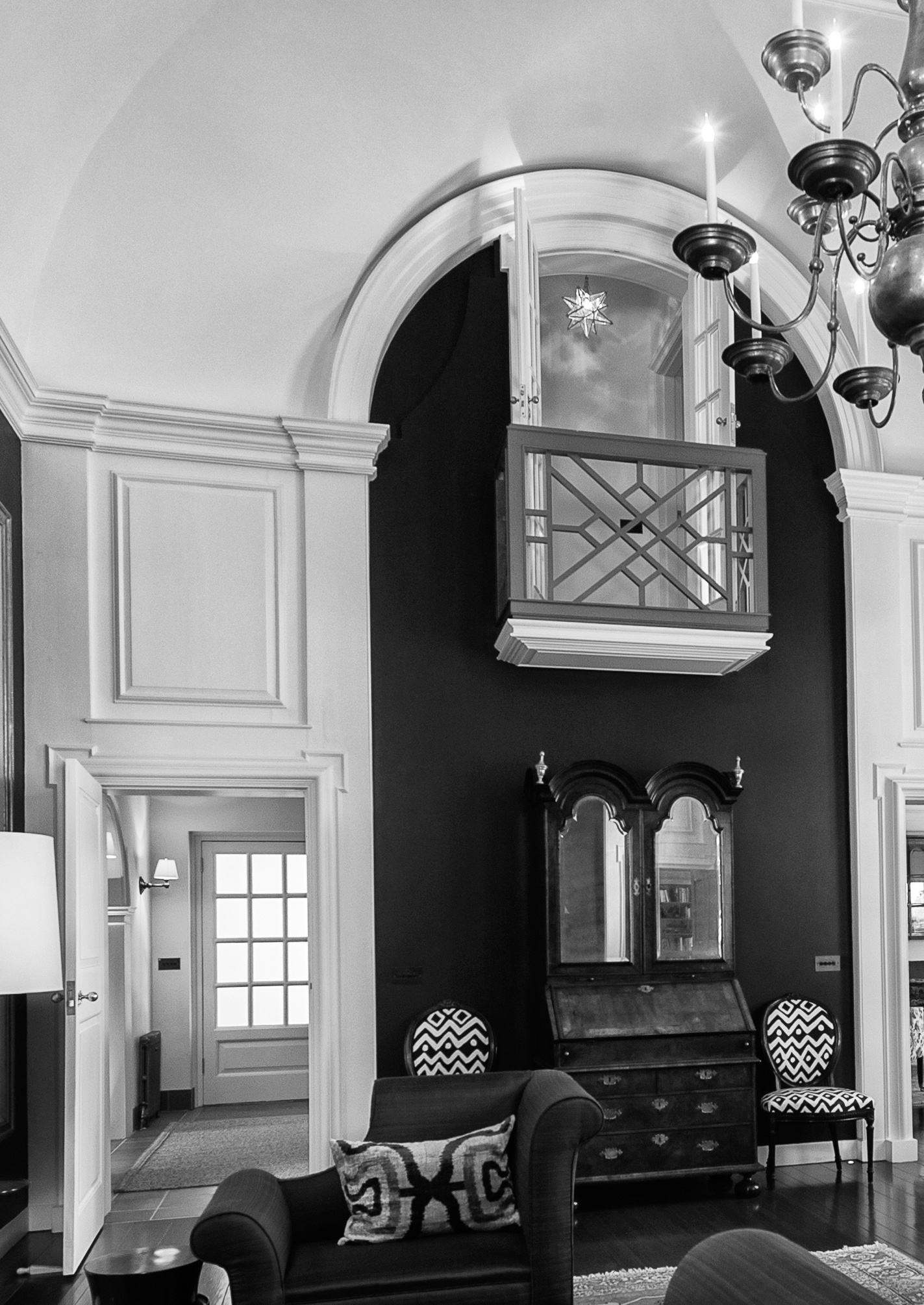 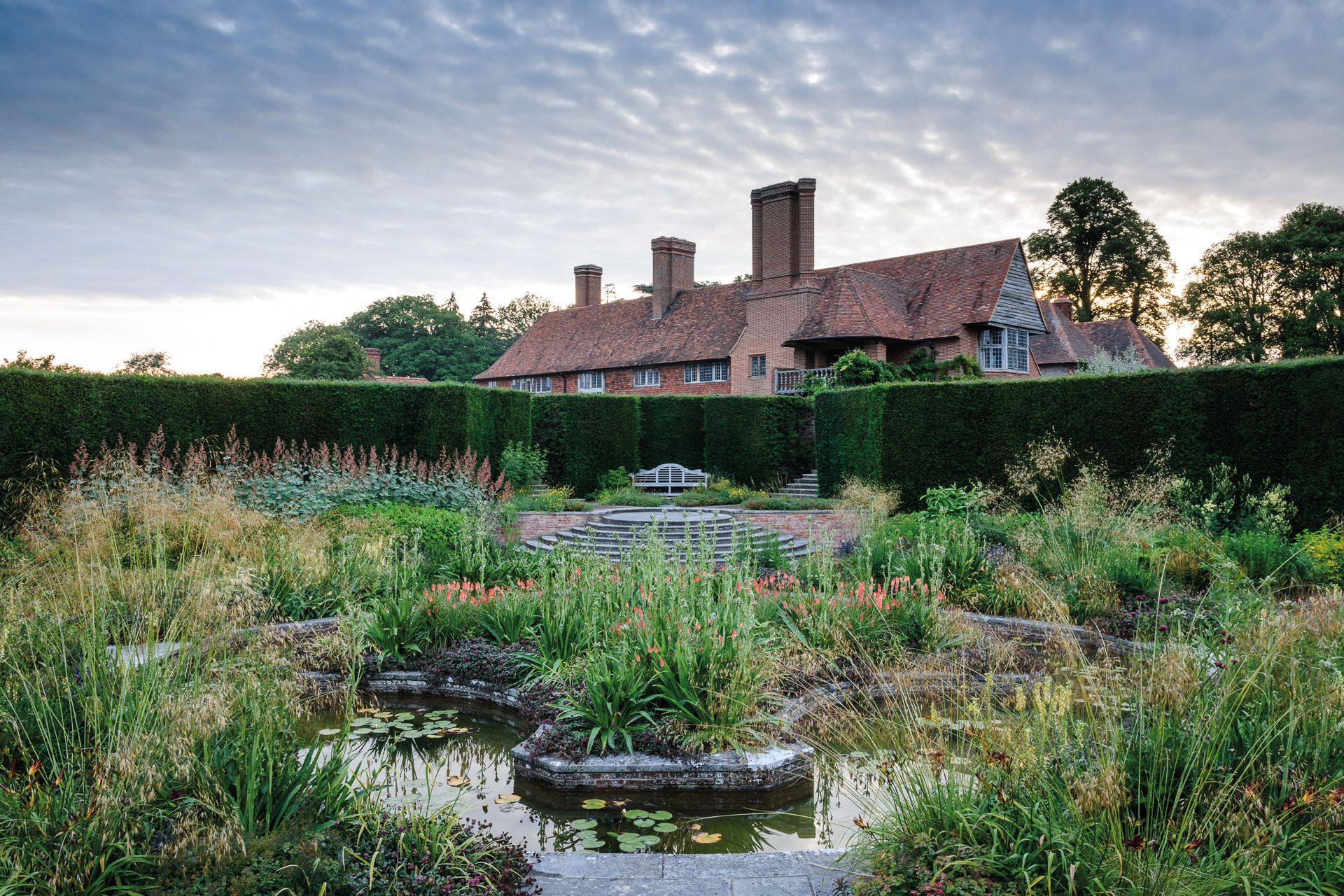 Last summer, members of the Lutyens Trust were welcomed to Folly Farm by the owner, who gave a presentation on its history and recent, extensive restoration. Folly Farm (pictured), originally a modest, timber-framed cottage, was built in the 17th century in the Kennet valley on a site with no distinguishing features. The soil there is very poor, with only a thin layer of topsoil, which perhaps, subsequently, gave Folly Farm its name. In 1905, HH Cochrane bought the property and commissioned Lutyens to convert it into a small country house. Lutyens enlarged the existing building, transforming the original part into the service wing of a new, H-shaped house of grey brick with red-brick dressings containing a double-height hall at its centre. It is a reinvention of the restrained Classical style of the William and Mary period for which Lutyens is said to have coined the term ‘Wrenaissance’.

In 1911, Folly Farm was bought by Zachary Merton, who asked Lutyens to extend it again. In 1912, Lutyens provided a dining room, master bedroom and further domestic services. He also added a large, T-shaped wing incorporating a two-sided cloistered court of monumental, battered brick buttresses which separated the new design visually from the earlier building. Internally, the later design is only connected to the former work by corridors at the ground and first-floor levels. The service areas were moved from the area once occupied by the original cottage, allowing the creation of a billiard room and sitting room. Paradoxically, perhaps, Lutyens designed this in his vernacular style as if it pre-dated his earlier extension at Folly Farm, and referred to the new addition as the ‘cowsheds’. As if to emphasise the formality of this earlier work, the new one is set down a level, making use of a gentle slope; the new creation is about mass and solidity, with its huge catslide roofs and monumental chimneys. Gertrude Jekyll was employed to design the gardens.

Successive owners altered the house to suit their needs: chimney stacks were removed, fireplaces lost, rooms subdivided, a staircase moved and, most significantly, the balconies in the hall removed. Moreover, after decades of alterations the hard architecture of the garden and the planting were in much need of attention.

Thankfully, our host was determined to restore Folly Farm to its former glory. In the process, she had clearly become enthused in her research (which undoubtedly helped with discussions with the statutory authorities). Architects Michael and Frances edwards were retained to restore the house and landscape designer Dan Pearson the garden. The most significant problem was the access to the house, which had been blighted by the increase in motor traffic in the 20th century. This has been resolved by forming a new door in the original cottage without compromising Lutyens’s work. Members were given tours of the house and gardens by Michael and Dan respectively.

Michael and project manager Nick Snashall explained the care that had been taken to restore the original features. Of note was the painstaking work to recreate the house’s William and Mary-style staircase. relying on the original 10 by 8-in glass- plate photographs held in the archive of Country Life and steel-engraved plans that edwin Lutyens chronicler Lawrence Weaver had made, Michael was able to restore the baluster mouldings containing references to ‘apples and pears’ that Lutyens had originally used. Computer-modelling was used to determine their exact size.

Our tour of the house began in the restored hall where the walls have been redecorated in the original black scheme with a green lacquered floor and the red Chinoiserie balconies (pictured) have been recreated. The whole effect was stunning.

The reinstated staircase was closely examined and much admired, too. The tour continued through the modestly sized sitting room in one wing and library in another, then down the corridor into the 1912 extension. Here, in the original dining room, the fireplace has been restored. The room had been subdivided and the fireplace opening blocked up, but it has since been rediscovered with its tiled reveals and stone hearth intact. The marble mantelpiece has been reproduced in Carrara and Cipollino marble. This floor-to-ceiling design is an incredible tour de force.

We then progressed to the first floor up a Lutyens-inspired staircase, which had been inserted by the architect, Francis Pollen, in the 1960s. not all the alterations have been completely undone, and here windows that had once been external were revealed to look in over the staircase, which made for a happy compromise. We were allowed access to the master bedroom with its sleeping balcony that enjoys views over the gardens and meadows beyond. There is a huge bay window at one end, and the ceiling punches upwards into the roof space, its oak beams exposed. There are also two wonderfully oblique oak corner cupboards, one of which was opened to reveal a sumptuous basin and mirrors. The first-floor corridor (pictured) links back into the William and Mary building where we made a detour to look down from the newly built oak gallery that looks over the new front door into the house. Finally, we returned down the ‘apple and pears’ staircase and back out of the original front door, passing through Lutyens’s clever offset device — an asymmetric entrance.

The original garden comprised a number of ‘rooms’ (divided by hedges), including the famous sunken-pool garden, flower parterre and Dutch canal and as such they are inward-looking. Dan has restored and replanted these, but also extended new areas to connect into the landscape beyond with wild flowers and grasses. Drainage and irrigation of the site also had to be resolved and this was done by creating a new lake and watercourse; the canal, tank (rectangular pool) and other water features now have a constant, even supply of pumped water. The kitchen garden and greenhouses have been restored and planting transformed with a new scheme, providing lavender, cut flowers, fruit and vegetables. The whole garden was a delight.

At the end of the visit, Martin Lutyens thanked the staff for their part in organising such an informative tour. Members were very appreciative of the owner’s generosity in allowing us access to the property and hospitality — we were also invited to a splendid lunch. The day really was something special.

Christmas lunch at the Bloomsbury hotel