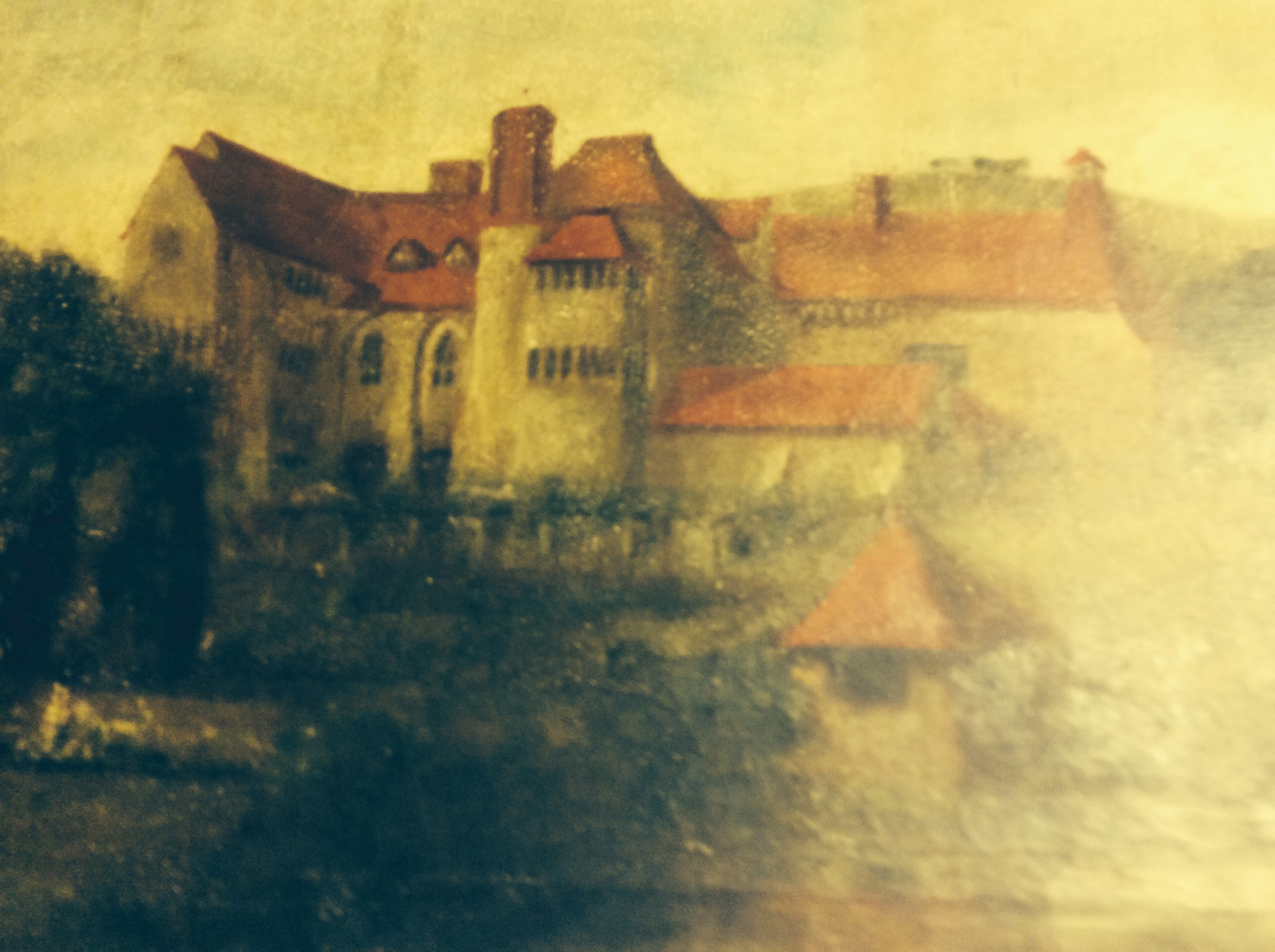 A painting of Chinthurst Hill, courtesy of Tim Matthews. It was commissioned (or possibly painted) by his wife’s grandmother Maggie Elliot, née Guthrie

Our visit to Chinthurst Hill began in the morning with three talks to give us some background. The first, given by Russell Morris, spoke about Chinthurst and the contemporary architectural scene, showing a range of country houses in the surrey area built in the mid 19th century. This was useful in showing the contrast between those by norman shaw and Lutyens’s more natural way of building. Then Sarah Sullivan spoke about the Arbuthnot/ Guthrie family of upper House, followed by Michael Edwards who described his own work in restoring Lutyens buildings – “without compromising Lutyens”.

Our visit to Chinthurst Hill in the afternoon was one of our best. I had only been there in the past when the house was divided into three and when the kind Moeller family had the hall, drawing room and library wing. so to see it restored and reinstated as one house was a new experience.

In 1893 Lutyens had received the commission from Miss Aemilia Margaret Guthrie, whose mother, Ellinor Arbuthnot, was a cousin of celebrated gardener Harry Mangles, to build a substantial house on a fine hillside overlooking the Wey Valley near the village of Wonersh. It was his largest commission to date.

It is a complex building, rambling in its composition, suggesting, as Hussey has said, “a medieval manor house altered in elizabethan times”(1). Miss Jekyll, as Francis Jekyll describes, watched its progress across the valley with interest, noting “the bold experiment” where the unsuspecting visitor entering the front door at the back of the house at ground level then passed through to find himself surveying a panoramic view from the main rooms on the first floor (2). We too entered from the back, through the vestibule and into the hall, a Gothic hall with two bays of oak, arched-braced roof, windows with flamboyant Gothic tracery and a large open fireplace. Altogether a very medieval experience. Then, for the first time, we could turn to the left to enter the dining room, which for many years had belonged to a different owner. It was full of light, its windows forming a large, square bay next to the fireplace. We were then allowed to go all over the house — to the drawing room overlooking the view, the library and bedrooms including the main bedroom with its stylish Art Deco bathroom (not by Lutyens!).

The interiors are elaborately detailed with oak panelling, a fine oak staircase, fireplaces with Dutch tiles and door furniture shaped like dolphins and dragons designed by Lutyens. The quality of all the detailing is superb. We then went outside to the terrace and walked along the borders towards the new summerhouse. Miss Jekyll had designed the planting for the terrace and borders and all this has been reinstated.

However, as a client, Maggie Guthrie, as she was known, had shown very little interest in the house while it was being built. she had been studying in London to be a doctor and Chinthurst was finished at around the time she qualified. According to her sister Violet’s memoirs, she came home to a house which horrified her. As Jane Brown has related, “she thought it all back to front with too many rooms facing north, which the secondary bedrooms and staff rooms did, and she apparently paid off the architect” (3). Perhaps she disliked the fact that the front door was at the back but she must have seen that all the principal rooms and main bedrooms faced south over a glorious view. Another source reveals that Lutyens took no money from her to protect his reputation — a wise move, given his close-knit circle of clients (4). More likely reasons are that her fiancé, Ninian Elliot, did not like the house, and that he wanted to move to scotland after their marriage in 1896.

Her criticism may have affected Lutyens’s wish to mention or publicise the house as he usually did. Chinthurst Hill was not included in Weaver or in Butler’s Architecture and when it has been mentioned — as by Hussey or Pevsner or in recent literature on Lutyens — it has received a fairly cool reception. Hussey summed up the impression it gave that “the young Lutyens was experimenting in materials and techniques at the cost of coherent design” (5). The house is complex, to be sure, but I feel that Chinthurst is all about the game of building vertically as well as showing his skill in using materials. It is built of Bargate stone, a very local material, the stones becoming gradually smaller towards the top of the building — as the owner, Anna Hunter, told us. It is set into the hill and jetties out at different levels and there is great play with buttresses, chimneys, steps and terraces.

When Lutyens later drew details of the house in sketches which he sent to Herbert Baker, recording his latest work in the years 1892 to ’94, he focused on the broad massing of the side elevation and the steps leading down to the terrace as well as the hall windows which create a small cloister at ground level on the south front (6).

Chinthurst Hill was sold in 1897 to Lord Rendel of Hatchlands as a home for his widowed daughter, rose, and her son Harry, the architect HS Goodhart-Rendel. His type-script memoirs record his pleasure as a boy in the house’s eccentricities — the complicated roof, a window peering into stairwells from a hidden passage and the enormous open fireplace in his lair, the garden room, the former smoking room. He also recalled the house’s deficiencies, the fact that every fireplace smoked and all the windows let in the wet. But for him it was also “an architectural symbol of life and adventure” and that it was the “adventure” of this early house that made him become an architect (7).

We are really grateful to Anna Hunter for allowing us to visit Chinthurst and particularly to be able to ramble all over her very beautiful house. she did us proud with a splendid tea, cakes and drinks on her terrace on a fine summer afternoon.