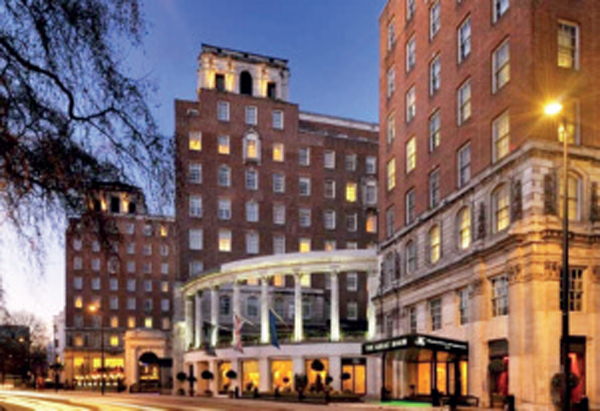 A Walk Around the Grosvenor Estate

Detmar Blow, an old friend of Edwin Lutyens, had become in the 1920s the Duke of Westminster’s private secretary and manager of the Grosvenor Estate. He often brought in Lutyens to act as a consultant architect. Lutyens did no more than improve or redesign the elevations. Our walk around the estate last year took a look at all of Lutyens’s work there. My research to prepare for this was based on the volume, Survey of London: The Grosvenor Estate of Mayfair.

Our walk started at Aldford House, on the corner of Park Lane and South Street, where Lutyens added classical aedicules, and then took in Blow’s No 28 South Street, a splendid, very early example of Lutyens’s “Wrenaissance” style of 1902 to 1903, one of the first of its kind in London and well ahead of Lut’s Country Life building of 1904. Then came No 38 South Street by Wimperis & Simpson and John Murray Easton, built in an elaborate Neo-Georgian idiom – the leading style of the Grosvenor Estate. Further along was Nos 56-58 South Street, a mews refronted by Lutyens from 1935 to 1936, which is generally unknown.

We then turned into South Audley Street where we saw Nos 17-22 (now the premises of tableware emporium Thomas Goode), designed by Ernest George & Peto from 1875 to 1891, the firm’s first full essay in Queen Anne and the first example of the style on the Grosvenor Estate. Then came No 8 Upper Grosvenor Street — a real find. The house was extensively remodelled from 1927 to 1928 by J Edwin Forbes and J Duncan Tate but the design for the new front elevation, with its added fifth storey, was supplied by Lutyens. The scheme has not been recorded in any literature
on him but is one of his best designs: it’s representative of his elemental way of building with its unadorned façade of Portland stone featuring sharply cut windows and shallow, recessed panels on the top storey. Audley House at Nos 8-10 North Audley Street was built from 1927 to 1929 in the Neo-Georgian style and, again, Lut only designed the elevations. It, too, deserves to be better known.

Gamages (now occupied by Primark) at Nos 499-521 Oxford Street was designed as a department store with flats above it from 1928 to 1929. The architects were Messrs Joseph with Lutyens as the consultant architect for the elevations. He again adopted the Neo-Georgian style for this immense block which he broke up at the rear by dividing it into three high sections with aedicules. The Oxford Street façade is symmetrical with high end bays, again with aedicules. Sadly the centrepiece has been changed.

We ended the walk at Grosvenor House in Park Lane, built from 1925 to 1930. The Grosvenor House, Park Lane, built from 1925 to 1930. The architects were Wimperis, Simpson & Guthrie. Leonard Rome Guthrie had already designed the scheme to be built in four staggered blocks. But his elevations were deemed fairly dull, so Lutyens was called in to improve them; he did so by adding crowning pavilions and revising the elevations which have great finesse, with the windows rising in diminishing sizes.

Talk by Dr Mervyn Miller: Lutyens in the City of London – A Joint Event... Scroll to top
This website uses cookies to improve your experience. We'll assume you're ok with this, but you can opt-out if you wish.Accept Read More
Privacy & Cookies Policy