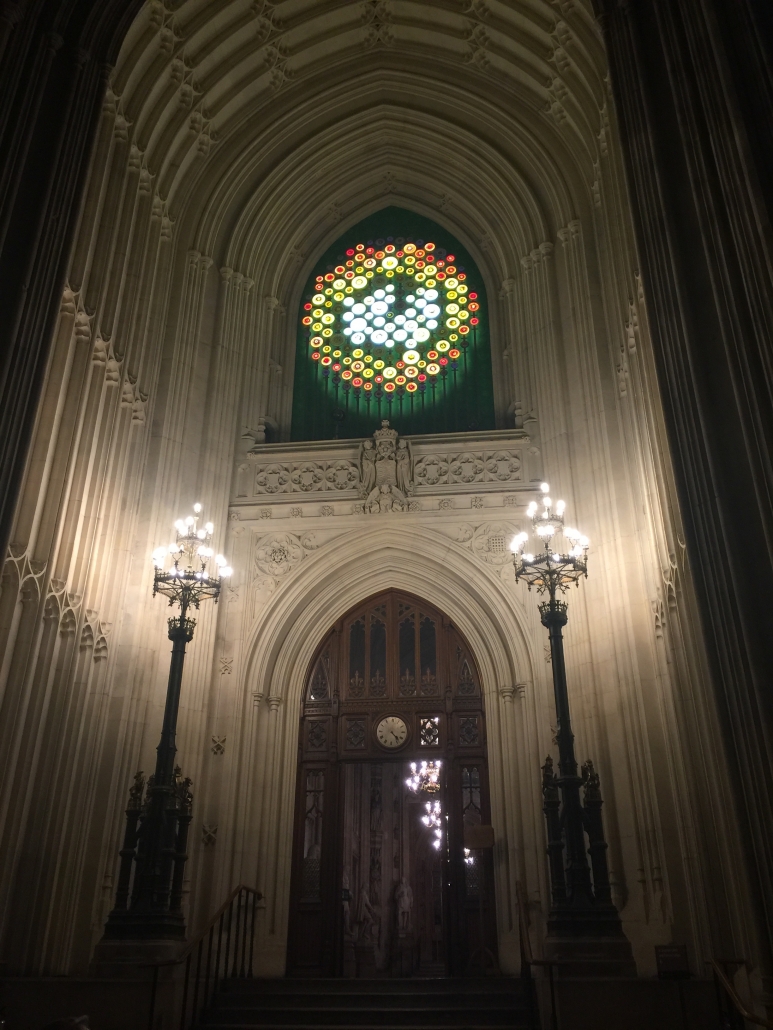 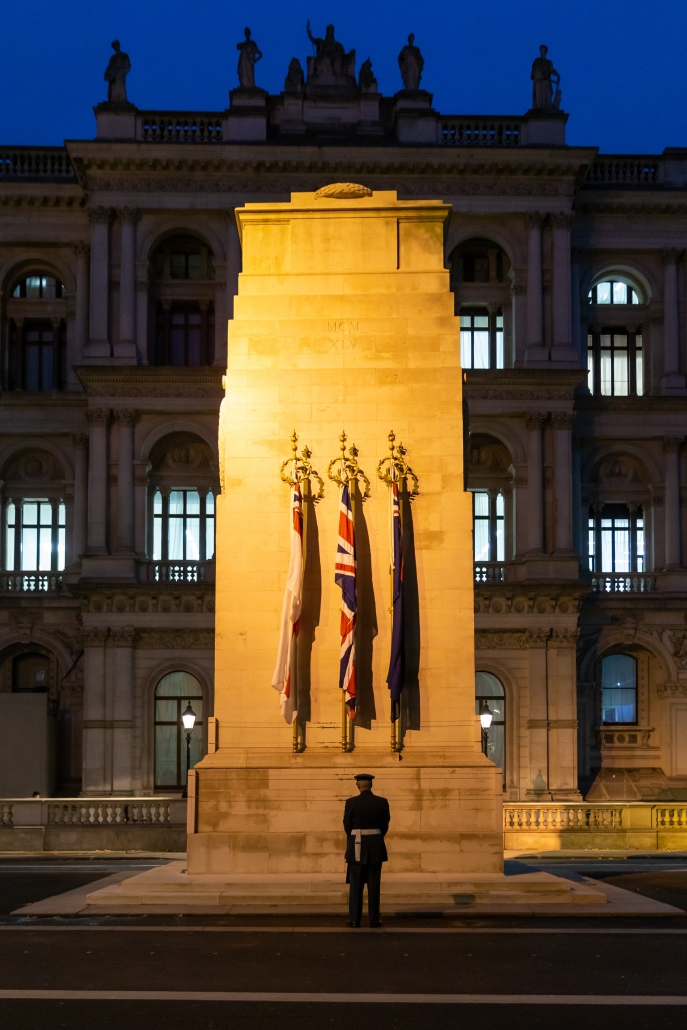 A lone, reflective guardsman stands before The Cenotaph © Stephen Williams

It was a privilege to be one of the 12 Trust members to visit the Houses of Parliament at the Palace of Westminster. On arrival, the architectural lead Julian Flannery and Claire Reed, Collections and Heritage Design Manager for the Palace of Westminster Restoration and Renewal Programme, gave us a brief historical overview of the Palace of Westminster, from its origins in the 11th century to Charles Barry’s mid-19th century competition-winning design for a new Gothic-style palace to replace the building almost totally destroyed by a fire in 1834. Barry designed it in collaboration with Augustus Pugin.

Since its construction, the building has been continually patched up with more extensive repairs following bomb damage suffered during the Second World War. However, at the start of 2018, both Houses of Parliament voted to move out of the iconic buildings temporarily in order for a full renovation and renewal programme to take place. The works will include everything from replacing antiquated services, increasing and restoring daylight into the heart of the building and improving access for the disabled. There will be comprehensive internal and external conservation works as well as an upgrade of fire-safety systems and communications technology.

Our tour began at the Victoria Tower, one of the palace’s main three towers, which houses the Parliamentary Archives, where Julian explained some major problems that require attention. The Anston limestone from Yorkshire on the exterior, chosen by Barry, was bedded incorrectly during construction and has suffered badly from pollution, causing widespread spalling. Once inside and following important security checks, we were ushered into lifts that are in need of upgrading to improve disabled access.

The building’s internal layout follows the royal procession route of the monarch from arrival at the Sovereign’s Entrance then to the Norman Porch and into the Robing Room through the Royal Gallery and Prince’s Chamber before arriving in the House of Lords. Claire captivated us with information on the original internal decoration overseen by the Fine Arts Commission and led by Prince Albert. The decoration ranges from the Arthurian-influenced frescoes in the Robing Room to Tudor-style paintings by Kensington School of Art students in the Prince’s Chamber. The internal decoration is in as much need of restoration as the structural aspects, and Claire explained the variety of methods employed over many decades to undertake this, including use of silk dusters to flick dust away to an unsuitable paraffin-wax coating. The current programme of works will combine conservation treatment to remove any surface dirt and utilise specialist lighting to enhance the interior’s original colour and detail.

Claire also drew our attention to the wonderful Minton encaustic floor tiles throughout the Palace, now undergoing their third set of replacements, the metalwork by John Hardman and wallpaper supplied by John Gregory Crace, much of which Pugin designed. In the House of Lords Chamber, we saw the culmination of the Barry/ Pugin collaboration in the magnificent Sovereign’s Throne, with its elaborately carved woodwork inlaid with rock crystals and embroidered seat and back. Julian explained the conservation issues in the Chamber, ranging from the need to clean the high-level detail through to improving the cold, harsh lighting originally introduced when the Lords was first televised.

Julian explained another challenging issue — the need to upgrade the ventilation systems. Originally designed by David Boswell Reid, these involved admitting fresh air via large shafts in the Victoria Tower to be distributed through a network of basement shafts. However, the result is that 15 to 20 per cent of space in the Palace of Westminster contains ventilation voids, all of which need to be fitted with firestops to prevent a disaster such as the one that befell the Glasgow
School of Art.

Another fascinating part of the tour was the Pugin Room with its wonderful view over the Thames. It had been refurbished in the 1970s with the recreation of wallpaper to an original Pugin design, the installation of a magnificent brass chandelier from Alton Towers and addition of portraits of Barry and Pugin and his wife, Jane. On a more functional level, our party was equally enchanted by the row of numbered cloak cupboards lining the Cloak Corridor.

Barry designed the octagonal Central Lobby to link St Stephen’s Hall — built in 1834 on the site of St Stephen’s Chapel where the House of Commons had stood for over 300 years — with Westminster Hall and created the main meeting point for both houses which now has other uses, such as outside TV broadcasts, the gallery ticket office and a post office for members. Four large mosaic panels represent the four constituent countries of the UK.

From here we moved to St Stephen’s Hall, where brass studs on the floor mark the position of the Table of the House and the Speaker’s Chair. Claire explained that the walls are decorated with storybook panels showing the building of Britain.

As we walked from St Stephen’s Hall to Westminster Hall, we looked up at “New Dawn”, a contemporary light installation by Mary Branson celebrating women’s suffrage, which changes over a 12.5-hour period linked to the Thames’s tidal movements.

Our visit concluded in Westminster Hall, the oldest building in the complex with its magnificent hammer-beam roof, the largest clear-span medieval roof in northern Europe. The Hall is the only space in the Palace where both houses of Parliament can gather and has been the scene of many significant events, such as Barack Obama’s speech to both houses in 2011. The statues of kings in the alcoves are particularly special as it is rare to have secular statues dating from the 14th century.

At the end of our visit, we stepped outside to look up at the Elizabeth Tower, better known as Big Ben and currently shrouded in scaffolding. Appropriately, after thanking Julian and Claire for an amazing tour, we headed for a drink at Maison Assouline, the bookstore and bar, formerly the Midland Bank designed by Edwin Lutyens in the early 1920s. On the way there, we walked down Whitehall to admire his Cenotaph and pay our respects two days before the Centenary of the Armistice, a sight made more poignant by the presence of a lone serviceman standing in silent reflection at the base of the monument.

Our thanks to Rebecca Lilley for organising the tour and to Paul Waite for leading it.

A Revised Expanded Edition of the Book Gardens of The Arts & Crafts Mo... Scroll to top
This website uses cookies to improve your experience. We'll assume you're ok with this, but you can opt-out if you wish.Accept Read More
Privacy & Cookies Policy