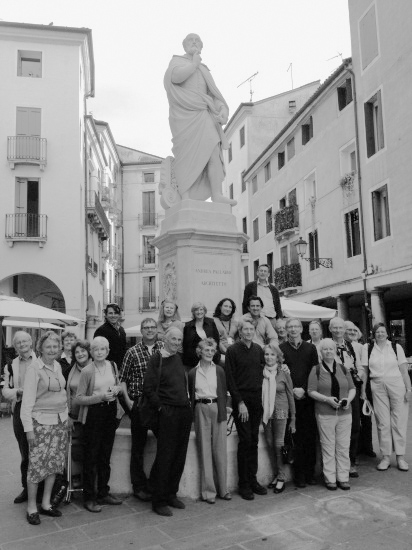 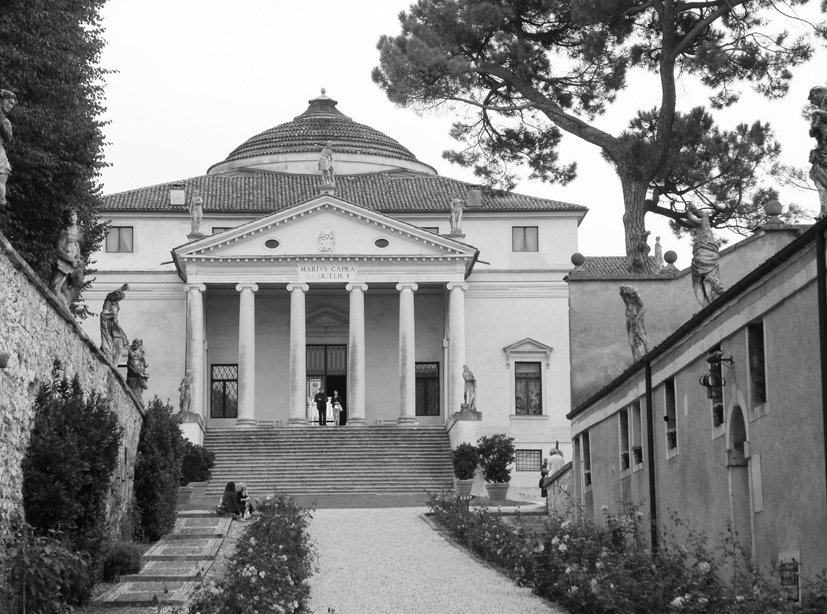 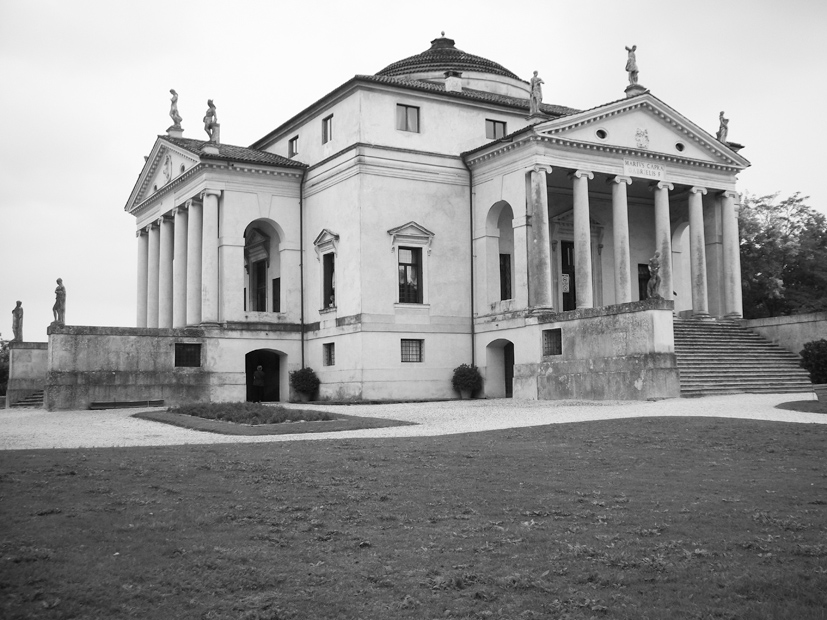 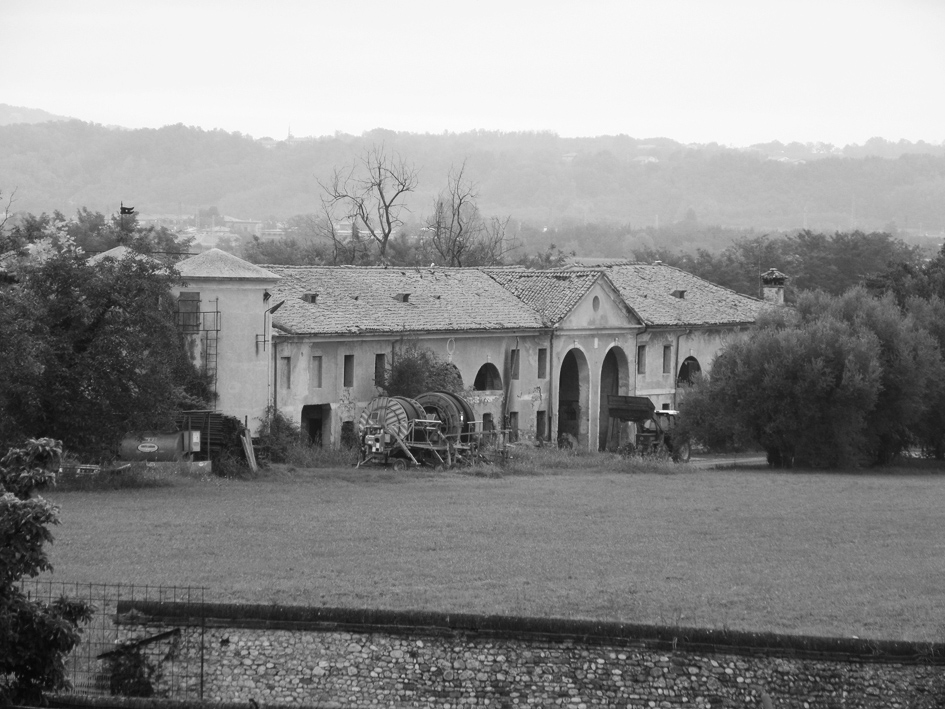 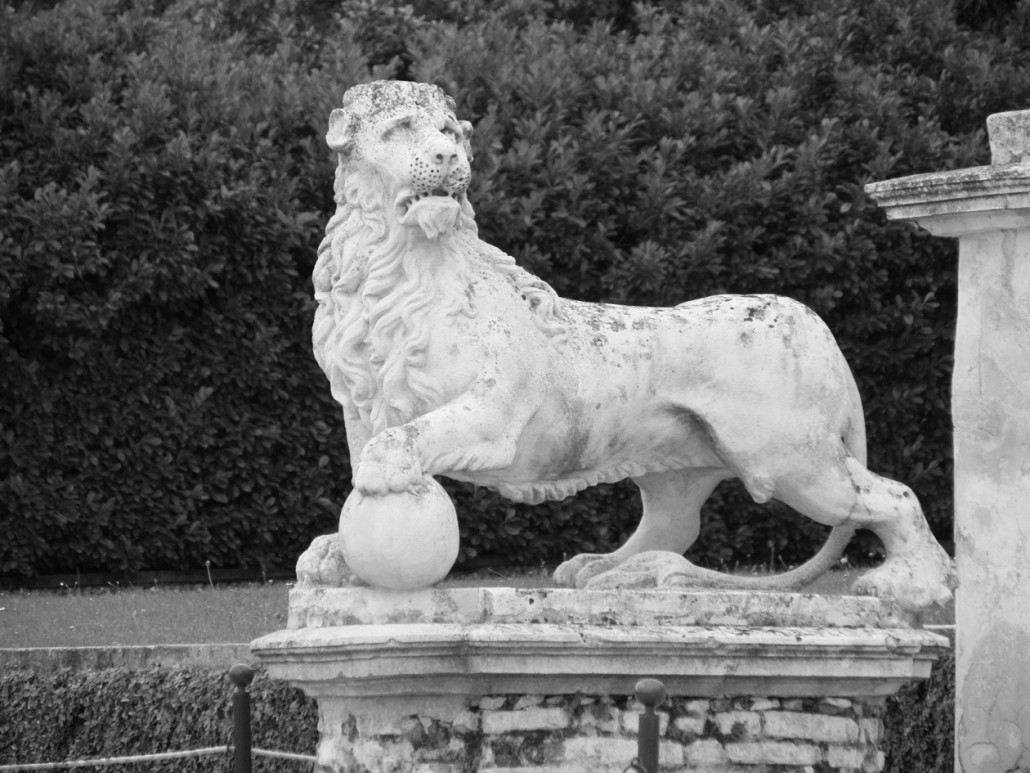 Our week-long visit started by spending the first day and a half on a guided walking tour around Vicenza, a remarkably compact town about the size of Winchester where huge Palladian palaces mingle with older Venetian Gothic facades. Giovanna, our local guide who had been brought up in Vicenza, also took us to an historic portrait exhibition in the basement of Palladio’s Palazzo Chericati where she pointed out contemporary paintings of many of Palladio’s clients. Several of the town palaces had been destroyed by Allied bombing at the end of the war, several were only facades but most were in excellent condition showing signs of having been restored recently. We examined the exteriors and passed through the courtyards with interior visits to the two most complete, the Palazzo Thiene and the Palazzo Barbarano. The Palazzo Barbarano opened only the week before as the Palladian Museum and we were privileged to visit the private bank interiors of the Palazzo Thiene, which were full of art and furniture of the same period. Our only difficult moment was in the Teatro Olimpico where two Italian tour guides in full flow of Italian competed with poor Giovanna to talk over her soft voice.

Lunches of local specialities each day were a feature of the visit, usually three to four courses, from the first day where it took three hours to the one day when we were so rushed that, rather than skip a course, the veal and the duck came out on the same plate.

After the second day we boarded a coach to visit various properties in the countryside around Vicenza for three days, all designed by Palladio with the exception of the superb Villa Cordellina that was in the Palladian tradition but a hundred years later. We looked at villas designed before Palladio’s sponsored visit to Rome, then how his work altered as he incorporated elements that he had seen, then measured, in Rome. It was a tight schedule with five to six villas a day, from immaculately maintained with lavish gardens to the long abandoned villa Gazzotti that had been used as a barn until recently and was especially opened for us, with chickens running in the grounds. For the country villas. although most of us expected the villa Rotunda to be the highlight and it did not disappoint, it would be difficult to say that one was superior to the others. The villas varied from houses that were lived in full time, villas that were used in the summer only and villas that had long since been abandoned by their families. There was a fascination about Villa Porto where although the farm buildings surrounded the house in an inviting courtyard, only ten brick portico columns towered at the open end. We lingered far too long looking at the sophisticated beauty of Villa Maser and the elegant simplicity of Villa Emo appealed to our English sensibilities but the villas that are now not lived in, Villa Poiana or Villa Caldogno a Caldogno, were somehow easier to appreciate bared of any furniture or complex surrounds. Those used as summer homes, Barbaro Maser, Villa Pisani a Bagnolo or Villa Malcontenta, had plainness in their furnishings that didn’t compete with the rich frescos but complemented the architecture in the same way as the empty villas.

Perhaps one of the favourite visits was to Villa Cornaro a Piombino Dese where a couple from Atlanta Georgia had bought one of Palladio’s first double porticoed houses to live in for four months of the year. It was a favourite partially because the house was opened especially for the group, partially because it was one of the few Palladian houses to be frescoed with religious, rather than mythological subjects but mainly because Mr Gable and his wife were so welcoming and gave such a fascinating tour.

On the Friday there was a morning free for re-visiting town properties or relaxing but several of the group took the opportunity to visit Verona by train where there are not only the houses of Romeo and Juliet and the best local gelato but also Sanmichele’s Porta del Palio, the inspiration for Lutyens’s Heathcote. That afternoon the group took the train en-masse, managed a fast change at Padua with the entire luggage and arrived in Rome that evening.

The next morning we were welcomed at the British School at Rome by the Director, Professor Smith, his wife and the librarian of the Institute. We toured the building, originally designed by Sir Edwin in 1911, as the British Pavillion at the Rome International Exhibition, meeting one of the artist scholars and taking in the new auditorium and library extension. Laid out in the library were photographs of the school as an exhibition building, a view of the surrounding countryside and then some interiors and exteriors when the exhibition building was rebuilt as the school. It was noted that the two facades were exact copies other than the fact that there were three Royal coats of arms on the facade of the original building, one in the balustrade of each pavilion and one in the pediment, but none on the existing one. Finally the group was offered prosecco and Martin Lutyens was asked to unveil two plaques on the front of the building, one giving the name of the school in English and the other in Italian. Then it was on to our final lunch at the Gallery of Modern Art next door where several of the group were disappointed to have only two courses, rather than the now expected three or four.

A Tribute to Lutyens’s New Delhi