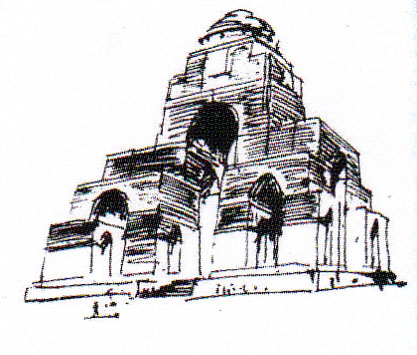 Lutyens’s sketch for the war monument at Thiepval

When Sir Frank Sanderson and Col. Pien Storie-Pugh met on 1 July 1998 at the annual Thiepval Ceremony (the anniversary of the first day of the Battle of the Somme in 1916), they came to the conclusion that many of the visitors who turned up at Thiepval were relatively unaware of the momentous events which lay behind the construction of Lutyens’s Memorial to the Missing. They discussed the idea of a visitor centre with Mike Johnson of the Commonwealth War Graves Commission in France.

This idea turned into a Franco-British joint project, its cost to be shared equally. The Conseil-Général of the Somme became responsible for its construction and subsequent management, under the auspices of the Historial de la Grande Guerre at Péronne while a Fund Raising Committee was set up in Britain under the chairmanship of Frank Sanderson which undertook to create the educational content of the building. The eventual cost was £ 1.83 million pounds. In Britain there were over 2,000 donations.

The Duke of Kent agreed to become a Patron and he officially inaugurated the Centre on 27 September. An architectural competition was launched, attracting both French and British entries. A Franco-British jury met at Amiens which included Paul Lutyens, an architect based in Paris, Frank Sanderson and myself as the representative of the Lutyens Trust. While we did not vote for the eventual winner: Nicolas Ziesel and his team from Paris, it became clear that our preferred architect had built in too high a contingency figure to meet the notional budget. In the event, Ziesel’ s restrained, modern glass box became the model for the eventual building. Much debate on the detail inevitably ensued. What we have achieved is to ensure that the building has been sunk and, with its car and coach parks, has been concealed by earth banks so that it has become unobtrusive in the big, open landscape of the Somme and does not vie with the Memorial. A notable feature of the Centre, underpinning as it were the glazed expanses, is the use of small, mellow bricks, suitably bonded. which pay homage to those originally chosen by Lutyens for the Memorial but perforce replaced in the 1980s owing to corrosion caused by exposure to the fierce Somme winters.

We chose Graham Simpson (Cube 3 Exhibitions) as our designer who then brought in his associates M2 for the graphic design. As the exhibition design evolved, it became more than a display to explain the Battle of the Somme and its context in the Great War (texts written by Nigel Cave with Peter Simkins) to include sections devoted to its aftermath. ‘Remembrance’ and ‘Civic
Memory’ show how the Fallen were movingly honoured in France and at home with dignified cemeteries, monuments and memorials of great gravity and diversity, employing the leading architects and artists of the time. ‘Commonwealth War Graves Commission’ describes its admirable role ensuring that soldiers buried where they fell would never be forgotten. ‘Reconstruction’ illustrates the tremendous task of repairing the widespread devastation of Northern France.

The Centre moreover gave the opportunity to create a section devoted to Lutyens, to make all aware of the genius who was responsible for the extraordinary memorial which they have come to visit. The centrepiece of the exhibition is the splendid new model of the Thiepval Memorial, commissioned from Andrew Ingham & Associates. Until the National Trust achieves its proposed Lutyens museum at Castle Drogo, this is the only permanent exhibition devoted to him. Another attraction of the Centre is the cinema which shows films created by M2  based on the displays and they have equally produced an excellent, fully illustrated guide as a souvenir of the visit which is available in the shop at €7.50 and at the Imperial War Museum at £5. [2004]

At the inauguration, which was beautifully organised, The Lutyens Trust was represented by our Chairman, Martin Lutyens, Charles and Issie Lutyens and Michael Barker.