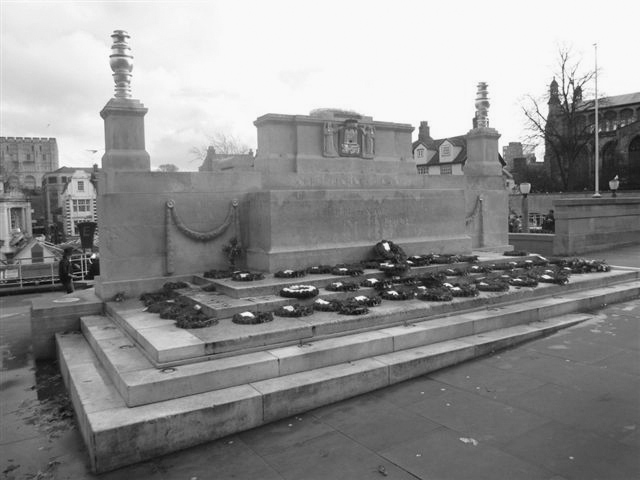 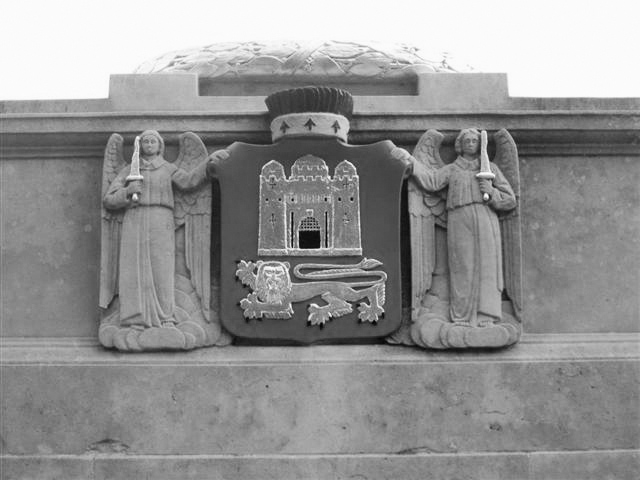 The Great War memorial in Norwich, designed by Edwin Lutyens and inaugurated in 1927, was originally placed at the east end of the mediaeval Guildhall in the Market Square. (See www.georgeplunkett.co.uk/Norwich/monuments and Memorials). The memorial’s history is related in ‘Lutyens and the Great War’ by Tim Skelton and Gerald Gliddon (2008), pointing out that it was the only occasion on which Lutyens incorporated his Great War Stone as an integral part of the memorial and he provided bronze flambeaux destined to blaze on days of commemoration.This piece describes the significant recent changes following its restoration and rededication in November 2011.

In 1938, overlooking the spacious Market Square below, a huge new City Hall was completed to the designs of Charles James and Stephen Rowland Pierce who won the competition (which attracted 143 entries) judged solely by Robert Atkinson who had been commissioned by the City to prepare a layout for a Civic Centre. Inspired by modernist Swedish architecture, and inaugurated by King George VI and Queen Elizabeth, their scheme included a memorial garden landscaped in the same taste, placed opposite the main entrance of the City Hall – which has bronze doors with roundels by James Woodford depicting the history and industries of Norwich and which is flanked by the distinctive modernist lions sculpted by Alfred Hardiman. The garden incorporated Lutyens’s re-sited War Memorial. But, over the years, severe deterioration set in. A new scheme was commissioned which resulted in a complete renovation of the site. Lutyens’s War Memorial was well restored by local contractors R G Carter with cleaning of the stone and gilding the lettering and not only elevated the monument to advantage but also turned it around to face the City Hall, the intervening street enabling a march-past. What is missing from Lutyens’s original scheme are the flag poles topped by wreaths which used to flank the city’s coat of arms.

In 2010 Norwich commissioned the sculptor Paul de Monchaux, originally from Montreal, where he was born in 1934, and known for his Wilfred Owen memorial in Shrewsbury, to create the green bronze abstract sculpture entitled ‘Breath’ (to commemorate all victims of war) which stands immediately behind Lutyens’s War Memorial.

Lutyens at the V&A