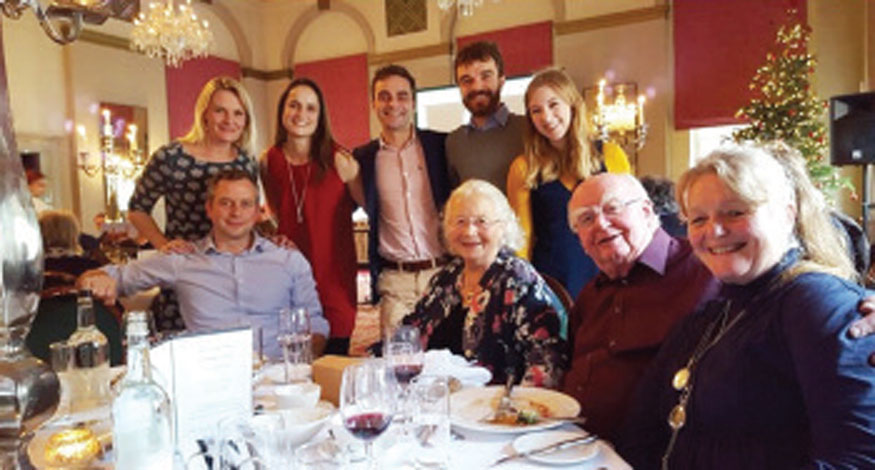 The Christmas lunch was once again held at the Bloomsbury Hotel, Great Russell Street, London, originally designed by Sir Edwin as the headquarters of the YWCA. The Trust was pleased to welcome 65 members to the library for champagne, then for lunch in the stately Queen Mary Hall. Gavin Stamp headlined as guest speaker and enthralled guests with his anecdotes on Lutyens and his relatives, including his great-uncle Englebert, who served as Napoleon’s orderly officer during his exile in Saint Helena.

The lunch featured an audio-visual review of the year’s visits, the traditional pictorial quiz — to recognise Lutyens buildings — with awards and a raffle featuring more great prizes. A special surprise this year was a Lutyens-related Christmas carol. As Christopher Hussey recounts in his biography of Edwin, this originated at Oxford University in 1934, where “he received the honorary degree of Doctor of Law…After a rehearsal of his merits by the Public Orator, a witty verse was sung to the tune of ‘Good King Wenceslas’”. The sweet-voiced Shady Pines, who sang it, had added a final verse in honour of the Trust and its members, who happily joined in the festive singing. Guests were also treated to a slide show by members of Sir Herbert Baker’s family about the upcoming visit to Chilham Castle (with its 1920s alterations by Baker) and the architect’s own home, Owletts. (See Forthcoming Events section for details.)

The lunch, which was much enjoyed by everyone, raised over £400 through the raffle.