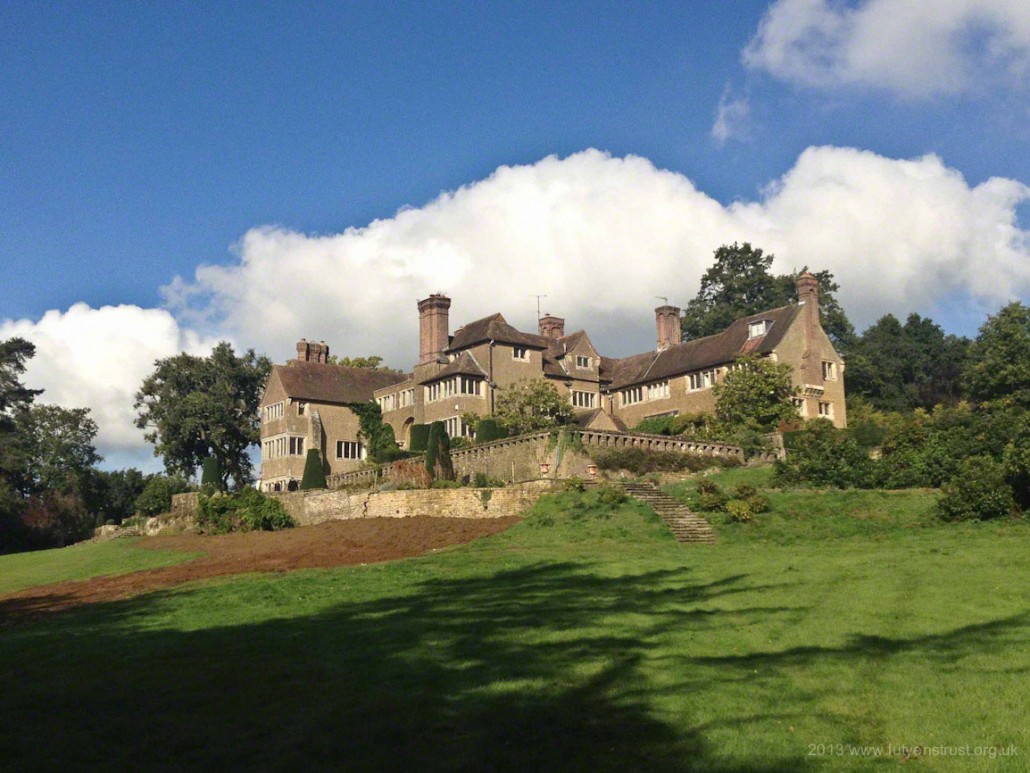 This Spring has witnessed preparatory work affecting a wide selection of Lutyens’s buildings.

Munstead Corner (Munstead Place), 1891—2) was one of his earliest country houses, and its design with a gabled half-timbered first floor over a Bargate stone base, reflects the Old English revival of Shaw and George, rather than the Old Surrey vernacular. Full of quirky details, this house has been insensitively altered, and an enthusiastic new owner wishes to restore missing features, including the recessed loggia facing the garden. The history of the house has been thoroughly researched. Margaret and I enjoyed meeting the owner and his architect, together with the Waverley DC Conservation Officers, to discuss the broad principles of restoration and extension – the latter partly on the footprint of a poorly designed
indoor swimming pool – a later addition.

A few miles away, much-needed restoration has been taking place at Chinthurst Hill, 1893-5, a too little-known house on a dramatic hillside site, commanding views across the valley below. A new owner has undertaken restoration in the garden, the main house, with its baronial hall and limed oak staircase, and is now reworking a previous botched residential conversion of the stables. A major discovery has been a cream-brick floor in excellent condition. This is to be retained below a floating floor, partly exposed beneath a glass panel – a significant reminder of the original function.

The Norwich War Memorial, 1925, will be on the move again. Originally built behind the Guildhall, in 1938 it was moved to terraced memorial gardens below the front façade of the competition-winning City Hall (James and Pierce 1931-38) The concrete undercroft of the gardens requires reconstruction. Due to the level of the changes across the gardens, disabled access to the Memorial has become very difficult. Ramping would change the character of the gardens, which are also listed. It is therefore proposed to raise the Memorial, and turn it to face the portico of City Hall. English Heritage and the Trust have been involved in discussions with the City Council, who have also brought in the Royal British Legion. The principle of moving the Memorial has been agreed, but details of the new setting will be the next phase.

STOP PRESS. I have just received plans of a proposal to return No. 7 St. James’s Square to residential use. Built 1911 for the Farrer Brothers, the Royal Solicitors, this building is reckoned as Lutyens’s finest town house. Further details will be given in my next update.

The ‘Lutyens Trinity’ of twin churches and Institute are the formal centrepiece of Hampstead Garden Suburb, planned overall by Sir Raymond Unwin. The Institute buildings were constructed between 1909-30, and the block facing Central Square was never fully completed. The Henrietta Barnett School for Girls (named in honour of the founder of the Suburb) now occupies the Institute buildings. The interiors require rationalization and low-key extensions are proposed to eliminate the temporary buildings which have cluttered the site for many years. The rear grounds will be re-landscaped to provide an appropriate setting for the imposing pedimented centerpiece. Michael Hopkins Architects are preparing conceptual
designs, and are holding discussions with local residents, HGS Trust, Victorian Society and Lutyens Trust.