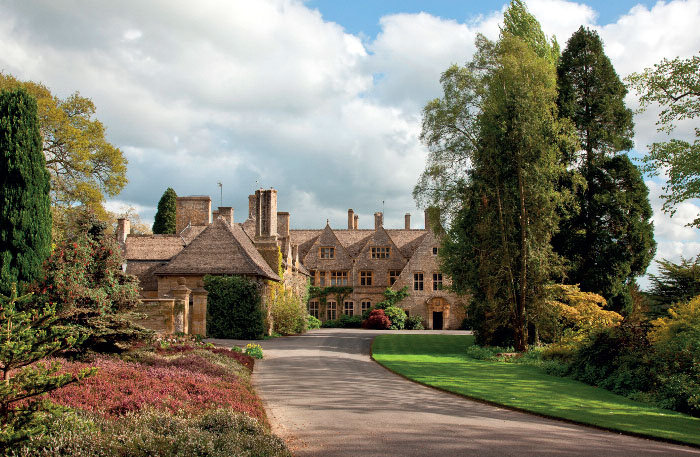 “A magical place where time stands still”, say the American owners of Abbotswood who are now selling after 45 years. Magical indeed when you consider this important Grade II-listed, 22,000sq ft house is set in an immaculate, 774-acre private estate in the heart of the Cotswolds, which includes two lodges, 11 farmhouses and cottages, farm buildings, formal gardens, a walled kitchen garden, parkland, pasture, woodland, lakes and a river.

In 1901 Mark Fenwick, an enthusiastic gardener with money from his family’s mining interests in Northumberland and banking in Newcastle, bought Abbotswood, its centrepiece being an L-plan Cotswold stone house of 1867. Fenwick consulted Lutyens about improvements, receiving as initial advice “Blow it up and start again”. But the dynamite approach was resisted, and the existing house was altered internally and externally in 1901.

Lutyens’s most striking contribution is the main entrance, a classical doorcase framed by a projecting two-and-a-half-storey gable whose eaves drop almost to ground level. The south wing’s west elevation had narrow gables added, and has a central pedimented window overlooking the terrace with lily pond below. Inside, Lutyens created a new hall and balustrade staircase with a suite of formal reception rooms. The gardens are considered among the finest in the Cotswolds: the formal Lutyens gardens to the south west of the house — enclosed by stone walls with fine herbaceous planting, terraced lawns, stone steps and paths — are a delight. To the north and east of the house are gardens with heathers, flowering shrubs and rhododendrons. These are interspersed with mature specimen trees and have views over the valley, river and lake below.

After Fenwick’s death in 1946, the estate was bought by Harry Ferguson, the tractor pioneer, then by the current owners in 1970. Available through Knight Frank and Laws & Fiennes. Excess £27m. Freehold. (Stamp duty at this price would now be £3,153,750.)

The late 19th-century home of Robert and Barbara Webb, situated about half a mile to the north east of the Lutyens family’s own village of Thursley. An original 16th century building was altered and extended by Lutyens in 1896. He extended it again in 1909, adding a long guest and service wing for Lord Stamfordham. The gardens were designed by Gertrude Jekyll. Warren Mere has a romantic link as it witnessed Edwin and Emily’s courtship in 1896, as Jane Ridley has recounted so well: “After dinner that Sunday he proposed a house-breaking expedition with Emily, by moonlight, to Warren Lodge, the house he was building for Bob Webb in the village of Thursley. They broke in through a window and wandered about. Then something happened in the dark, half-built house. A moment of intimacy, a flash of recognition — nothing was said, but it was enough to make Ned, who was sentimental, feel a wave of ronge whenever he passed Warren Lodge in later, harsher times. Next day Ned took Emily to Munstead to meet Bumps”. A year later the couple were married at Knebworth and began their honeymoon at Warren Lodge, which had been kindly lent by the Webbs.

Today the long brick and tile-hung, 9,695-sq ft house is Grade II-listed, and offers smart and comfortable accommodation. It has eight bedrooms, an annex, a four-bed cottage, swimming pool, tennis court and lakes, all set in 51 acres. The interior was redesigned in 2002 by Italian interior designer Enrica Stabile. Available through Hamptons International. Guide price: £6.75m. Freehold.

Hazelhatch is a Grade II-listed, seven-bed, 5,727-sq ft country house standing in 10 acres of Surrey Hills countryside. Designed by Lutyens, it was built in 1897 for the poet and novelist, The Hon Emily Lawless, a friend of Gertrude Jekyll. The elevations are part-colour washed and part-tile hung and there are a leaded-light casement, deep-bay windows, a gabled roofline and stout chimneys. Jekyll planned the woodland garden. There is a sunken garden enclosed by stone walls, enclosing flower borders in the lawn to the south of the house. Beyond the lawns are further areas of light, mixed woodland and a bluebell glade. Available through Savills. Guide price: £3.7m. Freehold. 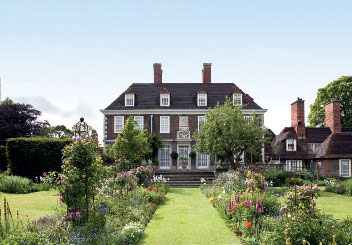 This is perhaps the most outstanding example of Lutyens’s “Wrenaissance” style. It was built in 1911 for brothers Henry and Gaspard Farrer (who also commissioned Lutyens to build their London house at 7 St James’s Square) and best described by ASG Butler in his Lutyens Memorial Volumes as “Sir Edwin’s supreme rendering of the full Georgian idiom, touched with something more than had been achieved by his 18th-century predecessors… This very perfect work establishes itself as a high peak in Sir Edwin’s achievement and it deserves every possible record.”

Now Grade I-listed, this immaculately presented house offers 11,438 sq ft of accommodation, including five reception rooms and eight bedroom suites. There is a secondary four-bed house, three-bed cottage and two-bed coach house, together with formal garden, kitchen garden and meadow, totalling 3.5 acres. The property is set within the ramparts of Sandwich, one of the best-preserved medieval towns in England. Available through Knight Frank. Guide price: £3.5m. Freehold.

Lutyens was appointed by Henrietta Barnett, founder of Hampstead Garden Suburb, to design its central buildings. The houses, of 1910, are Neo-Georgian in appearance, with their grey brick with red-brick dressings, hipped-tile roofs with dormers and tall brick chimneys. On the market for the first time in 44 years, this Grade II-listed, 2,122-sq ft, semi-detached, six-bed family house is arranged over three floors and has a 90-ft garden. The house is situated at the top of Erskine Hill, close to the junction with North Square in a very desirable location in the heart of the Suburb. Available through Godfrey and Barr. Guide price: £2,000,000. Freehold.

Located just up the road from Tigbourne Court, Wood End, is a Grade II-listed, 3,998-sq ft, six-bed house with a surprising and elegant interior. The hall has a panelled and balustraded staircase and the drawing room a barrel-vaulted ceiling; both rooms have wide stone fireplaces. Recorded as “alterations for Lady Stewart”, Lutyens rebuilt the earlier cottage in 1897 with all the hallmarks of his Surrey style. Described by Pevsner as “an attractive house, excellently composed, on a corner, the oversailing upper storey of white plaster on a base of Bargate stone with brick dressings, being anchored by a giant chimney stack into which a miniature porch fits snugly”. The stack is not dissimilar to Goddards’ additions of 1910. The garden, originally by Jekyll, includes a sunken garden with dry-stone walling. Available through de Mallet Morgan. Guide price: £1,275,000. Freehold.

Two Victorian villas near Cromer on the north Norfolk coast were bought by Cyril Flower, 1st Baron Battersea, and his wife, Constance, a Rothschild, who commissioned Lutyens to amalgamate them to create one house for summer use. Building began in 1897 on what is considered by some to be one of his less successful early works, given its combination of awkward existing architecture and Lutyens’s own experimentation, resulting in a busy and eccentric building. But some have admired it. To quote Roderick Gradidge, “By a lesser hand it would seem an ill-considered jumble, but somehow Lutyens has been able to pull the whole façade together and create, if not a coherent, at least a pleasing balance of parts”. The garden façade is a riot of tile hanging, bays, gables, overhangs, windows and corner oriels. The stable clock tower is more romantic, with its horizontal strip of windows under a hipped tile roof, while the immensely long pergola has a roof of sublime simplicity. Most recently used as a Christian Endeavour holiday centre, the property is Grade II*-listed, includes 12 en-suite bedrooms, a guest bungalow and staff annex, and stands in six acres. Available through Knight Frank. Guide price: £1m. Freehold.

At a more modest level, a number of flats are on the market which Lutyens built or had a hand in. These include flats in Aldford House, Park Street, Mayfair (agent: Wetherell: www.wetherell.co.uk); Great Maytham Hall, Rolvenden, Kent (Savills: www.savills.co.uk); Nashdom, Taplow (Chewton Rose: www.chewtonrose.co.uk); Fishers Hill, Hook Heath, Woking (Carson & Co: www.carsons.co.uk), and at Little Tangley, Wonersh Common, Surrey, a house of 1877 given a new staircase and hall by Lutyens in 1899 (Meldrum Salter Edgley: www.mseproperty.co.uk).

Over his 30-year career in property, Richard Page has advised on the marketing and sale of many Lutyens houses, including Deanery Garden, The Salutation and Marshcourt. He is now marketing director for the London & Premier brands of Countrywide plc, which include John D Wood & Co. Email: rpage@countrywide.co.uk

Disclaimer: prices, availability and agent details correct at time of going to press.