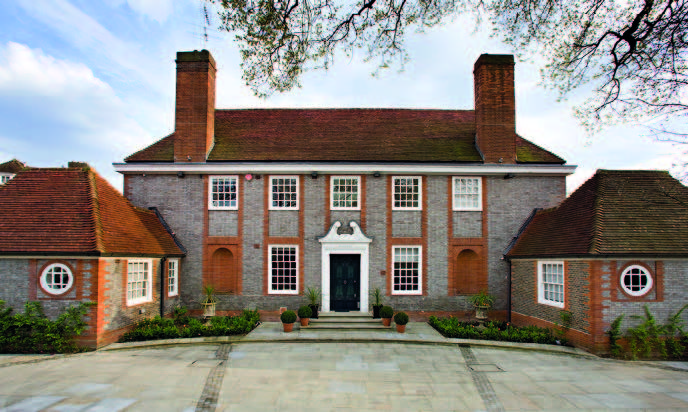 A fascinating house in North London sold in the spring. Reginald McKenna, who was married to Pamela Jekyll, daughter of Herbert Jekyll and niece of Gertrude, became one of Lutyens’s most loyal clients. He commissioned Lutyens to design or rebuild three houses for himself — 36 Smith Square, London (of 1911), Mells Park House, Somerset, which Lutyens rebuilt in 1925, and Halnaker Park, Sussex (1938) as well as significant buildings for Midland Bank of which he was chairman. These comprised its headquarters at No 27 Poultry (of 1924 to 1939, now London hotel and members’ club The Ned); Leadenhall Street (1928); King Street, Manchester designed in 1928 and completed in 1933, and the building at 196 Piccadilly, a homage to Christopher Wren, to the side of St James’s Church (of 1922 to 1923). But what is less well known is that McKenna also commissioned Lutyens to design the facade of a house in Hampstead to give to his son David and new daughter-in-law, Lady Cecilia Keppel, as a wedding present in 1935. Located on Ingram Avenue, the house was a collaboration with John Soutar, who worked on the planning and design of Hampstead Garden Suburb. Lutyens’s Classical elevations are unmistakable with an exterior of grey brick with red brick detailing, a thick cornice under a tiled roof and sash windows. In 2006 the house was completely rebuilt behind the original facade, including a basement extension, the interior having been updated to suit modern family living.

A Revised Expanded Edition of the Book Gardens of The Arts & Crafts Mo...