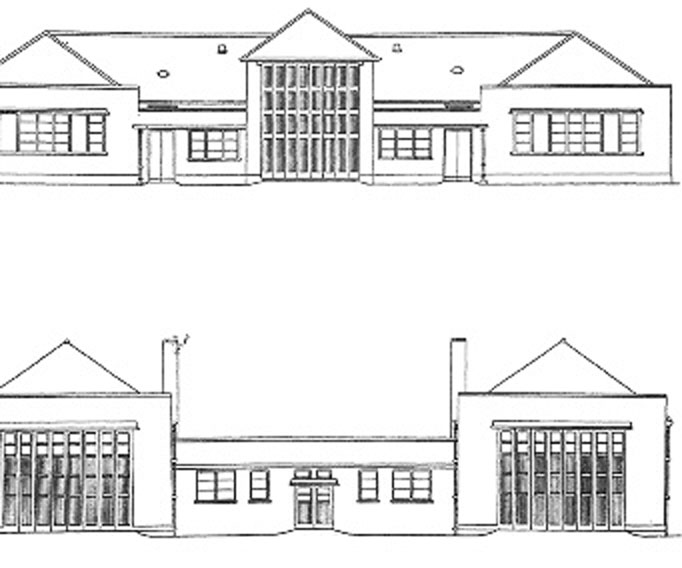 Above: Two technical buildings showing the front elevations of main stores (upper) and workshops (lower). Below: Bomber station planning of 1935 at Feltwell, from Twentieth Century Fortifications in England — Airfield Themes: Studies in the Evolution of Britain’s Military Airfields, 1918-45, volume IX 1. By CS Dobinson. Published by The Council for British Archaeology 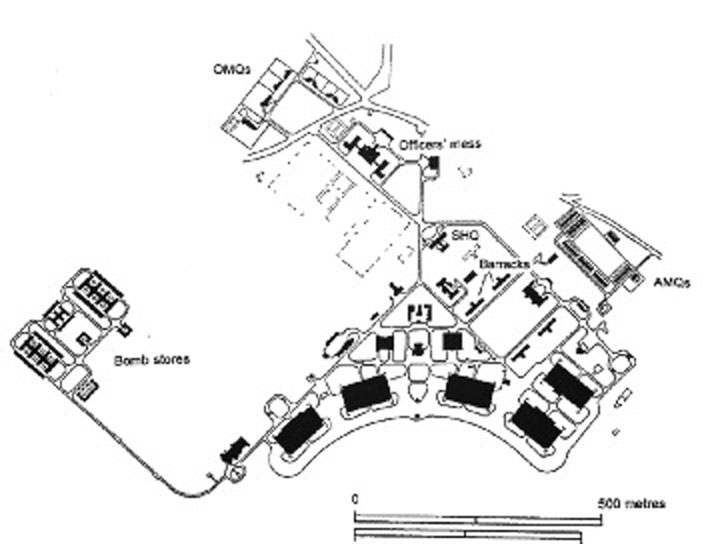 Lutyens and the Expansion of RAF Airfields in the 1930s

Many Lutyens Trust members will remember Dr Stuart Handley, long-term member of The Trust and supporter of its events. Sadly, Stuart fell terminally ill last year and, shortly before he died, he sent me two thick documents — volumes IX 1 and IX 2 of the report by the Council for British Archaeology (CBA), entitled Twentieth Century Fortifications in England — Airfield Themes.

He had been intending to write a paper on Edwin Lutyens’s involvement in the design of RAF aerodromes during the interwar years as there appeared to be a popular belief — which Stuart found to be incorrect — that he was the architect of many 1930s buildings on RAF stations. But Stuart died before it was written, so I hope this article will serve as a small tribute to him and his research into Lutyens’s role in the design of RAF stations during this so-called “expansion period” of the airforce in response to Germany’s accelerating rearmament.

Stuart’s interest in this arose from his having been for many years a member of the academic staff of Cranfield University, a postgraduate institution, long before discovering Lutyens and joining the Trust. While there, he discovered that the staff believed its buildings were designed by Lutyens. So why was it, he asked himself later, that they had these? Stuart found the answer went back to the university’s origins in 1947 when the Government created the College of Aeronautics and both staff and students moved into the recently vacated buildings of Cranfield’s RAF station.

He soon found other RAF buildings that were attributed to Lutyens (as still happens today). “The subject is confused,” he wrote, “because many of the sources are ‘enthusiast’ material and firmly not of the academic tradition. Briefly, Sir Edwin is not the architect of any of the 1930s RAF station buildings. The buildings of the expansion period are the work of Archibald Bulloch FRIBA…appointed Architectural Adviser to the Directorate of Works & Buildings (DWB) in 1934. Lutyens’s involvement was as one of the commissioners of the Royal Fine Art Commission…who acted in a purely advisory role from 1931 until about 1935.”

The 212-page CBA report, compiled from official archives, was one of Stuart’s sources: his notes and extracts from it are the basis of the information that follows, below. Given the scale and impact of planned airfield expansion on the landscape and communities, the then prime minister Ramsay MacDonald farsightedly proposed that the programme “might benefit from review by the Royal Fine Art Commission (RFAC)”. Its commissioners duly started work, and Lutyens laid out “a number of technical dicta” (proportion, angles, materials, and so on) to encourage better design.

Progress was slow while the League of Nations’ World Disarmament Conference of 1932 to 1934 ground on until Germany’s determination to rearm and resulting exit from the conference galvanised the consultations. In October 1934, Bulloch was appointed as Architectural Adviser and in November a “core repertoire of buildings” was developed with a homogenous architectural quality, with one style for hangars and technical buildings and a second, Neo-Georgian style for domestic and administrative structures.

In 1935, a new work phase began and, on 21 February, Lutyens was deputed to deal with the Air Ministry with airfield planning coming under his stewardship. Soon the RFAC reported a “very notable improvement in style and layout…more economical…well-disciplined…[the airfields] thus emphasise their national importance and dignity”. It seems clear from the CBA report that Stuart’s finding is correct: while Lutyens had a considerable influence on the look and layout of the airfields during this critical expansion period, Bulloch and others designed the actual buildings.