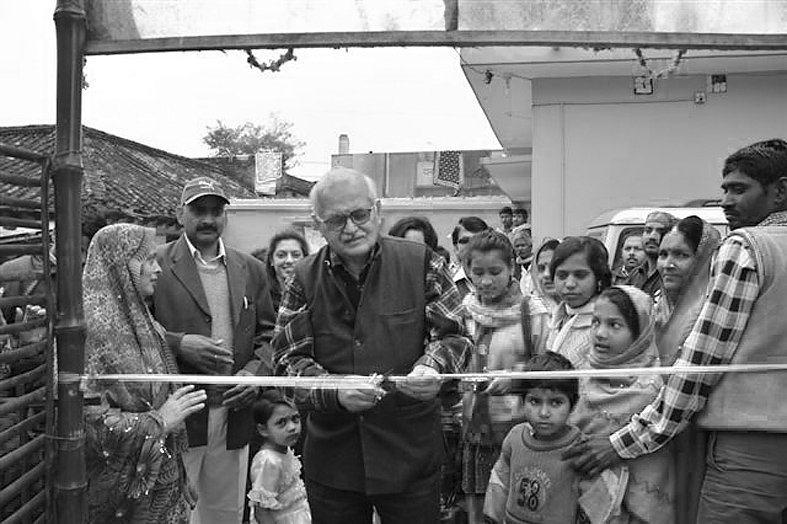 In the village of Hariharpur, district Azamgarh of Uttar Pradesh, India
With expertise provided by three British architects

Background: In May 2009, the Lutyens Trust entered a Memorandum of Understanding with the Indian Trust for Art and Cultural Heritage (INTACH) through which the two organizations, each sharing a common desire to protect and preserve the garden city character and principal buildings of New Delhi, formally agreed to collaborate in a number of initiatives. Principal among these was to work towards the Lutyens Bungalow Zone being declared a World Heritage site by UNESCO.

In fact, collaboration between the two organizations had started much earlier in 2002 when, following a seminar, INTACH had drawn up a Charter for the preservation of Lutyens Delhi. Three prominent citizens were instrumental in this move: Mr S K Misra, then Chairman of INTACH, Professor Mansinh Rana, the recently deceased Patron of The Lutyens Trust (see obituary in the Spring 2013 Newsletter) and the writer and advocate, the late Patwant Singh (see obituary in the Autumn Newsletter of 2009). Progress on the UNESCO initiative has been reported on in a number of recent Newsletters. Mr S K Misra stepped down as Chairman of INTACH in 2010 and in 2011 he founded the Indian Trust for Rural Heritage and Development, an organization focused on rural regeneration through India’s extraordinarily rich rural cultural heritage. Martin Lutyens and Charles Lutyens, currently Chairman and Treasurer respectively of The Lutyens Trust, serve as members of the Advisory Council of ITRHD. Already the foundation has initiated a large number of regeneration projects. The one described below involved three British architects. Mr S K Misra writes:

The school has started functioning with 64 kids, a majority of whom belong to either OBC’s (Other Backward Castes) or Scheduled Castes. We have taken two houses in the village where the school is being run. A local woman has been hired to cook mid day meals for the kids, and it is very gratifying to report that the local community has already donated wheat and rice and will be providing fresh vegetables. Thanks to the efforts of our Advisory Council Member, Archana Capoor, a charitable hospital in Varanasi will be conducting a medical check-up of every child in the school every six months and maintaining a proper record. Nutrients will be supplied to children in need free of cost. School uniform for each child has also been provided by them.

I formally opened the school on 17 February 2013. It was heart-warming to see the bonding amongst the teachers (who are also from different castes), their enthusiasm and excitement.

Another welcome development has been the involvement of the British Council in this project. After visiting rural projects run by other organisations in different parts of the country they decided to support the Hariharpur Primary School in their building plans. The team of three architects had meetings with our Advisory Council Member and architect Shiban Ganju for drawing up the plans for the school building, which is a mud structure with no use of cement and representing authentic vernacular rural architecture. The responsibility for building had been willingly undertaken by the community. The three British architects lived in the village for three and a half months
supervising the building operations. This will be a unique experiment.

The education of one child costs Rs 3000 per year. We are grateful for any contribution.

Post-script: Members of The Lutyens Trust who participated in the 2003 visit to Delhi may remember the dinner hosted by architect Shiban Ganju mentioned in the article above. Members interested in the work of the Indian Trust for Rural Heritage and Development or wishing to support its objectives in any way may visit its website at www.itrhd.com.