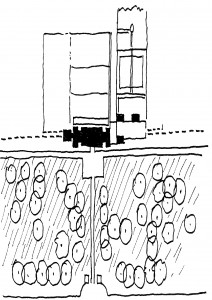 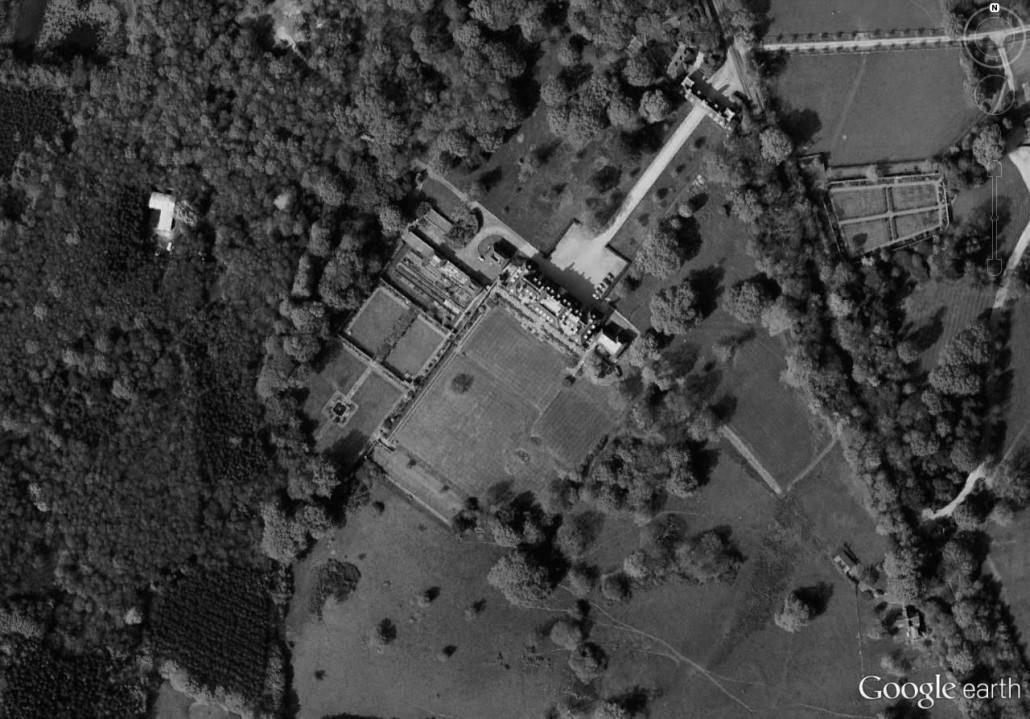 Living here at Great Maytham Hall, I take great pleasure in walking about and studying the underlying geometrical organisations that are the foundations of Lutyens’s great work here. The grandest of these is the overall site masterplan which is focused on some very clear primary principles. The key one is that the main linear block is strung along an east-west line that is very deliberately placed all along a gentle topographical edge, thereby dividing all the land and the garden experiences into two distinct zones. To the north is the flatter well treed informal approach landscape which (except for the central axial entry road through the beautiful gate houses) is informally and naturally laid out “parkland”. To the south on the other side of the house, the land drops away to the distant Rother Valley and so this is a contrasting world of tightly ordered orthogonal gardens laid out as formal geometric stepped terraces, lawns, floral borders and walled gardens.

This very simple arrangement, this duality of external expression, then gives enormous drama to the house itself as it is in essence a long huge screen wall, relatively shallow in depth, a linear building which divides two worlds.

All of the internal planned arrangements of the house respond to this role of the building as a dividing screen; the two opposing and very different views of entrances and level parkland on one side and linear grand elevated south terrace facing down the lawned slopes on the other. All the drama, and it is indeed very theatrically composed, is concentrated in this linear line, a house / screen come wall with two faces to two different worlds.

The other main principle or strategy is in the handling of the massing of the architectural elements that are assembled to form this screen house; these elements in plan take subtle, shallow steps, forwards and backwards and more dramatically in silhouette rise and fall along the ridge. All is composed as dis-aggregated yet one, a kind of linear village, a strung out line of elements. In composition the house is almost like 5 houses, 5 pieces in one. The central “house” ingeniously formed on the foundations and lower main walls of an earlier house, dominates in size and position; it is higher and grander and has its own east-west roof and end chimney sets framing and defining it. Then two pavilions at the extreme east and west of the long screen house, book-end the whole composition, but unlike the central long east-west form, they have their identity separated out not by framing chimneys but by a single heroic central chimney improbably rising from the apex of the ridge of the short north-south ridged roof. These elements rise and fall and are always softened by hipped gable ends. Between these extreme book-end elements are two short infill “houses” with exquisite accentuated central doorways; they are infill elements which are like little dolls house set pieces. One particularly cleverly handled piece is the levels of the doorways which you have to look at twice to realise that one is higher than the other due to the slight east-west slope – you need to have this second look to see the differences and apparent samenesses.

The whole linear assembly has a monumental presence, self-conscious and maybe a bit pretentious, but this is all deliberately designed to make the house appear very much bigger than it actually is. This is a very different Lutyens to the modesty of the English Arts and Crafts houses of earlier times with their subtleties and informalities. Here we have all the geometric rigour of Palladian villas and the theatrical grandeur (albeit on a much smaller scale) of Seaton Delaval or a Blenheim.

These are the two big moves but there are so many skilled crafted smaller ones, some of which, only by living here and walking about and immersing oneself in it, can slowly reveal themselves. The windows for example range in size and proportions to adjust to different façades, different wall thicknesses and whether they are in the old or new building elements, yet all are cleverly tuned and adjusted to look more or less the same. This is all very deliberate and knowing, the eye is frequently deceived by a skilled magician of shape and form who knows just how far to go to deceive, yet to reassure. Then there are the many smaller rhythms of buff and red brick, hipped and rounded
dormers, brick aprons and brick recesses, subtly advancing and retreating, and variety of exaggerated chimney columns that rise and fall as though bobbing on large waves at sea.