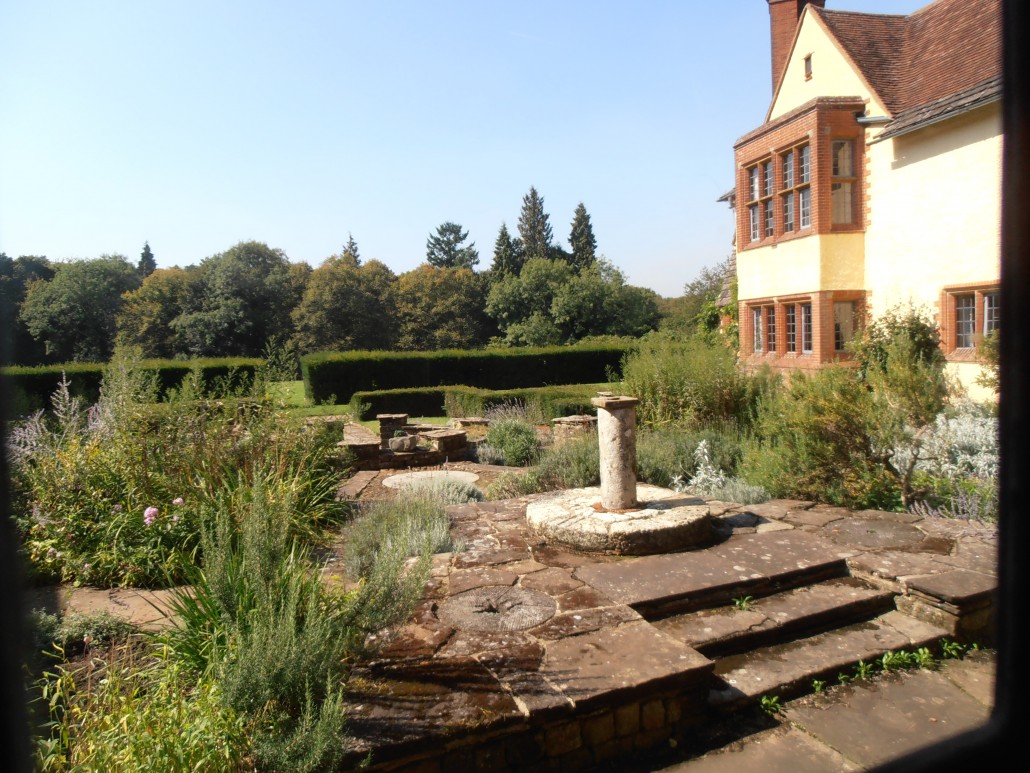 The weather this year was very stormy and changeable, one day it was so cold logs had to be procured for a fire while on another day deckchairs were needed to sunbathe in the garden. As usual the comings and goings at Goddards were ably orchestrated by Christine Barnett who welcomed three SPAB students on their annual visit. The annual meeting at Goddards of the Trustees and members of the Events Committee and Photographic Committee was held on Saturday 11th June. An item of special interest which was reported was the progress being made by the Photographic Committee chaired by Andrew Barnett in establishing the photographic archive on line. On Tuesday 14th June the Arts & Crafts Movement in Surrey held their study day on Arts & Crafts houses in the village of Ewhurst and in the afternoon visited Belmont School, originally known as ‘Feldemore’ designed 1897-1880 by George Redmayne to plans of Alfred Waterhouse for Edwin Waterhouse 1841 – 1917 (a founder partner of Price Waterhouse). On Wednesday 15th June the Lutyens Trust held their study day (see report below) and on Thursday 16th June Dr Mervyn Miller, Architectural Adviser and Trustee, in his role asRenter Warden of The Worshipful Company of Chartered Architects, welcomed a party of 30 from the Company to Goddards, led by the Master, Edward King. After a briefing talk and a tour of the house and garden, Martin Lutyens joined the party for lunch, after which the group moved on to Munstead Wood, for a tour of Gertrude Jekyll’s home and garden, by kind permission of Lady Clark. The Company made donations to The Lutyens Trust and to Godalming Children’s Hospice.

The day started with an illustrated talk by Dr Nigel Barker on the smaller houses and cottages of the Arts and Crafts period. I felt a certain guilty pleasure in listening to this. The Trust had originally invited me to give the talk – an invitation I declined without hesitation, suggesting that they ask Nigel instead. This proved to be a clear case of the Trust being hugely better served by its second choice.

Nigel examined both the architectural significance of the buildings and the relevance of their plan form to the real needs of their occupants.

Lutyens is known for ceremonially generous and costly circulation space serving, sometimes, relatively few reception rooms. (Often, too, he made interesting play of service wings in creating his illusion of greater compositional substance.) He exploited his own skill together with his clients’ money to create all the grandeur of great country houses even if on a smaller scale.

Nigel’s concern, though, was with the humbler architects and their slightly less affluent clients. They, seeing grand houses in the pages of Country Life or the architectural press, were doubtless inspired. The fact is that the format of such houses, with full complement of hall, drawing room, morning room, dining room, library and whatever other chambers were thought essential to aristocratic life, simply would not work when reduced below a critical size. That did not necessarily deter architects and clients from trying. The results might look appropriately artisticor at least promote the status of the occupants – but at the cost of congested circulation and a cramped cellular lifestyle.

More thoughtful architects recognized this problem. M.H. Baillie Scott was an influential advocate of a more functional plan and considers, in his 1906 book Houses and Gardens: Arts and Crafts Interiors, the merits of more flexible and open planning. Variously described as living-room, dining hall, or house space – such less confined volumes, skillfully designed, could once again contribute both theatrical grandeur and homely practicality to the smaller house.

Nigel compared houses of both the cellular and the open plan approach using illustrations mostly from Surrey. Whilst, externally, many had the picturesque charm we admire in the best Surrey style houses, only a few had the clear edge in practical planning. However, I must confess that my own favourites included Lilyfields by “Bungalow” Briggs and the Bailiff’s Cottage at Westcott by Maurice Adams, both of which owe more to ostentation than to efficiency.

Afterwards, a selection of photos by Andrew Barnett of early Lutyens works was shown. These were just part of the growing collection of images taken by Trust Friends. I would very much like to see more such presentations, which allow the audience to contribute comments and anecdotes about the buildings.

The afternoon visit to Lutyens’ Lascombe of 1894, a house largely ignored by the literature, was especially interesting seen in the light of Nigel’s talk. Members were generously shown the house by Mr. Kenneth Stent, the owner.

It is in the Surrey vernacular style seasoned with a hint of classical. Even building a house of modest size (by the standards of its day) Lutyens knew how to make first impressions count. The visitor is presented with a striking composition with the entrance porch placed at an angle beneath a cascade of gables, jetties and chimney stack.

Within, the house is just large enough to allow three good reception rooms. Lutyenssaw no need to resort to open planning; instead a comfortably sized entrance hall provides perfectly convenient circulation. Into this, though, spills the real gem of the house – the staircase. This rises in easy stages by an intriguingly complex series of short flights and landings. Its balustrades form a seductive sequence of galleries that would make a great set for Romeo and Juliet. Even in a small house, Lutyens knew how to waste a little space to highly
rewarding theatrical effect.