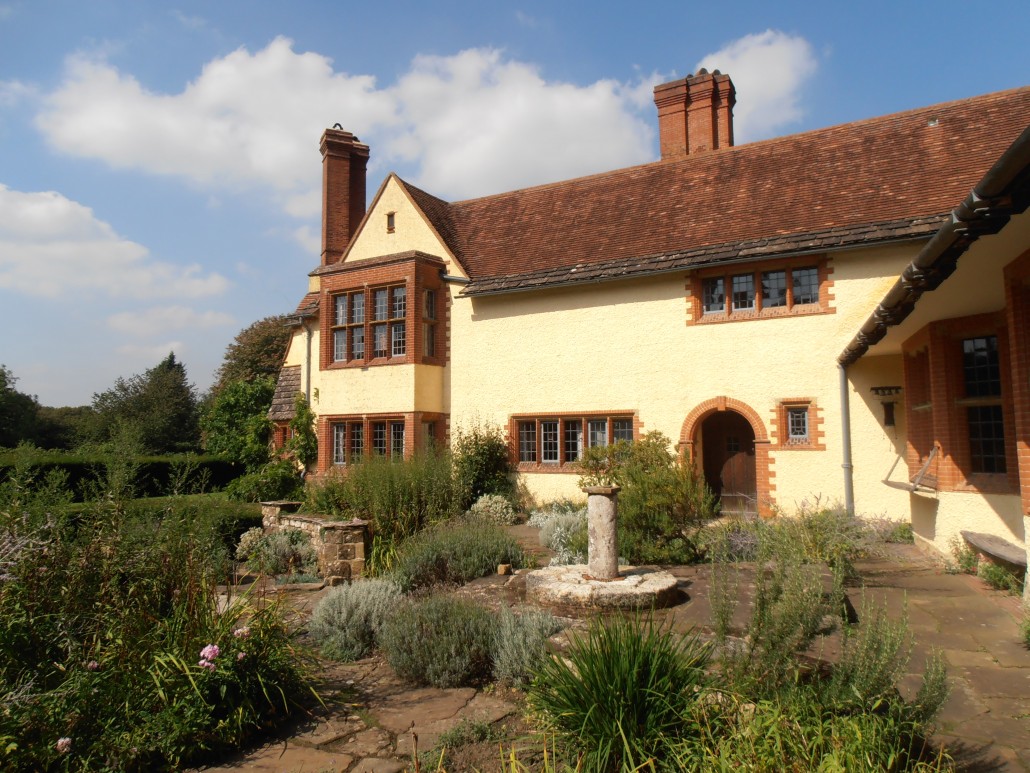 In Surrey with Muthesius

Herman Muthesius’s Das Englische Haus was published in 1904-5, but did not find its way into English translation until 1979 – and then only in a ruthlessly abridged version. For the complete work, English readers had to wait until 2007 but the excellent quality of this boxed-set production of The English House is fair exchange for both our patience and the price.

Janet Allen’s talk at Goddards explained how an unlikely German architect-turneddiplomat seized his chance to embark on a monumental study of English domestic architecture at the Kaiser’s expense. Janet guided us through the results of his work, describing its structure and purpose, making its three large volumes far less forbidding – indeed quite enticing.

Though Muthesius pursued his task with relentless scientific rigour and Germanic attention to minute detail, the book nevertheless has an immediate visual appeal. Lavishly illustrated, even by today’s standards, the book must have been a hugely expensive venture in 1904. Photos, line drawings and plans on nearly every page invite exploration of a text describing not solely the domestic architecture, but almost every aspect of the lifestyle of the privileged classes, and those who served them, before the Great War.

Leaving Goddards, designed by one Muthesius star, our afternoon visits took us to houses by two more of his favourites – Voysey and Norman Shaw.

Voysey’s Norney was built for a clergyman blessed with a comfortable inheritance. The posh end of the house is ample but not huge, and departs from symmetry just enough to make it a lively composition. From this, the service wing then rambles pleasantly northwards into shrubbery, leaving the house to enjoy garden aspects to the south and west.

Mr and Mrs Russell Clapshaw, the owners, led an intriguing and unconventional tour of the building – exploring Russell Clapshaw’s theory of an intellectual game of hide and seek that Voysey had embodied in the house. I still can’t help feeling, though, that it was pure mistake that set a timber purlin flying across the eye-line between the hall gallery and the round window above the front door. The resulting loss of a dramatically framed view down the winding drive surely wasn’t a deliberate intent to tantalize.

As always, on these trips, we were shepherded away too soon – Richard Norman Shaw awaited. But first a pause to dip into Muthesius for his thoughts on the two architects: Voysey’s “means of expression are of the simplest so that there is always an air of primitivism about his houses. This lends them their charm… Yet Voysey’s total abandonment of historical tradition does rob his houses too of that firmly established conviction that we admire so much in the houses of the Norman Shaw group.” Whereas Shaw, “in his country houses, … was unable to break away from the romantic image that the old English manor-houses hold for modern man…”

If you are commissioning a house, you have to make your choice and pay your money. As mere visitors we are luckier, we can enjoy both – so on to Pierrepont.

This is quite a different game, with an abundance of fake timber-framing above a stone base. Just the thing to give new money an air of established respectability. To my eye, Shaw’s vernacular buildings never quite, in reality, have the magic their perspectives promise. There is perhaps, in their execution, an industrial precision of material and workmanship uncharacteristic of true vernacular.

Nonetheless they always display a high quality, reflective of the industrial wealth that funded many of them – and Pierrepont, built as the home of brewing magnate Richard Henry Combe, impresses by sheer power of scale. Each monumental chimney must have consumed enough bricks to front a couple of terraced houses – and the numerous chimneys here could together clad a short street. Within, the vast hall is nothing less than Hollywood baronial and, opening directly from the main corridor, would surely have been intended to amaze Mr Combe’s every visitor.

The stables, of a decade later, are by a Petersfield architect, HT Keates. Combe seems to have got by, in the meantime, with stables surviving from an earlier Pierrepont House. Judging from old OS maps, the Keates stables may have been simply a remodelling of these – but a very grand remodelling. Muthesius observes that: “A properly appointed stable-yard always has a clock that is visible from a distance. It is placed above the entrance, which is usually surmounted by a towerlike structure”. At the Pierrepont stables we have the extra magnificence of both an elaborate gatehouse and a separate clock turret. To the late 19th century gentleman of quality, his horses must surely have carried more status than the Aston Martins and Porsches of today’s Premier League footballer in Alderley Edge.

Pierrepont became a boarding school after the Second World War, but is now a Christian mission centre. It is sad that the plaster-panelled ceiling of the drawing room has been censored by the present occupants. Supposed “sexual images” in alternate panels, which evidently did not unduly distress schoolboys, are now lumpily overlaid with lining paper. That apart, if the limited resources of institutional owners have not permitted major restoration – careful economy has avoided destruction of essential features on over-funded whim. The present users seem to be immensely proud of the house and, in the relentless battle to maintain the fabric, endeavour to do things well – often using the skills and labour of their own members.

Not every country house in Surrey has yet succumbed to luxury refit by today’s instant millionaires. Both Pierrepont and Norney demonstrate that maintenance on a careful budget, though daunting, can sometimes be less of a compromise to the essence of a great house.