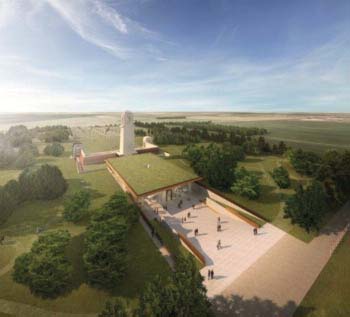 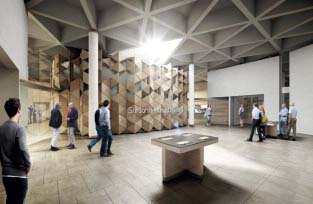 Go-Ahead for Visitor Centre at Villers-Bretonneux

The Australian Government has launched its ambitious proposal for a new Visitor Centre here. Our suggestion — for it to be sited modestly and logically by the new car park, near the entrance and outside the periphery of the Memorial and Cemetery — has not been accepted. Instead, the Centre is now to be placed behind Lutyens’s Memorial — the only other virtually hidden site available for a scheme on such a large scale.

It will be called the Sir John Monash Centre in honour of the much revered and decorated commander of the Australian Corps. The centre will be half-buried and will have a turf roof, which is a blessing, but there are concerns that its entrance will compromise aspects of the Memorial and about intrusive signage and tree replacement.

These issues were raised by Martin Lutyens, Gavin Stamp and Tim Skelton at a recent meeting in London with the Director and staff members of the Office of Australian War Graves and the project’s architects. They also pressed for the Visitor Centre to have a section devoted to the contribution of Lutyens to the building of the Memorial; and that the Centre be sited a little further away from the Memorial’s rear wall. It was also suggested that the project architects should consult Peter Inskip, Honorary Artistic Adviser to the Commonwealth War Graves Commission (CWGC) and Lutyens expert, particularly in relation to the intended alteration to the pavilions, which is needed to allow access to the Centre.

Moreover, it was proposed that CWGC’s ugly hut be moved. The architects confirmed that this would take place and pointed out a new, less conspicuous site which had been found for it.

Proposed Extension to the Visitor Centre at Thiepval