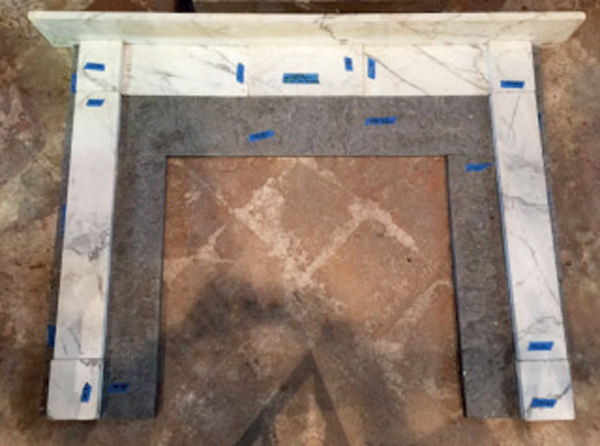 Towards the end of last year, I was approached by a salvage dealer in the Washington DC area looking to sell a collection of eight Lutyens mantelpieces and several firebacks that he claimed came from the British Embassy in the city.

Ostensibly, the mantels bear all the hallmarks of a typical Lutyens design. They are made of a mix of marbles: while some are in a single colour, others have contrasting inserts. Their design is relatively simple as though intended for less formal spaces rather than grand public areas but they have a pleasing geometry and several have nice carved details. The firebacks are without question by Lutyens as they have the royal insignia of George V cast into them. They are virtually interchangeable with many firebacks in Rashtrapati Bhavan.

The larger issue is not whether it was Lutyens who designed these objects, but how they came to be in the hands of a dealer, and to what extent — and when — the embassy staff indulged in this apparent bout of institutional looting of a hugely important building.

Insofar as the Trust has been able to play detective and, on the basis of what the dealer has told me, it appears that the mantels and firebacks have been in storage for a very long time. It seems most likely therefore that they were removed around the time when the new chancery extension was built. (Designed by architect Eric Bedford and constructed between 1955 and 1961, this is an affront to the eyes of many who love Lutyens.) When this was built, the offices which had been in the original Lutyens building were moved to the new chancery. Parts of the old offices were converted to staff apartments and presumably the fireplaces were deemed surplus to requirements.

While it is not too difficult to see that this might have happened when Lutyens’s reputation hit its postwar nadir, it remains harder to conceive that embassy staff today could be so cavalier with part of our national heritage, particularly when such few Lutyens designs exist on American soil. That said, with hindsight, it is possible to be charitable and speculate that those charged with clearing out the storage at the time were unaware of what they were dealing with.

Nevertheless, the deed has been done. Fortunately, the dealer is a lifelong Lutyens fan and is very appreciative and understanding of what he now holds. The collection is available for a sum in the region of $40,000, and he would prefer to keep the pieces together in any sale. It is likely that they will be bought by an American designer or architect who will then distribute them among his or her clients. However, any interested party can get in touch with me about them as it is in the interests of anyone who loves Lutyens’s work to ensure they find the best possible home.

My Role in Assisting Historic England with the Upgrading of Lutyens Memoria...