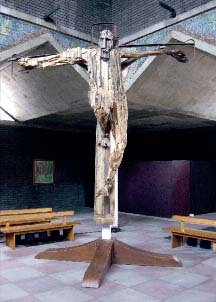 A 15-ft high, wood and steel sculpture of a crucifixion by Charles Lutyens, first seen in his exhibition of work, Being in the World, at St Paul’s Church, Bow Common, London has recently been installed in Liverpool’s Anglican Cathedral.

Called “Outraged Christ”, this was a spontaneous work — it wasn’t commissioned — created intermittently over a number of years. With the intent of having an encounter with this ‘Man’ and with the reality of the event taking place, the sculpture was driven by such questions as “Who was this Man?”, “What did He look like?” and “Why was this crucifixion remembered for 2,000 years over and above the countless other crucifixions that have taken place?” It is a moving and powerful image which, in its making, disclosed itself to Charles as an “Outraged Christ”. Deeply engaged with this extraordinary event, Charles thought, “If the resurrection happened, then was it not already inherent in the crucifixion?”

The Grade II-listed St Paul’s Church, designed by architects Robert Maguire and Keith Murray and consecrated in 1964, was recently voted “Best modern church in Great Britain”. It also contains the stunning 800-sq ft mosaic mural, also by Charles, called “Angels of the Heavenly Host”, the largest single artist-created mosaic mural in the British Isles. “Asked by the architects to provide a design for this work I said, at the time, ‘Sorry, it is not possible for me to design an angel, angels appear’,” recalls Charles. “But, incredibly, the architects then said, ‘All right, appear us an angel’.” Charles recently gave a talk, in situ, for English Heritage about the mural and its making.
www.charleslutyens.co.uk