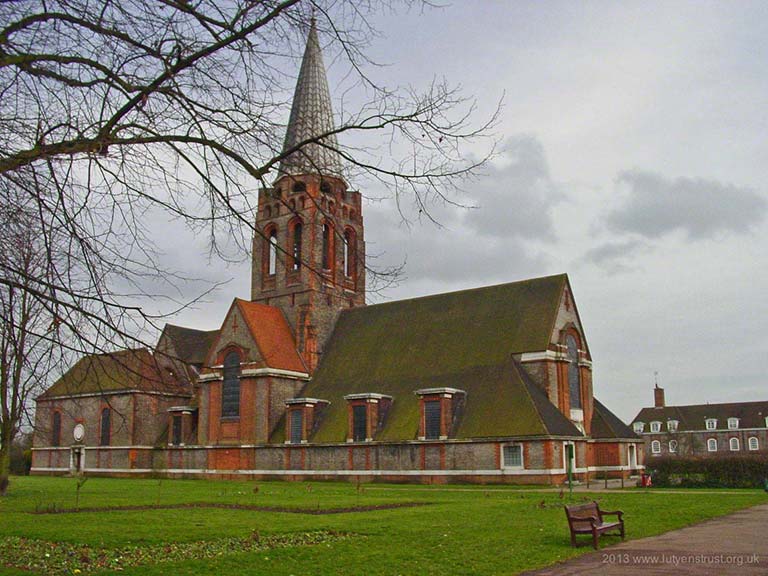 St Judes on the Hill at Hampstead Garden Suburb

THE GARDEN IN THE CITY; are Garden Cities and Suburbs sustainable communities?

This Conference was organised by the Town and Country Planning Association in conjunction with the HGS Centenary Committee.

Centenaries are appropriate occasions for taking stock. It was on 2 May 1907 that Henrietta Barnet dug the turf for the foundations of the first cottages to be built, Nos. 140 and 142 Hampstead Way. The previous day the 243 acres for the first phase had been conveyed to the Hampstead Garden Suburb Trust by Eton College. The scene was set for development of what, 50 years later, Sir Nikolaus Pevsner called ‘the most nearly perfect example of that unique English invention and speciality, the Garden Suburb’. In 1905, Raymond Unwin had prepared the preliminary layout, honed and refined over the previous two years, and Edwin Lutyens, formally appointed with Unwin in 1906, was striving to design Central Square with its twin churches, St. Jude’s and The Free Church, framing The Institute (now part of the Henrietta Barnett School), where, appropriately, the second day of the Conference was held, under the enthusiastic patronage of H.R.H. The Duke of Gloucester, himself an architect.

The scene was set on the first day by Sir Peter Hall, President of the TCPA, proclaiming that the suburb, generally, had been by-passed by the focus on urban regeneration over the past decade, yet it continued to provide stable communities, and to fulfil housing aspiration. The Garden City movement had set development standards to the 20th century, which had endured. Philip Davies, of the London Region of English Heritage agreed that the conservation of mature suburbs was imperative, but should be accompanied by the positive management of new development in context. Ben Cochan and Kim Slowe, a developer, addressed the challenge of change and the implications of the zero carbon agenda for new communities.

In the afternoon, I gave an overview of Hampstead Garden Suburb, from inception to the present, addressing key issues, such as traffic and escalating house prices, against Mrs. Barnett’s key objective of a suburb for all classes. Paradoxically, the care with which its physical environment had been managed (with the exception of domination by cars), under the HGS Trust Scheme of Management and Barnet London Borough Conservation Area policy, had increased the price of properties up to 20% higher than comparables outside the Suburb. There was also a growing problem with pressure for demolition and redevelopment with more dominant ‘superhouses’. Consequently HGS had become a preserve of the super rich, and the remaining 350 units of social housing (about 6%) needed to be jealously guarded. Next day, Jon Finney (Barnet LB Conservation Officer), David Davidson (HGS Trust Architectural Adviser) and Jane Blackburn (HGS Trust Manager) all enlarged upon the operational difficulties of retaining the vision in the face of mounting pressure for change, and legal challenge.

Comparison with others’ experience is always helpful. Christine Garnaut recounted the experience of Charles Reade, a New Zealander, who had worked in Unwin’s Hampstead Office, and had been commended by Ebenezer Howard, founder of the Garden City movement, to return to the Antipodes to introduce garden cities and town planning. Reade had planned Colonel Light Gardens, Adelaide, one of the first true garden suburbs in Australia, which had lately gained protection under national heritage legislation. One of the true successors to HGS
was Welwyn Garden City, established by Howard in 1920, where the growing preference for formal layouts was reflected in the central axis along Parkway to Campus West. Tracy Harvey, Conservation Officer, gave a presentation on the second day, on the local authority role (which unlike HGS includes the ground landlord ‘scheme of management’). Over the past two years, the TCPA has been conducting a research project on Garden City Settlements and their future (upon which I have been an adviser) and David Waterhouse summarised this on the first day. It complemented the keynote address at the opening of the second day, ‘The Garden in the City’, in which TCPA Director, Gideon Amos returned to the challenge of integrating sustainability concepts, sensitive design, and inclusive communities, which would endure as had the original Garden city models.

On the second afternoon, there were workshops and walks around HGS. After giving an address of welcome to our Royal visitor, I accompanied him into the two Lutyens churches, with which he was notably impressed. He also approved the installation of a commemorative stone, to be installed on the walls of The Institute, alongside those unveiled by Queen Mary and Princess Margaret, the latter on the fiftieth anniversary of HGS. The Conference had proved its worth in many ways, and emphasised the need for continued vigilance to conserve the spirit and substance of the place during its second century, which will certainly be no easier than during its first.