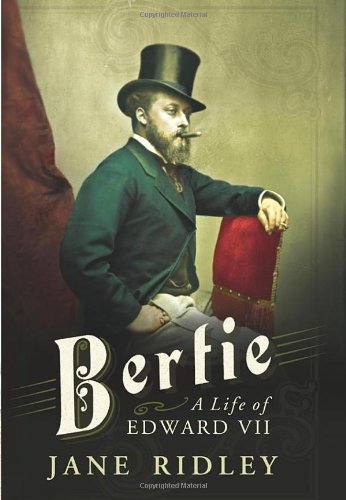 ‘Bertie’ A Life of Edward VII

Following her much acclaimed biography of her great-grandfather Edwin Lutyens and his wife, Lady Emily, Jane Ridley has turned her attention to King Edward VII, a pivotal figure in the society in which the young Lutyens launched his career. The King died in 1910 when Lutyens was forty one.

Edward VII, better known as ‘Bertie’ was a very public person but a surprisingly private man and all his life chose to play his cards very close. In his will he decreed all his private papers should be destroyed, as were Queen Alexandra’s. Queen Victoria made her daughter, Princess Beatrice, the literary executor of her private papers; there were bonfires at Windsor! Also it has transpired that contemporary politicians, Asquith and Balfour among them, and court officials had their own agendas and sought to diminish Bertie’s contribution to the government of the country. This has presented problems for biographers. Fortunately caches of papers have survived in other archives and Jane Ridley has written an account of a Prince, who despite his faults had many great gifts and became an exemplary monarch.

This is not a conventional biography. Professor Ridley approached her subject from the point of view of the women in his life, Queen Victoria, critical and unforgiving, his wife, Princess Alexandra of Denmark, loving and loyal and his women friends. With regard to the latter, it is perverse that the precautions he took to destroy his correspondence did nothing to prevent subsequent accounts of his philandering, which the author says was no worse than many of his contemporaries.

As a child he was subjected to a terrible educational regime devised by his father, Prince Albert, which he failed miserably. Queen Victoria could only see faults and blamed him for his father’s early death and determined on excluding him from any part in official political government. On his marriage to Alexandra they settled at Sandringham and Marlborough House; the glamorous young Prince and Princess of Wales became the focus of society and the public face of the monarchy. Aristocrats, politicians and the new rich vied to become part of the Marlborough House set and exclusion was social death. It was the institution of the ‘country house party’ lasting four or five days which provided the setting. Architecture and interior decoration were the backdrop and many a fortune was spent on improving houses in which to entertain the Prince. The burnt out shell of still magnificent Witley Park (English Heritage), the home of the fabulously wealthy Earl of Dudley was visited many times by Bertie. An enchanting collection of watercolours document the visit of the Prince and his family to Cragside (National Trust) in 1884; the industrialist, Lord Armstrong built a new drawing room for the occasion. Related to most of the ruling houses of Europe and with a wide acquaintance which included businessmen, philanthropists and Jewish bankers, the Prince of Wales informed himself on all aspects of political and social life.

Lutyens’s marriage in 1897 to Lady Emily Lytton introduced him to this world. His mother in law, Lady Edith Lytton was a Lady in Waiting to both Queen Victoria and subsequently Queen Alexandra. He was already working on an extension to the Ferry Inn at Roseneath for the artistic daughter of the Queen, Princess Louise, Duchess of Argyll. Other commissions followed from members of society such as the Hon. Alfred Lyttleton (Grey Walls 1900, Wittersham House 1907). For the King’s friend, Mrs Willie James who lived at West Dean in Sussex he built in 1901 a summer retreat called Monkton on the South Downs. A rising politician whose name appears is that of Reginald McKenna who was a Liberal minister in 1905 and became a loyal client of Lutyens. At Sandringham Bertie lavished money and attention creating a ‘perfect’ country estate, which can still be admired today. It did for bleak Norfolk what Balmoral had done for Scotland. Cromer and Overstrand became fashionable resorts. There Lutyens built Overstrand Hall for Lord Hillingdon and The Pleasaunce for Lord Battersea.

In August 1902 Lutyens watched the King’s coronation procession from Mrs. Wentworth Beaumont’s house in Piccadilly and wrote a letter to Lady Emily in which he was critical of the pageantry. Bertie had realised that monarchy has to have public expression and as King Edward VII he attached great importance to ceremonial. Buckingham Palace was opened up after nearly forty years of neglect and renovated. The King was deeply interested in foreign affairs and he brought all his skills as a linguist (he spoke French and German fluently) and a diplomat into play to help secure the entente cordiale to try and prevent a European war.

With the forward march of democracy the role of the monarch had evolved; unlike his mother Edward VII stood above party and laid the foundations of a constitutional monarchy. The King died aged sixty nine, worn out by his active life and illness related to smoking too many cigars! He was much loved by his family and subjects. Tragically the world he had helped to create and hoped to preserve came crashing down in 1914. For members of the Lutyens Trust who read Jane Ridley’s biography of Lutyens this biography of Edward VII offers fresh insights into that era.