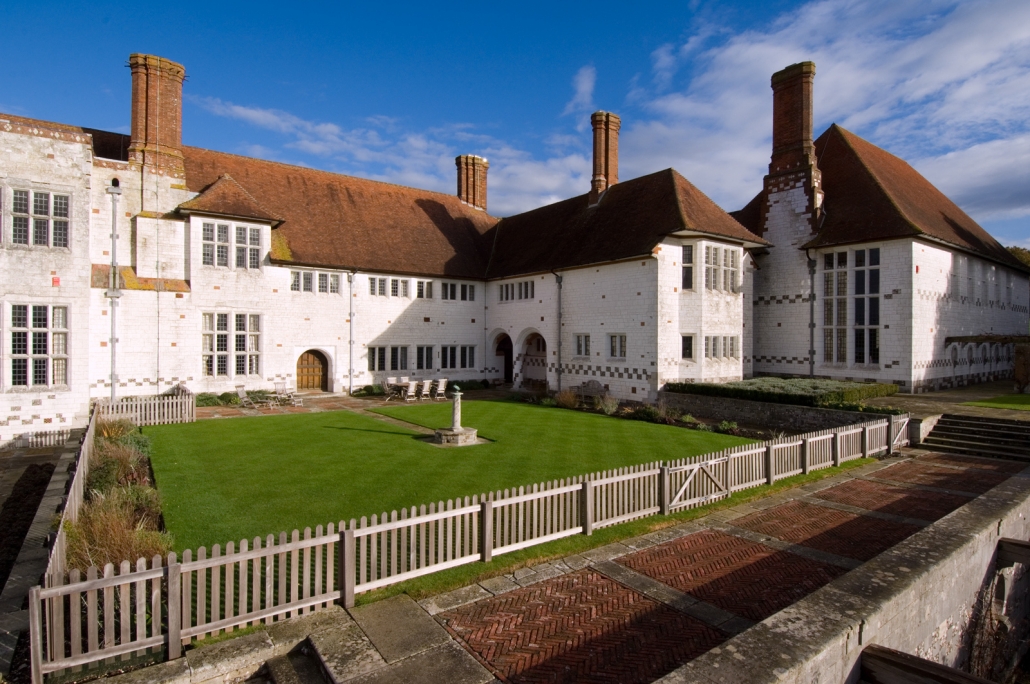 For those with Sat-Navs, used postcode SO20 6JB for the House. Parking is available at National Trust Lion’s Den Car Park, Cow Drove Hill Road, Stockbridge. For more details on the car park visit https://www.nationaltrust.org.uk/mottisfont/trails/stockbridge-common-marsh-wildlife-walk#How%20to%20get%20here

This is approx. 1.4 miles from Marsh Court. Unfortunately, it will not be possible to park on site.

From London, trains can be boarded at Waterloo to Winchester. Buses then run from City Road (stop Rb) towards Broughton. Alight at North Houghton Farm. Marsh Court is a further 2.3 miles. Alternatively please use a taxi from Winchester Station Taxi Rank.

A Visit to Marsh Court

By kind permission of the owners will be visiting Marsh Court House & Gardens.

Marsh Court stands on a chalk outcrop overlooking the Test Valley on the edge of Stockbridge and was built between 1901 and 1904 for Lutyens’ friend Herbert Johnson an ‘adventurer, stockjobber and sportsman’, who made and lost a fortune in the City, before making another. The House was completed in 1904, but Lutyens came back several times over the years to make alterations and improvements installing more bathrooms and adding, in 1924/26, the Great Hall, or ballroom to the south-east corner of the house.

Previously, clunch had been used inside churches and for cottages, but never as the building material for a 27,000sq ft country house, where the whiteness of the walls is enhanced by the contrast with the tall, red brick chimneys and long, unbroken sweeps of pitched tile roof. The current vendors will no doubt be relieved to hear that Country Life’s architectural editor, Jeremy Musson, who visited Marsh Court last year, was favourably impressed by the way in which Lutyens’s all white theme has been expanded throughout the interior to create an exciting, 21st-century country house against the background of an Edwardian Arcadia.

The gardens at Marsh Court described in Country Life (March 19, 1932) as ‘one of the most fully worked out garden schemes with which the names of Lutyens and Gertrude Jekyll are associated’ were designed in a series of terraces to take advantage of the natural fall of the ground. Formal elements, such as the ‘rendezvous lawn’, the Grade II*-listed sunken garden and the pergola with its adjacent stone pools, are offset by large sweeping areas of lawn.

Peter Inskip + Jenkins Architects, performed extensive documentary research summarizing the historical evolution of the estate design as a basis of plans for their superb architectural restoration. Building on that record, Reed Hilderbrand examined available historic plans, ordnance surveys and photographs, and documented existing site conditions, in order to establish Lutyens’s design intent for the landscape as context for the renewal of the flower gardens. Robert Couturier decorated the house, saying that he “shares Lutyens’s playfulness and fondness for mixing styles and eras”. The first hint of this comes right in the entrance hall, where a steel chair by Ron Arad stands in one corner and a pink cardboard chair by Frank Gehry in another. Couturier’s most daring statement, however, is in the library, where a huge, gold-color, ribbon-shaped ceiling light by Ingo Maurer stretches from one end of the room to the other. The light had to be shipped all the way from Hong Kong and fitted by a team from Germany. A Gio Ponti brass light fixture from 1964 and a burgundy Zaha Hadid sofa mix with original Lutyens light fixtures painstakingly reproduced by Lutyens Design Associates.

If you wish to pay with a cheque, please use the online booking facility above, and then choose the “pay by cheque” option on the payments screen. This will reserve you a ticket(s) and give you instructions on where to send your cheque to. All cheques should be made payable to “The Lutyens Trust” and made to the sum of £45 or £50.