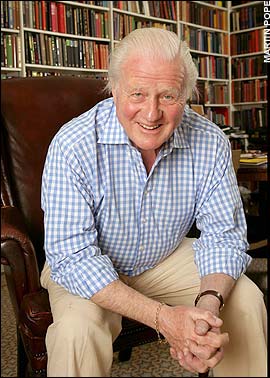 With the death of author, historian and broadcaster John Julius Norwich, aged 88, last summer, The Lutyens Trust has lost a (literally) noble supporter and a link with the past. His mother, society beauty Lady Diana Cooper, once said that she “would give up anything if Ned Lutyens was free for lunch — he was such fun”. I have not been able to ascertain definitively whether the young John Julius met Lutyens but it would be surprising if he had not. He was devoted to his mother, who bore him late and doted on him. (His father, diplomat Duff Cooper, was of a generation whose males could be shy, even in the presence of their sons, although, in his case, he was far from backward with women.)

While Lutyens was socially less exuberant than the suave, self-confident Norwich, they would have shared some good jokes. Of all the tributes John Julius received for his three-volume work, Byzantium: The Early Centuries (1989), his finest achievement, the ones of which he was proudest came from a New York immigration officer and a man in Oregon. The former looked at his passport and said, “When is volume three coming out?”. The latter wrote to him saying, “Tomorrow I will go back to work as a welder for the railroad but tonight I am the acting emperor of Byzantium”.

Was either anecdote wholly true? Pass. Who wants to spoil good stories? Certainly not John Julius, who was full of them. He studied Russian and French at the University of Oxford, then became a prolific writer. He was above all a source of vitality. His lectures were delivered with a showmanship that lifted the spirits. He always maintained that he was shallow — that he sought to popularise history rather break new ground through research. But his many fans didn’t regret his lightness of touch, which carried them through the labyrinths of Sicilian history and other complexities; it also made him a natural for television. He went on writing into his old age, partly out of a zest for life, partly for income. “My father was a terrific spendthrift,” he recalled. “Mother was much the same. I inherited virtually nothing.” He himself lived by the maxims, “Always push the boat out” and “When in doubt, say, ‘Yes’”. He made no fortune then but did inherit the ability to have a good time and share it with others.

John Julius Cooper, 2nd Viscount Norwich, as he should properly be called, used his celebrity to towering effect as chairman of the Venice in Peril Fund, which he joined in 1971 in the hope of rescuing a city he visited 200 times. Lovers of Venice and other architecture — not least Lutyens’s — will regret that a great champion of beauty has left the world. There are too few of his ilk.

A Tribute to Colin Amery