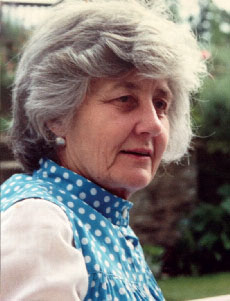 I would like to pay tribute to all that Clayre did for the Lutyens Trust over the years. The Trust itself was launched on the 14 May, 1985, a year that also saw the publication of The Letters of Edwin Lutyens to his Wife, Lady Emily, edited by Clayre and her daughter Jane Ridley. Their book has been a godsend for anyone interested in Lutyens. As its introduction describes, Lady Emily, on her death in 1964, left her husband’s letters to her daughter Ursula, and when she died in 1967 the letters were left to her daughter-in-law, Clayre. Clayre and Jane then took on the enormous task of making a selection from some 5,000 letters for publication and, in so doing, acquired a considerable knowledge of Lutyens’s life and work — a knowledge that Clayre rarely showed in our small, competitive circle. I remember we celebrated the book’s publication at a party at 13 Mansfield Street, Lutyens’s last London home.

In 1988 Clayre became a Trustee, stepping down in 2008 to become one of our Patrons in 2009. She did so much for the Trust and particularly for Goddards. Bill Hall gave Goddards to the Trust in November 1991 and for three years she helped Jane Brown to open the house to the public. Then, when we no longer had the funds to run it, Clayre was instrumental in making the arrangement with the Landmark Trust to take it over on a long lease. She then had the role of running our annual Goddards week in June, which she did until 2007, to be followed by Christine and Andrew Barnett in 2008. While staying at the house during these weeks, Clayre organised the food and hosted the SPAB scholars and other guests.
She was always so welcoming. She also catalogued the Goddards library and produced its first guidebook.

In 1998 she also took over as Editor of our Newsletter from Mary Lutyens, handing over to Millicent Sillince in 2006. She oversaw the production of two to three Newsletters a year, always managing to get them out with seemingly little fuss, having gently persuaded us all to produce our copy as if there was all the time in the world. And she herself was an excellent writer, which greatly helped.

I end with two further tributes:

“Of all my friends, Clayre was probably the cleverest, full of humour and experience and kindness, and never, ever showed it. Life dealt her some bitter blows, and she never showed those either. It was always interesting to spend time with her and I shall miss her very much.”

“I would like to mention her wisdom and generosity with her time over Goddards. She wrote and produced our first guidebook and was always willing to come down and help. Her flair for making the house look just right was faultless. With it all she was such good company, her laugh lightening the direst moments.”