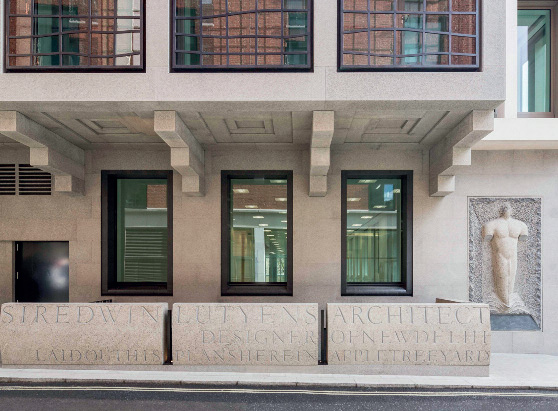 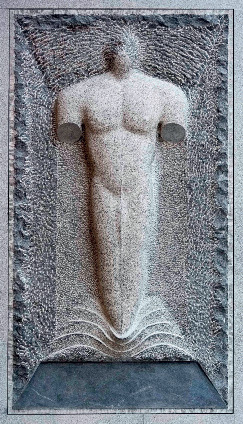 By its creator Stephen Cox RA

It was perhaps 10 years ago when architect Eric Parry took me to view a building in St James’s, bounded by the northeast junctions of St James’s Square, Duke of york Street and Apple Tree yard. An undistinguished brick building occupied most of the site. In Apple Tree yard, a mews, were some semi-industrial buildings and a well-known property that once housed a Wheelers Oyster Bar, which gave this corner of London — which I’d visited before — a degree of fame. unknown to me, and the reason I was there, was that at Number 7 Apple Tree yard had been the office of Edwin Lutyens, where he had designed New Delhi. Since I’d worked with Eric previously and because he knew I’d worked in India, he had ideas that he thought might lead to a collaboration at a later date.

Changes of ownership of the site delayed this but, with its acquisition by developer Green Properties, Eric was commissioned to design its office building at 8 St James’s Square. He, in turn, recommended me to the developer. For the new building, I created the sculpture Relief: Figure Emerging — which emerges from the ground-floor basalt plinth of Eric’s new building — and basalt slabs and inscriptions on the corner of Apple Tree yard and Duke of york Street, entitled Inscribed Rail to EL.

My connections with India made this project particularly apt. I’ve been carving sculpture in South India, where I have a workshop in Mahabalipuram, since 1985 when the British Council invited me to represent Britain at the art show Triennale-India. At the time, I visited New Delhi and was struck by its grandeur. Staying with friends in the West End of Delhi, I frequently passed the Rashtrapati Bhavan — the Viceroy’s Palace — driving through secreted gateways known to them. I was able to explore the extraordinary detail and imagination of its fabric, from plinth to dome, which was astonishing to me and of a scale akin only to the ancient sites of Europe and the Middle East. Lutyens’s genius was in synthesising Indian styles of India for what he termed a new “Order of architecture”.

To highlight the historical link between Apple Tree yard and Lutyens’s work in India, I proposed that long granite blocks shielding the light well of an underground car park be reformed to my design and carved with the following inscription, “Sir Edwin Lutyens Architect… Designer Of New Delhi… Laid Out His Plans Here In Apple Tree yard”. This piece was derived from Buddhist stupa rails, which can be seen at the ancient site of Sanchi and which Lutyens used at the Viceroy’s Palace.

Relief: Figure Emerging was inspired by the sculptures of gods at the cave temples in India, especially in Mahabalipuram, which are carved into the living rock. My Relief sculpture and the elements of the rail were hand-carved, with the help of South Indian temple-carvers at Mahabalipuram from immense blocks of basalt quarried near the holy city of Kanchipuram. In early 2015, the sculpture and “rail” blocks were shipped to Canterbury, where I finished the carving and the lettering was executed.

With my sculptures carved in India for over 30 years, I have endeavoured to produce a contemporary art with a universal language that resonates with a classical tradition drawing upon Egyptian, Indian, Cambodian and modern British sculpture.