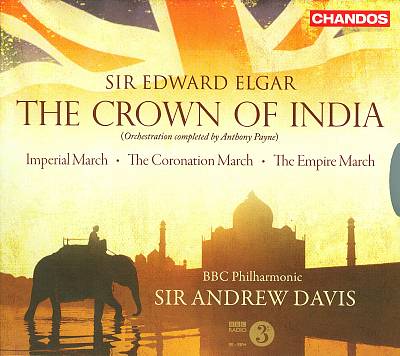 The Crown of India

Every Lutyens enthusiast knows about the Delhi Durbar of December 1911, attended by the King Emperor and his Consort, King George V and Queen Mary. This splendid event witnessed the proclamation of Delhi as the Capital of India, and acted as the catalyst for the layout of New Delhi, the design of the Viceroy’s Residence and much else. The Durbar was filmed and this still survives in fragments. What is less well-known is that, early in 1912, the theatrical impresario, Sir Oswald Stoll commissioned ‘an Imperial Masque in two tableaux’, The Crown of India, from Sir Edward Elgar. This ran for several weeks, most appropriately at the London Coliseum. It depicted, in spoken declamation and arias, the ‘beauty contest’ between rival cities for the site of the new Imperial Capital, which has, in confidence, preceded the official announcement. Elgar raided his notebooks and while the music may not be consistently on a high level, it contained some splendid episodes, particularly the March of the Mogul Emperors.

Elgar himself conducted a suite of five movements for ‘His Master’s Voice’ in 1930 – was the company looking towards the official inauguration of New Delhi in February 1931, I wonder? The swagger of Elgar’s conducting still remains inimitable. I wonder whether EL bought, or was presented with a copy? Many years ago, I remember Mary Lutyens telling me that her father loved rousing marches, and Pomp and Circumstance No. 1, with its refrain of ‘Land of Hope and Glory’ later added, was a particular favourite.

Now, Chandos has issued the first complete recording, by the BBC Philharmonic Orchestra under Sir Andrew Davis. This, in itself, was a remarkable undertaking as many of the orchestral parts had disappeared in a warehouse demolition in the early 1970s, but Anthony Payne, who reconstructed Elgar’s Third Symphony, from musical fragments a few years ago, has restored the missing sections. The text is partly narrated and partly sung and is complete on one disc, the second omits the narration, for those who feel that the Imperial sentiments expressed in the libretto by Henry Hamilton are too politically incorrect for our time. The fill-ups include Elgar’s Imperial March, written for the Diamond Jubilee of Queen Victoria in 1897, the Coronation March for King George V and Queen Mary, written in 1911 and the Empire March, which Elgar conducted at the newly opened Wembley Stadium at the opening of the British Empire Exhibition in 1924.

All this could not be better performed and all musical friends of The Lutyens Trust should purchase this beautifully presented double CD album without delay – reference CHAN 10570 (2).