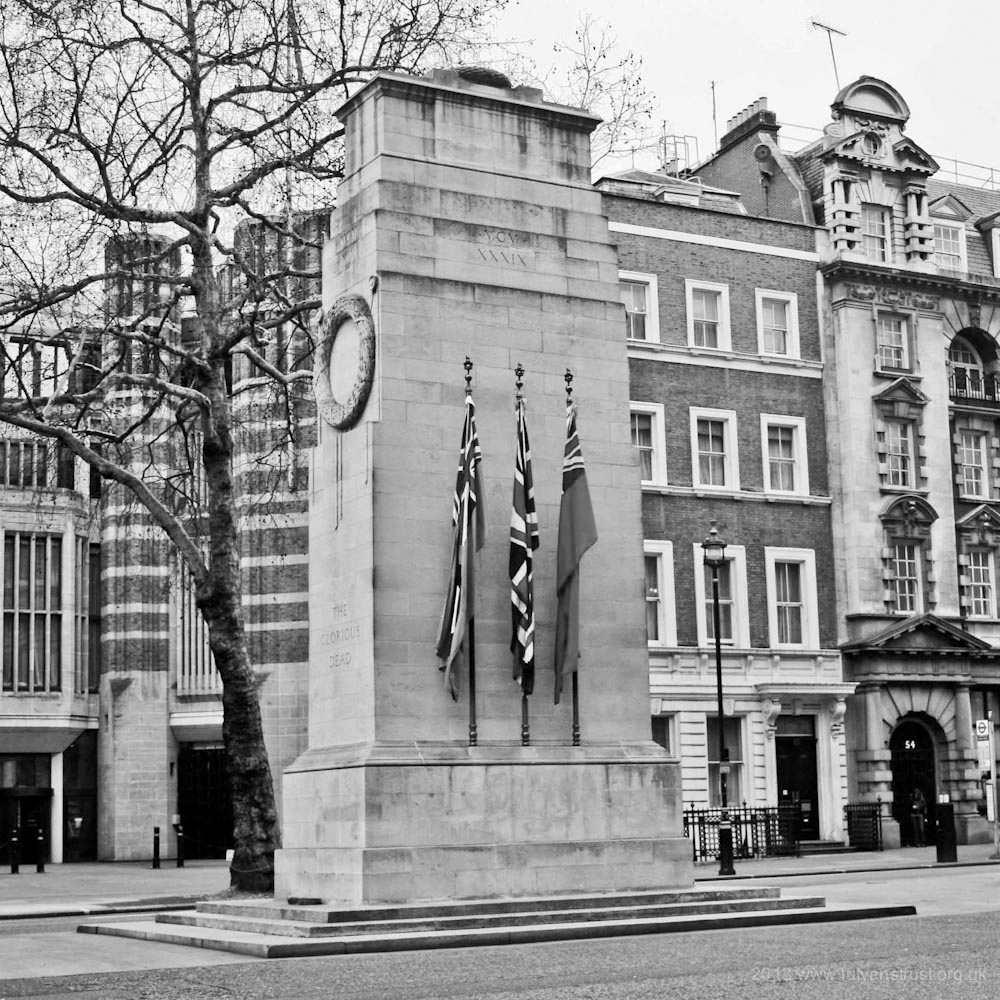 Stilling the Pulse of Time

Reprinted from the Wall Street Journal by permission, Nov. 8, 2013
Down Jones & company. All rights reserved

On the 11th hour of the 11th day of the 11th month in 1918, firing ceased on the Western Front. Out of the ashes of World War I, the centenary of whose outbreak falls on this day next year, rose the Cenotaph in London, a remarkable monument commemorating, as its inscription says, “The Glorious Dead”.

The war reaped a vast whirlwind of death. New weapons butchered on a hitherto unimaginable scale: airplanes, machine guns, poison gas and artillery killed not hundreds or thousands but millions. Then there were the ghostly armies of the missing whose bodies were shredded or vaporised or hurriedly buried and then forgotten. Even today, farmers working now-peaceful fields unearth their bones.

The memorialisation of so many dead and missing presented a task never confronted after any earlier war. How were they to be commemorated? In Britain, hundreds of memorials were erected in grieving villages and cities, but only one became the embodiment of the nation’s mourning: the Cenotaph.

With the signing of the peace treaty at Versailles in 1919, the War Cabinet, led by Prime Minister David Lloyd George, planned Peace Day. This was to be a festive celebration of the end of the carnage. The government Office of Works, under the direction of Alfred Mond, asked Edwin Lutyens to design a temporary memorial to be erected in Whitehall, along the route of a massive victory parade of the Allied troops through central London. Lutyens, who had made his mark designing handsome country homes, was the architect of the new capital of the British Raj in New Delhi, a commission that had catapulted him to international fame.

Just two weeks after hearing from Mond, Lutyens had a plan in hand, one deeply rooted in the Classical past, not only in form but in function. The monument was to be a cenotaph, a structure incorporating an empty tomb, often built to memorialise a missing warrior. Constructed of wood and plaster, Lutyens’s four-sided composition (left), which ascended through a series of subtle setbacks toward a summit capped by a sarcophagus, was ready for the Peace Day victory parade of July 19, 1919.

The Cenotaph struck a deep emotional chord. In a memo to the War Cabinet just four days after the Peace Day parade, Mond noted the “growing public” interest in a permanent cenotaph and wrote that Lutyens was eager to design it “on the same lines”. The War Cabinet, which included Winston Churchill, approved the new Cenotaph, as it was named. Few monuments of such distinction have been conceived and built in such haste.

Other than replicating the wood and plaster in Portland limestone, Lutyens made almost no change to the design except for one important refinement: entasis, a principle used, for example, by the Ancient Greeks, in which vertical lines are given a slightly convex curve as they taper upwards to fool the eye, which would otherwise see them as out of true alignment. The result was a minimal but sophisticated arrangement of shapes, mouldings and setbacks derived from Classical prototypes. Bereft of any overt religious, national or didactic symbolism, its power arose solely from its stark, sombre, unadorned form.

The Cenotaph’s unveiling on November 11, 1920 was heightened by another solemn commemoration: the burial of the Unknown Warrior, whose body was returned from France for entombment in Westminster Abbey to memorialise the thousands still missing.

Draped with two large Union Jacks, the Cenotaph was unveiled by King George V as the gun carriage bearing the Unknown Warrior stopped at the monument on its way to the Abbey. Thus the memorial function of the Cenotaph, crowned by an empty sarcophagus, was heightened by the presence of an unknown soldier. Relatives of the missing were comforted because, as they said, it was possible to believe that he might be their husband, son, father or brother. For many, the vacant tomb of Lutyens’s Cenotaph would recall Christ’s resurrection and its embodiment of salvation for those who have died.

Describing the ceremony, the Times of London reported that Big Ben “boomed out louder, it seemed, than ever one hears it even in the stillness of dawn”. The king “released the flags…they fell away, and it stood, clean and wonderful in its naked beauty. Big Ben ceased; and the very pulse of Time stood still. In silence, broken only by a nearby sob, the great multitude bowed its head”.

In the following days, millions of war widows, parents and orphans of the dead flocked to the Cenotaph, surrounding it with mountains of flowers, many brought from remote country villages by the hands of heartbroken families.

The dedication ceremony designed for the new Cenotaph gave added meaning to the monument. The event was planned by a member of the War Cabinet, The Lord Curzon of Kedleston, the epitome of English aristocracy and privilege. As Viceroy of India, he was the impresario of the great Delhi Durbar of 1903, a spectacular two week pageant of Imperial pageantry featuring a cast of thousands.

Curzon, who had organised the events around the unveiling of the temporary Cenotaph, was now asked to design the ceremony for the dedication of its successor. But if anyone thought he would create a majestic procession, they were wrong.

Instead, he produced something very different, a service of the utmost modesty and sobriety that would complement Lutyens’s austere monument. The ceremony would be understated, poignant, brief — the hymn “O God Our Help in Ages Past”, the doleful “Last Post” and two minutes of silence, not of prayer but in memory of the fallen. Some nine decades later, Curzon’s touching ceremony is still celebrated at the Cenotaph on Britain’s annual Remembrance Day.

Curzon insisted that the ceremony should be for veterans and war widows. Similarly, places for the service in the Abbey, he declared, were to be assigned not to “society ladies or the wives of dignitaries, but to the selected widows and mothers of those who had fallen, especially in the humbler ranks”.

This chimed with the widespread, democratic appeal of the Cenotaph, which neither proclaims victory nor sentimentalises the fallen, but instead brilliantly evokes the loss of millions.

Bruce Cole, a former chairman of the National Endowment for the Humanities, is a senior fellow at the Ethics and Public Policy Centre.