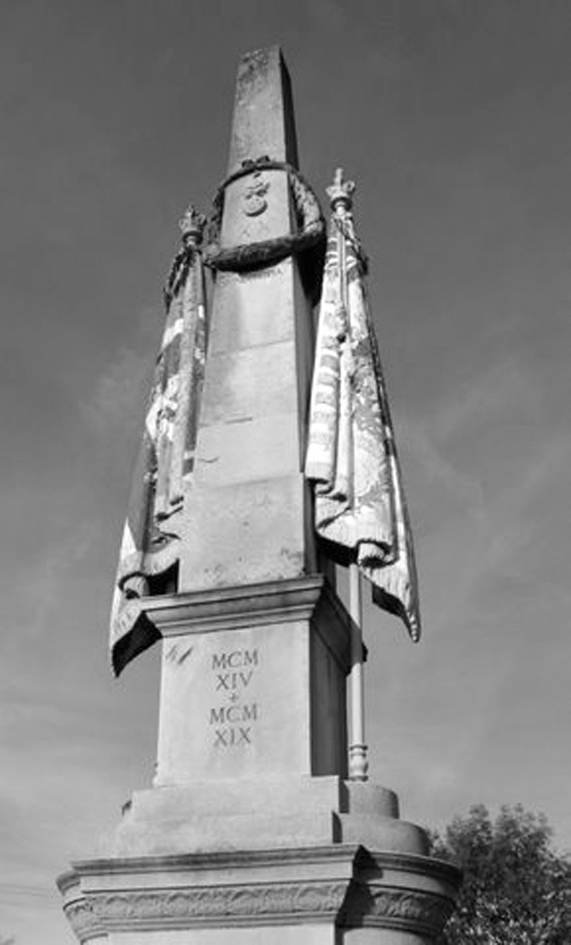 We are indebted to Col. Michael J Glover for the following article.

On Sunday 27th September 2009 a small ceremony will take place in Gallipoli Garden in the centre of Bury, Lancashire, when Viscount Ridley KG GCVO TD will unveil the restored Regimental Memorial. This has echoes of a similar ceremony that took place on Tuesday, 25th April 1922 when Lieutenant General Sir Beauvoir de Lisle first unveiled the Regimental Memorial on Bolton Road just outside of Bury.

The Regimental Monument was originally located at the gates to Wellington Barracks that was then the Depot of the Lancashire Fusiliers. The date was significant as it was the 7th Anniversary of the landings at Gallipoli where the regiment was awarded the now famous “Six VCs before breakfast.” The Lancashire Fusiliers finished the war with more Victoria Crosses than any other infantry regiment in the British Army but in doing so lost 13,642 men.

It was popularly agreed that something should be done in Lancashire to honour this achievement and sacrifice. So at a meeting held in Salford on 9th January 1919 chaired by Colonel George E Wike a committee was formed that agreed to establish an appeal that would raise funds to achieve two things, firstly establish a compassionate fund and secondly create a permanent memorial.

It was eventually decided that the memorial would consist of a Roll of Honour listing the 13,642 killed in the Great War, a fine set of silver drums, and a monument in bronze or stone at the Regimental Headquarters.

The architect chosen was Sir Edwin Landseer Lutyens RA. However Sir Edwin was not chosen at random as he was already part of the regimental family. He was the son of Captain Charles Lutyens who had served in the Regiment throughout the latter half of the 19th Century. The uncle of Captain Charles Lutyens, Major Englebert Lutyens had also served in the Regiment during the Napoleonic Wars and attended Napoleon during his last days in exile on St. Helena. As a consequence of this deep family connection with the Regiment Sir Edwin gave his services, “freely, ungrudgingly, and without fee or reward.”

For some 40 years the Memorial remained at the entrance to the Depot on Bolton Road. However, as the Army shrank in the 1960s, Wellington Barracks became surplus to requirements and was sold off for redevelopment. The Regimental Headquarters and Monument had to move and were consequently relocated to a small remaining part of the old Depot site. In 1968 the Lancashire Fusiliers amalgamated with the three other English Fusilier Regiments to form what is celebrated today as the Royal Regiment of Fusiliers. Thus on 23rd April 1968 the Monument passed from being a memorial to The Lancashire Fusiliers to one commemorating the deeds, accomplishments and sacrifice of The Royal Regiment of Fusiliers and remains so to this day.

As I write this article I have just learned that the Second Battalion of the Royal Regiment of Fusiliers has lost another three soldiers in action in Afghanistan. This tragic loss is a powerful reminder to those who would regard the memorial as merely an attractive piece of architecture. The reality is that this is a living monument, the focus for annual commemoration and the paying of tribute to Fusiliers killed in the service of their country today.

The original plan to relocate the Museum Headquarters and Monument had been formulated in 1956 but abandoned in 1958 due to lack of funding. In 2004 the plan was revived and a major project to relocate and re-display the Lancashire Fusilier Collection and establish a Royal Regiment of Fusiliers Collection started. In May 2009 as a result of five years’ hard work and the collection of £4.2million the Museum and Collections moved into the Grade 2 Listed former Bury Technical School in the centre of Bury.

The Lancashire Headquarters of the Royal Regiment of Fusiliers followed and as the Monument is part of the Headquarters, plans were made to move it too. The Monument has undergone much needed restoration and conservation. It has been rebuilt in a small park next to the Museum that has been recently re-named Gallipoli Garden. Here it will be seen by all those who not only visit the Museum but all those who come into the town centre. Its future is bright as it becomes the centre of attention in a busy part of town, rather than a forgotten relic on the outskirts.