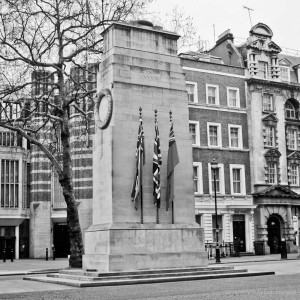 Modern British Sculpture was initiated by the former President of the Royal Academy, Sir Anthony Caro and has been realised by Penelope Curtis, who has recently left the Henry Moore Foundation to become Director of Tate Britain, and the sculptor, Keith Wilson. The exhibition is not conceived along the traditional lines of an art historical stylistic survey but more imaginatively sets out to identify different trends and influences in 20th century sculpture. The Royal Academy galleries are among the most beautiful in London and the curators took the decision to use the spaces generously, allowing the exhibits to make their statement forcefully. This does mean of course that not everyone who is anyone gets included! Eduardo Paolozzi and Anthony Gormley are omitted. So it was with delight that one discovers Lutyens is a major player.

In the century when form overtook narrative and figure, the exhibition opens in the central hall with a reconstruction of Edwin Lutyens’ Cenotaph by MDM Props Ltd and blown up photos of Epstein’s sculptures The Ages of Man, 1907, on the British Medical Association building on the Strand. The curators boldly set out the 20th century conflict of abstraction and figuration. In July 1919 Lutyens was commissioned to design a sculpture for the First World War Peace Celebrations. MDM have recreated the wood and plaster temporary memorial, an unadorned and figureless monument representing no religion, race or rank, which was replaced later in Portland stone. It struck a chord with the public and became the symbol of the nation’s loss, which was replicated around the world in similar form. For members of the Lutyens Trust more used to seeing the master in an architectural context, it is wonderful to see the Cenotaph in this exhibition and distressing that Epstein’s too powerful evocation of humanity was vandalised in the 1930s.

In 1900 Britain was still an imperial nation and the depository of artistic loot from all over the world. A cleverly chosen selection of sculpture from the British Museum shows how inspiration came not only from Greece, but also Egypt, Africa and the Pacific. Charles Sargeant Jagger (1885-1934) whom we know in the context of New Delhi (he carved the elephants at Rashtrapati Bhavan and the statue of George V, which now sits unloved in the derelict Coronation Park) is represented with a relief Belgian Peasants assisting British Wounded, 1921-23. Jagger found inspiration in Assyrian carving. Sex is also important; Epstein’s massive Adam, 1938-39, from Harewood House, baring his manhood, shares a whole gallery with a diminutive Snake,1924, by Henry Moore; there is honestly no room for another work in that gallery. In the next room Alfred Gilbert’s Jubilee monument to Queen Victoria brings the viewer back to the more western European tradition. Set on the same axis as the Epstein, the contrast could not be greater. Then there is the influence of the Orient; here the collections of Chinese and Japanese ceramics, bequeathed in 1934 to the Victoria & Albert Museum by George Eumorfopoulos, have been raided and placed alongside the pots of Bernard Leach and the work of Naum Gabo and Barbara Hepworth. Eumorfopoulos was an early patron of Hepworth, seeing similar abstract beauty in her work. Two site specific commissions by mid-century titans are Reclining Figure, 1951, done for the Festival of Britain by Moore and Single Form, Memorial, 1961, by Hepworth, commemorating the premature death of Dag Hammerskjold and commissioned for the United Nations. In this gallery one can look sideways through the arch to the Cenotaph, all embodied ideas of post-war rebirth and memorial.

No one is sure these days about what constitutes sculpture; in the second half of the exhibition many media are examined, painted metal – Anthony Caro’s Early One Morning, 1962, has a whole room. The notorious bricks, Equivalent VIII, 1966 by Carl Andre lie alongside Chalk Line, 1984, Richard Long’s engagement with the environment. Now one wonders what all the fuss was about. There is also the preoccupation with detritus nicely packed up in Stack, 1975, by Tony Cragg and a Damian Hirst Let’s Eat Outdoors Today, 1990-91, a vitrine containing the remnants of a barbecue, complete with living bluebottle flies.

What would Edwin Lutyens have made of all of this later sculpture? I do not know but the past is another country, and in the Cenotaph he did express advanced ideas in an abstract form which had grown out of his playing with classicism. Edwin Lutyens, former PRA, is at the Royal Academy alongside all those 20th century sculptors who pushed the envelope. Accompanying the exhibition is a comprehensive catalogue, Modern British Sculpture, edited by Penelope Curtis and Keith Williams, which includes many articles by other contributors, including an excellent commentary on the Cenotaph by Catherine Moriarty. This is a thought provoking show and runs until 7th April.