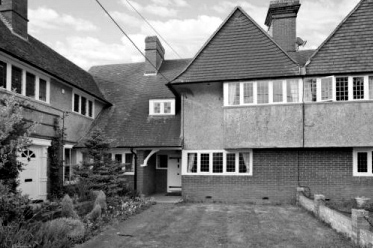 Three of Lutyens’s finest houses have come onto the market for sale: two in the country and one in London. The country houses are Marshcourt in Hampshire and Folly Farm in Berkshire, both Grade I listed, and the town house is 7 St James’s Square in Westminster, which is only Grade II, despite its magnificent panelled staircase and vaulted library.

Marshcourt – or Marsh Court as it was called from 1948 to 1989 when it was a prep school with a magazine called “The Marsh Courtier” – was built in 1901-04 for South African stockbroker and sportsman Herbert “Johnie” Johnson, whose passions were fishing and billiards. He indulged the first by having more than 1,200 acres of land that ran down to the River Test (though today the house has only 47 acres that stop well short of the river), and the second by getting Lutyens to design the most elegant billiard table in the world (and an oak scoreboard and cabinet that was sold at auction in 1992). Lutyens was happy to enjoy his client’s fishing and billiards.

After the school closed in July 1989, it suffered from neglect and vandalism. Six chimneypieces were stolen, most of Johnson’s hunting trophies that had hung in the school corridors and dormitories for more than 60 years disappeared, and the Grade II* listed Jekyll gardens became overgrown. Eventually the property was bought in 1993 by Geoffrey Robinson after its price had been cut from £2.75 million to £800,000. He and his wife Marie Elena painstakingly rescued and restored the ten bedroom house and its outstanding gardens before reselling Marshcourt in 1999 for about £5 million to Stephen Noar, the dentist who co-founded the highly successful Denplan in 1986 and sold it to PPP Healthcare in 1993. He is now seeking offers over £13 million for Marshcourt through Knight Frank.

The same agents are seeking a mere £6 million for Folly Farm at Sulhamstead, Berkshire, which to me is a much more habitable nine-bedroom house with five cottages and 29 acres of Grade II* listed Jekyll gardens and grounds. The original 17th-century farmhouse was remodelled and extended in 1906 by Lutyens for H – or was it C C (as Gertrude Jekyll’s nephew Francis wrote) – Cochrane? No one seems to know for sure. Never mind: Ned was called in again for further additions and alterations in 1912 for Zachary Merton and his wife Antonia. He also designed four of the five cottages in the grounds, three of which are available as separate lots.

William Nicholson painted a magnificent trompe-l’oeil mural in the dining room of Folly Farm. It does not survive (unless it can still be recovered by a skilled restorer), but it allows me to make the link between Nicholson’s studio at 11 Apple Tree Yard, which was originally a stable in the mews behind St James’s Square, and Lutyens’s Delhi office two doors away at 7 Apple Tree Yard, neither of which were rebuilt by Lutyens, though he rebuilt 7 St James’s Square in 1909 for the Farrer brothers, three bachelor lawyers, whose legal practice Farrer & Co is still at 66 Lincoln’s Inn Fields, the façade of which was restored by Lutyens in 1930.

Hermes Real Estate, which now owns 7 St James’s Square, appointed Eric Parry Architects for the redevelopment of 8 St James’s Square and 7 Apple Tree Yard as 81,000 sq ft of offices linked to 7 St James’s Square (whose attic storey on the fourth floor will be converted into three flats), but is now looking to sell the whole site with planning permission through Jones Lang LaSalle.

Finally, there is just room to mention a charming group of early-Lutyens cottages that I have never seen illustrated in any book on Lutyens, or even mentioned – apart from a brief entry in the chronology in the Memorial Volumes, where it says: “1896 Cottages and Shop at Micheldever, Hants. The Earl of Northbrook.” One reason why the properties are hardly known is that they are not at Micheldever, but four miles away up the Andover Road at Micheldever Station, where the former village store set at right-angles to an adjoining pair of cottages are now known collectively as 1-3 Victoria Cottages, though they are confusingly listed Grade II by English Heritage as “Old Stores, 1 and 2 Micheldever Station.”

The three-bedroom cottage in the middle of this Arts & Crafts group (whose address is 2 Victoria Cottages) was put on the market at the beginning of May by the Winchester office of Cluttons at £250,000 – and not surprisingly had already been snapped up by the time I visited it. However, the rural idyll was spoiled by a planning notice attached to the neighbouring Station Garage stating that two planning applications have been made to build 22 houses on the site of the garage and the large scaffold yard behind Victoria Cottages. Another dream shattered.

Visit to Liverpool Exhibition and Cathedral