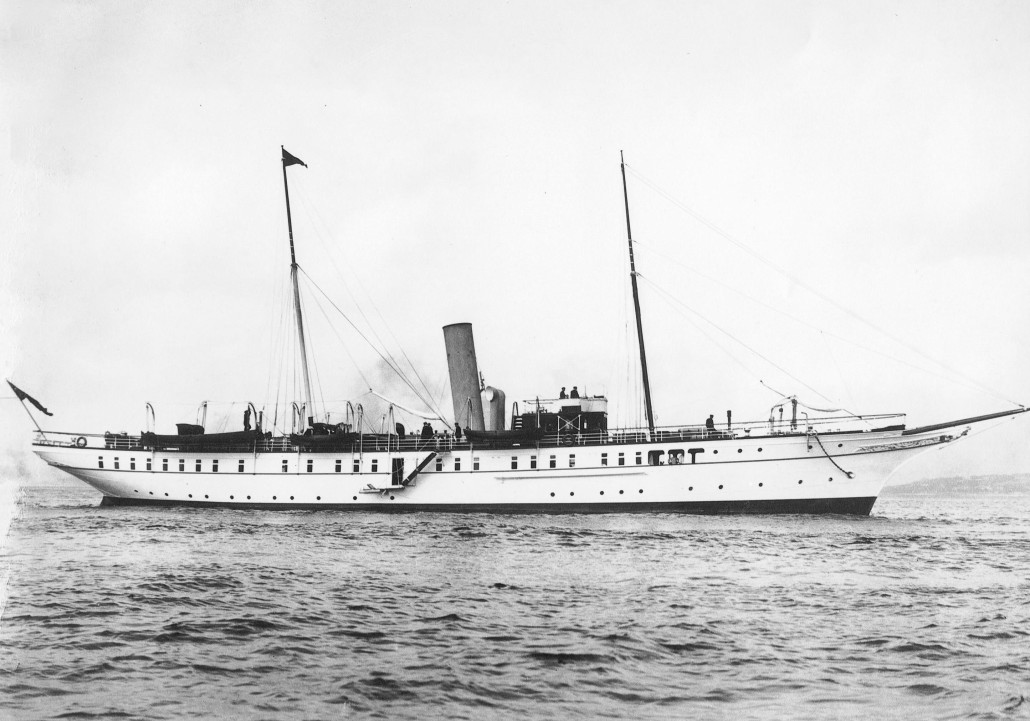 One of the least-known works of Lutyens are his designs for the panelled interiors of a luxury steam yacht Queen of Scots, built for W A Coats, a director of the world’s largest cotton-thread manufacturers J & P Coats of Paisley (now Coats Paton PLC). There is no mention of Coats in the Lutyens Memorial volumes, or in his letters to Lady Emily or Jane Ridley’s biography of Lutyens. However, Lloyd’s Register of Yachts for 1904-5 lists Queen of Scots as a steel-hulled twin-screw schooner of 632 tons, designed by naval architect George L Watson and launched from the Fairfield Shipbuilding & Engineering Company’s yard at Govan on the Clyde on Saturday 19 March 1904.

Described at the time in The Yachting World as one of the most “kenspeckle” of the many fine steam yachts on the Clyde (which for those whose Scots is a little rusty means “having so marked an appearance as easily to be recognised”), she was a two-masted schooner with a round stern and clipper stem, 162ft long and 28ft 3in broad, with a complete shade deck fitted from stem to stern, and having large, opening sidelights, providing ventilation for the cabins on the main deck.

The Coats family were prodigious yacht-owners, Sir James Coats, 1st baronet (1834-1913), owning no fewer than 16 yachts in his lifetime. His cousin William Allan Coats (1853-1926) of Skelmorlie Castle, Ayrshire (and later of Dalskairth, Dumfries) was more frugal, limiting himself to five yachts, of which the graceful Queen of Scots was the largest and the finest. He left an estate valued at £3.9 million (equivalent to about £1.6 billion today).

Lloyd’s Register for 1927 shows that Queen of Scots was then inherited by Coat’s two sons, Major J A Coats and T H Coats, but by 1929 they had sold her to Anthony J Drexel, Jr. of Chateau de Courbois, France. In 1939 she was acquired by a Greek shipping company, Vergottis and renamed Dolores, but in 1947 she was bought by Compania de Navegacion of Manguilla, Spain, who renamed her Queen of Scots. By then, various alterations had reduced her tonnage to 626. Finally, on 1 May 1952, she suffered the indignity of being wrecked, then sold for break-up and towed to a breaker’s yard in Genoa.

Once described as “one of the loveliest steam schooners in the world,” I have only managed to track down a black-and-white photograph of her exterior, but none of her cabins, which it is known had oak panelling and flooring. I see the interiors as being rather like those at Marshcourt (especially as this has a room over the library called the quarterdeck). It would be appropriate for a steam yacht with classification of 100A1 to have Grade 1 interiors.