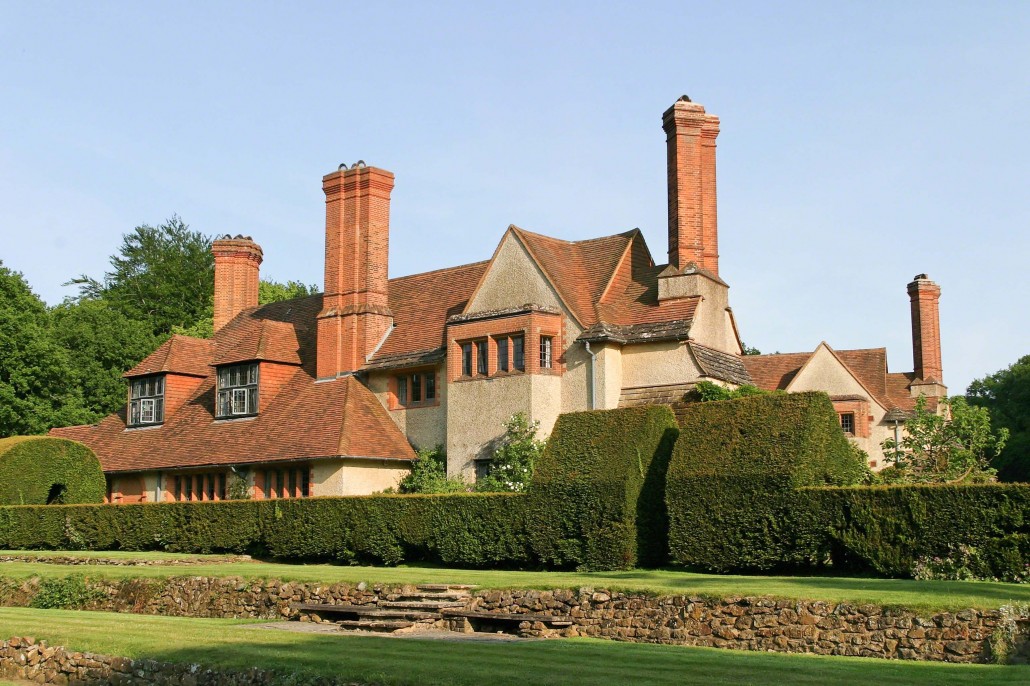 It is during the week in mid-June every year that the Lutyens Trust is able to make full use of Goddards for all its activities. The annual meeting of the Trustees and the Members of the Events and Photographic Committees was held on Saturday 12 June. The most significant Trustee reports were on the attendance of four Trustees at a Conference held in April at New Delhi and casework in Derbyshire. The Delhi Chapter of INTACH organised a conference on the Conservation of Shajahanabad and New Delhi, with the aim of applying for Heritage City status from UNESCO. Dr. Mervyn Miller and Professor Jane Ridley gave papers. The Lutyens Trust was represented by Dr. Mervyn Miller at a public enquiry to oppose the application to erect a wind farm overlooking Gledstone Hall in Derbyshire. Also much progress has been made on the organisation of the paper and photographic archives, which will eventually be on a database.

Christine Barnett very kindly looked after the three SPAB students who stayed at Goddards for three nights from Sunday 13 June. They took the opportunity to study and sketch Goddards and attended the Study Day. The Landmark Trust standard of comfort and Christine’s excellent hospitality was greatly appreciated.

On Sunday 13 June the use of Goddards was further extended this year when Martin Lutyens kindly agreed to deliver his talk ‘From Country House to Viceroy’s House’ which he had given at Lindisfarne Castle on 9 March at the invitation of Catherine Atkinson, the National Trust Property Manager. It was a sunny day, tea was served and 25 members enjoyed hearing Martin’s personal view of his great-uncle’s architectural journey ending in the Rastrapati Bhavan. This was followed by an impromptu invitation from Anna Hunter to visit her house, Chinthurst Hill in Wonersh and see her recent renovation of the Coach House.

On Wednesday 16 June the annual Study Day was devoted to looking at the work of Sir Ernest George. In April the Lutyens Trust had visited Batsford House, one of George’s greatest country houses and the Trust was fortunate to secure Professor Hilary Grainger, who is the leading authority on George. She gave two talks, in the morning on “The Architecture of Sir Ernest George & Partners” and after a good lunch she spoke on “‘The Eton of Offices’, 18 Maddox Street, W.1, Pupils and assistants.” In the afternoon the group visited Woolpits in Ewhurst, which George built for Sir Henry Doulton. This building is now the Duke of Kent Preparatory School and Neil Lucas, the Site Manager conducted the group around the building explaining all the difficulties of maintaining the building, especially preserving the terracotta brickwork which was manufactured by Doulton.

Professor Grainger opened her discussion on George with an amusing anecdote about her correspondence in 1974 with Michael Mason, the owner of Eynsham Hall in Oxfordshire, who could not understand why she wished to study George who had designed what he regarded a cold, draughty house for his parents. As she took us through George’s considerable career, his mastery of style, his ability as a planner and craftsmanship, his reputation as a great Victorian architect became evident. All these attributes were to have considerable influence on the younger generation of architects who passed through his office, including Edwin Lutyens. We look forward to the publication of Professor Grainger’s book on Sir Ernest George in the autumn.

The Arts & Crafts Movement in Surrey held their Study Day at Goddards on Thursday 17 June and Martin Lutyens delivered his talk once again.

Claire Hill ably orchestrated the whole week and in between these public events work was done on the archives in the library, so one could say that Goddards had been well and truly used and enjoyed.