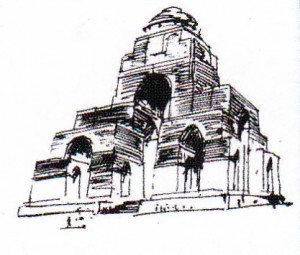 The outdoor exhibition at the Thiepval Visitor Centre commemorating the inauguration of Lutyens’s Memorial to the Missing, 1 August 1932, was unveiled on 19 April 2012 by Monsieur Christian Manable, Président of the Conseil-Général of the Somme. Its curator Michael Barker, representing the Lutyens Trust, gave a commentary on the panels in French to the assembled crowd which included local dignitaries, a British contingent including Col. Graham August, Military Attaché, Sir Frank Sanderson (instigator of the Visitor Centre), Nigel Steel (Senior Historian, Imperial War Museums) – who assisted in creating the panels – and Christopher Berkeley (Charles Skey Trust – who was an important contributor to the Thiepval Project). The local Press was in attendance and duly reported the event.

The Conseil-Général has published an illustrated commemorative booklet written by Michael Barker with extended texts, additional illustrations, citing useful websites and with a brief bibliography – paying tribute to invaluable material hailing from members of the Lutyens Trust.

Interestingly, the village Mairie was built at the same time as the Memorial by Finney & Broadhurst, perhaps the Memorial’s builders, it is wondered.

The booklet is available at a modest price in the Visitor Centre’s excellent bookshop from early June (2012).

The Duke of Kent is not now able to attend the traditional 1 July ceremony but he will be represented. There will be a ceremony on 1 August organized by the Conseil- Général to commemorate the inauguration of the Thiepval Memorial in 1932.