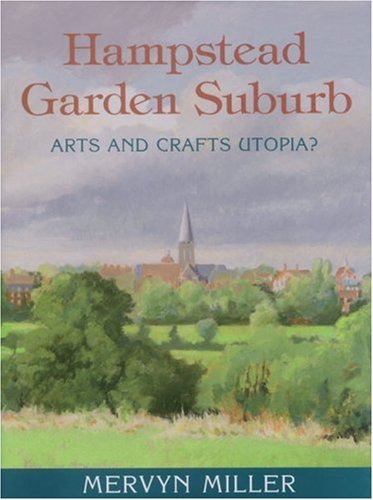 This is a fully revised and updated second edition of the authoritative study of Hampstead Garden Suburb first published in 1992. The first edition was written by Mervyn Miller, longstanding authority on garden cities and Architectural Adviser to the Lutyens Trust, together with the late A. Stuart Gray, architect, resident and champion of Hampstead Garden Suburb and author of Edwardian Architecture: A Biographical Dictionary. This new edition is by Miller alone. It is a handsome book, well and very intelligently illustrated, and absolutely authoritative. It deals with the background to and the history of the garden suburb, analyses its plan and development, and almost seems to discuss every single building. Without hyperbole, this book is surely the last word on the subject.

What, of course, readers of this newsletter will be most interested in is the discussion of the contribution of E.L. Lutyens to the success, or otherwise, of Hampstead Garden Suburb. The conventional view is, I suppose, that the Suburb, as designed by Raymond Unwin, would have been even more Picturesque and twee if Lutyens had not been brought in – probably by Alfred Lyttleton, his client for Grey Walls – to introduce a measure of formality and rigour. The truth is more complex, and plausible. Although Lutyens was officially appointed at the same time as Unwin in 1906, Miller argues that “It would be misleading to infer that Lutyens was responsible for the tightening up of the overall layout…. Rather his influence reinforced Unwin’s growing appreciation of formal design”. The conception of a central square containing two churches was present in Unwin’s preliminary (1905) plan; Lutyens’ contribution was to make the geometry of the streets rectilinear and to arrange the Anglican and Free churches in a symmetrical, disciplined composition. The evolution of the final design for the Central Square is analysed in detail and illustrated. The tragedy is, of course, that it was never completed as Lutyens intended, leaving it as a windswept and barren space, lacking enclosure and life – and so unlike the old German cities which had been Unwin’s inspiration.

The churches are, however, another matter when regarded purely as architecture, and the Anglican church – St. Judes’s – is a masterpiece, the finest executed ecclesiastical design by Lutyens, and fascinating in its subtle fusion of the Classical and vernacular. The silhouette of its barn-like roof and soaring steeple holds the Suburb together. Miller explains the evolution of the design, and how Lutyens had to accommodate the prejudices and Gothic tastes of the Suburb’s founder and guiding spirit, Henrietta Barnett. Clearly Lutyens and his de facto client did not get on, and Unwin acted as an intermediary. Often quoted is Lutyens’s catty remark in a letter to Herbert Baker that she was “A nice woman but proud of being a philistine – has no idea much beyond a window box full of geraniums, calceolarias and lobelias, over which you can see a goose on a green”. But, unlike most of his Edwardian clients, Henrietta Barnett was tough, committed, intelligent and visionary, and clearly he couldn’t charm her. Eventually Dame Henrietta engineered Lutyens’ dismissal – to the detriment, surely, of her noble creation.

What I would like to know more about is how Lutyens got on with the first vicar of St. Jude’s, the posturing, warmongering Revd. Basil Bourchier. To my surprise, Miller now mounts a lukewarm defence of the murals in the church by Walter Starmer, the painter introduced by Bourchier in the 1920s. These changed and surely spoiled the intended effect of Lutyens’ austere Wrennian interior of red brick and white plaster. This revisionism is prompted by a study of the murals carried out by Chris Miele for English Heritage which confirms what contemporary published accounts were keen to emphasise, which is that Lutyens was consulted. But he was in no position to object by then and perhaps he was just being polite; Christopher Hussey, who was surely in a position to know, stated that he regretted the murals. When, so very occasionally, Lutyens worked with an artist on one of his jobs, that artist – William Nicholson, Sargent Jagger – was seriously good. Starmer was not. In fact, he was terrible. Every time I visit St. Jude’s I long for whitewash.