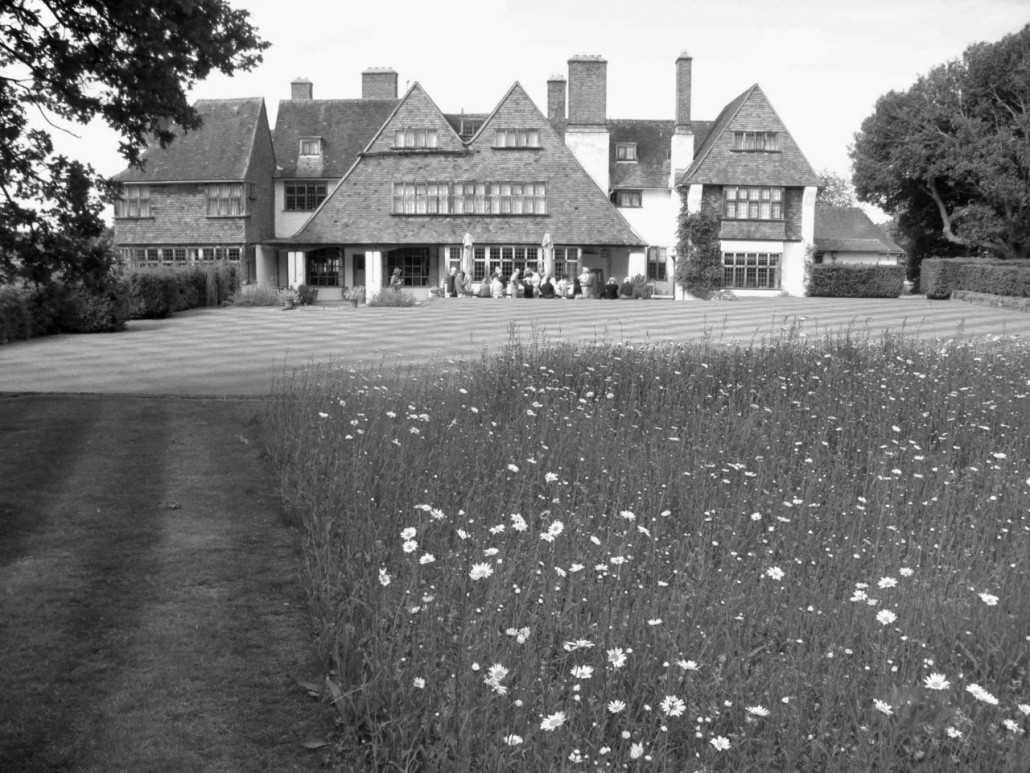 Berrydown Court – view from the garden 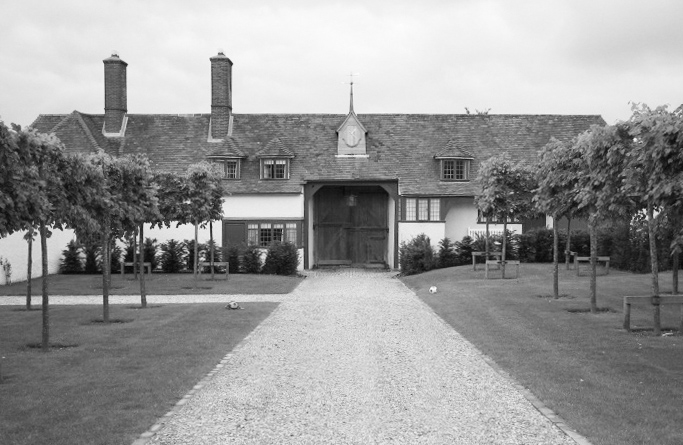 Berrydown was built in 1897 by Edwin Lutyens for his friend, the journalist and erstwhile MP, Archibald Grove. Edwin and Lady Emily were frequent visitors to the house after their marriage and Lady Emily spent several weeks there with the newborn Barbara in 1898, apparently stranded by bad weather. Lutyens and Grove shared an interest in fishing and cricket and it was at Berrydown that Edwin first met fellow cricket-enthusiast J M Barrie. Contemporaneously, Lutyens was entering discussions with Walter Hoare about the construction of Daneshill in Old Basing and by 1901 he had begun Marshcourt in Stockbridge for his friend Herbert Johnson.

By 1904 Archie Grove had sold Berrydown to Edward Cooper the head of the Lloyds underwriters Hartley, Cooper & Co. The Coopers increased the size of the estate to over 200 acres with the purchase of Berrydown Farm and subsequent owners, the Mathiesons, extended the house with the addition of the east-kitchen wing in 1926-1927. By 1976 the estate had reached 585 acres and when it was last sold in 2001 it was over 1900 acres of which 25 acres was the house and gardens. The farm land was sold to Jodi Scheckter to become part of the Laverstoke Park Estate but the house and gardens were sold separately to the current owners who commissioned Inskip-Jenkins to undertake a programme of restoration aided by the advice of the Lutyens Trust.

This was the first time since the restoration was completed that a group had been privileged to view the house and gardens and we were delighted that our number included the architect Chris Williams who had been involved in the restoration and several members of the Lutyens Trust who had visited the house during the restoration and contributed to the scholarly analysis of its history. It was a great disappointment for all to discover upon our arrival that we would not be able to view the interiors of the house but we were allowed to roam the grounds freely.

The house is approached through a pair of solid gates beneath a gatehouse set in a long tile-capped wall. This introduces an atmosphere of almost defensive seclusion which is perpetuated as the short drive passes through two walled courts to the front of the house which is plain and unadorned. During the ownership of the Coopers there were four poplar trees in the front courtyard and a large fig tree, which still survives, was trained against the walls. Pollarded lime trees line the outer court as they did in the 1900s, although they have been recently replaced with younger specimens. Behind the right-hand (west) wall of the entrance courts lies the large kitchen garden. This is reached through two arched doorways and the garden is bisected by a long, tall yew hedge.

The south-facing side of the house presents a contrasting character; the low sweeping roof-line and tile-hung walls give a rustic appearance to the house which is set in a broad expanse of terraced lawns, somewhat reminiscent of Fulbrook which was built at the same time with gardens designed by Gertrude Jekyll. Correspondence between Lutyens and his wife, while she was staying at Berrydown, shows that the garden presented Grove with difficulties: ‘Grove’ she wrote, had ‘just found the 19th solution to the garden problem and I enclose a card to explain it to you’. Would that that card had survived, but alas it has not! William Robinson was expected as a guest in September 1899 but the outcome of his visit is unknown.

The garden is formed of a succession of grassed terraces falling from east to west, interconnected by simple brick steps and horizontally linked by a long alley of sentinel yews which carry the eye out through the orchard. The lower terraces were originally designed as five square ‘rooms’ of grassy plats edged with herbaceous planting; two of these are now host to low, circular sculptures in slate and flints and a large swimming pool and entertainment area now occupies the site of two more of the squares. The enclosing yew hedges are still kept low and tightly clipped as Lutyens himself had specified. The southerly view across the lawns to great stands of rhododendrons and azaleas with open farmland beyond, is now closed by a modern sculpture which is a focus of attention within the garden.

A crazy-paving terrace surrounds the south side of the house where a new ‘Lindsay’ garden, designed by Mary Keen and Pip Morrison and sensitively planted with billowing drifts of flowering perennials and grasses, lies beneath the main windows of the house.

Here Chris Williams helpfully talked us through the main features of the architecture of the house and explained how they had restored original features such as the fireplace in the drawing room which had been altered considerably. During the work some delightful wall-paintings were uncovered including, possibly, some drawings of the Lutyens’s daughter Barbara. On 4th October 1898 Lady Emily had written: ‘Mr Grove also came up to Mrs Grove in extasies (sic) over yr genius and the picture of Barbara…’ and on 5th October: ‘the conversation during the day turns on Nedi and his genius – and the Barbaras in the hall are considered quite divine.’

The east wing of the house was added in the 1920s; it is not thought to be by Lutyens and although it blends well with the main house it is inferior in style.

As the afternoon sun faded, our host Phil the estate manager surprised us with the most delicious tea which we enjoyed on the south terrace. Although it was a disappointment not to see the house interiors we had enjoyed a wonderful privilege in roaming the grounds and appreciating this fine example of Edwin Lutyens’s small country houses. Stuart Martin, who had so ably managed the event expressed our
sincere thanks to Phil, his staff and through him to the owner for allowing us the visit.