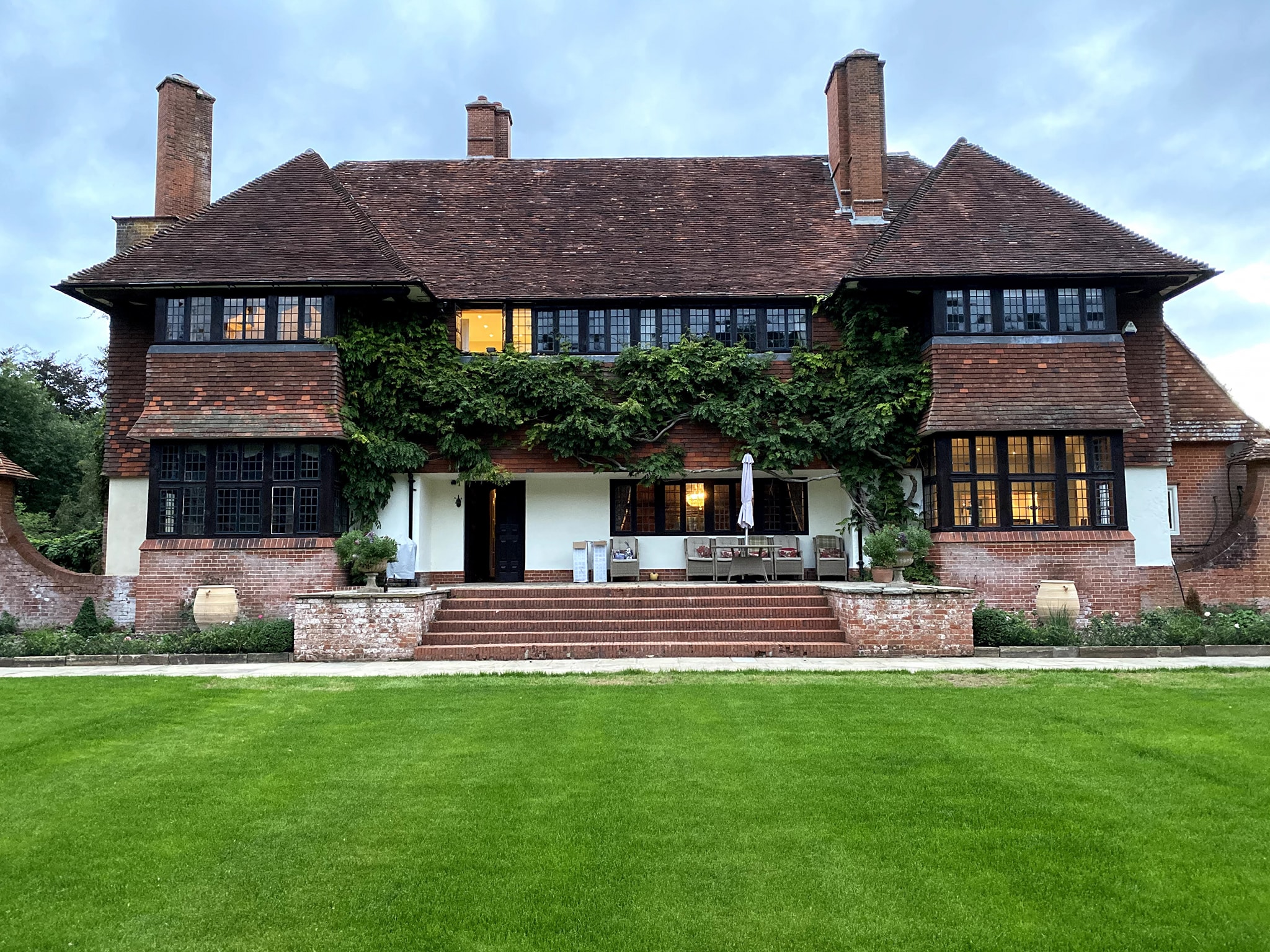 Crooksbury was Lutyens’s first country-house commission, which came from Arthur Chapman, a family friend and chairman of the Farnham Liberals. Lutyens was 20 at the time and a pupil in Ernest George’s office. This 1889 commission enabled Lutyens to set up his own practice at 6 Gray’s Inn Square, London. Earlier he had cut short his spell at Kensington School of Art, later saying ‘there was no more to be learned’.  The house is of additional interest in that Lutyens was called back twice — to extend it in 1898 for Chapman and part-remodel it for new owners in 1914.

Crooksbury is one of Sir Edwin Lutyens best known country houses and has been the subject of two major articles in ‘Country Life’. The original small house of 1890 represents the earliest work of Lutyens as an unknown architect. The extensive and partially separate east wing added in 1898, and enlarged in 1913, represents the architects work when his international reputation lead to his commission to design the new administrative capital of India at New Delhi.

Crooksbury House was divided in 1975.  Fig Tree Court is the house’s eastern wing, the seven-bedroom extension of 1898. It was originally constructed in a formal neo-Georgian style, which showed that Lutyens was already beginning to experiment with classicism (as did his design for the Farnham Liberal Club of 1894, also commissioned by Chapman). But this proved short-lived as a new owner in 1914 wanted a return to the vernacular style and Lutyens, rather than allow anyone else to interfere, rebuilt the wing in the traditional timber-and-tile Arts and Crafts style that survives today.

The east wing which contains the most important rooms and features of the building, in particular the magnificent drawing room with the original mahogany display cabinets, oak panelled dining room and vaulted hallway. The vaulted hall, with its arches and domed ceiling, is like a miniature, compressed version of St Jude’s Church in Hampstead Garden Suburb, designed by Lutyens in 1909. ‘It’s like the Whispering Gallery in St Paul’s,’ says a previous owner. ‘If someone is speaking as they walk in front of you, it appears as if the sound is coming from behind you. The domes act as parabolic reflectors.’ The formal walled garden – designed by Gertrude Jekyll – has deep herbaceous borders on either side, and stone-flagged steps lead down to a curved lawn with a perfectly circular pool 25ft in diameter, stocked with a hundred koi carp.  ‘Lutyens first met Jekyll in May the same year he started the house.  Thus began the celebrated partnership between the young architect and the garden designer, until her death in 1932. Her influence can be seen throughout the garden, in the borders and their planting, and in the use of shrubs and topiarised yew and bay as ‘punctuation marks.

Tickets are £35 per person.

Timings and details will be confirmed closer to the date.