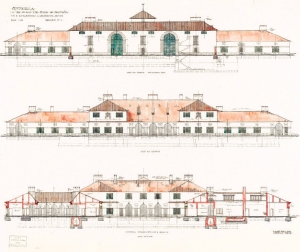 From 1912, Sir Edwin went out to India annually to supervise the work of New Delhi. Although most of the journey was by ship, he also travelled overland, often through Spain. He had met the Duke of Peñaranda, in England in 1915 and almost immediately the Duke had commissioned him to design a large country house at El Guadalperal, in Spain. After Sir Edwin arrived in Spain that same year, the Duke’s brother in law, the Duke of Santona, commissioned Sir Edwin to design another country house for his shooting estate of La Ventosilla. At least seven times on his way to India, Sir Edwin travelled through Spain to supervise these projects and also designed a large town palace in Madrid for the Count of Cimera. Sir Edwin usually stayed at the Liria Palace with the Duke of Alba, and saw many of Madrid’s buildings, even being given a tour of the Royal Palace by King Afonso XIII. Sadly, because of the unsettled political climate and then the Civil War, none of these three projects were finished. However, when the Duke of Alba was Ambassador to the Court of St James during WW2, he and Sir Edwin worked on designs to recreate the Liria Palace, which had been burnt out in the Civil War. These designs were used in the Liria Palace restoration of 1948-51, after Sir Edwin’s death in 1944, supervised by the Spanish architect Manuel Cabanyes.

This tour is to look at the sites of the three unbuilt buildings, the finished Liria Palace and Spanish comparisons with other aspects of Sir Edwin’s work – his houses and his government administrative buildings. There will be a private tour of the Palacio de Liria – rebuilt to EL’s designs 1948-51 – where we will visit the chapel which is not open to the public. There will be a day trip out to visit the site for El Guadalperal – original project not built but temporary buildings erected in 1920s to Sir Edwin’s designs – and the planned site for La Ventosilla. There will be a lecture on the full body of Lutyens’ planned Spanish work showing the strong connections with the country houses to the Viceroy’s House in New Delhi. Sir Edwin gave a lecture at in 1936 on his own work and we hope to recreate this using the original script and images.

Our visits are designed to look at not only what Sir Edwin designed but also what influenced him and what might have been influenced by his body of work. For example, we know that he visited and admired El Escorial, and it has been conjectured that he took the garden design concept from there and used it in his similarly placed – elevated and thus protected – garden at the Viceroy’s House in New Delhi. Plus, the planning influenced his Spanish country house designs and possibly the Viceroy’s House. So, there will be a private visit to El Escorial, guided by a monk who was an architect, with lunch in the monk’s refectory.

For the rest of the tour, we will be based in Madrid, visiting former city palaces and government administrative buildings from 1880-1944, which are not open to the public, so that we can compare these to Sir Edwin’s work in Spain, India and elsewhere. For example, the Asociación de la Prensa, where the architect has designed not only the building but also all the lighting and furniture as Sir Edwin did. We will be visiting the Prime Minister’s residence, Palacio Moncloa, as, like the Liria, it is an 18th C palace destroyed in the civil war and rebuilt between 1949 and 1953. Designed by Diego Méndez following the model of the Casa del Labrador of Aranjuez. it was originally allocated as the official residence of visiting Heads of State. There will be more buildings on the tour but we have not yet had replies from all our approaches. A full itinerary will be sent to participants when everything is confirmed. Government offices may have to close at short notice.

Participants are asked to arrive in Madrid on Saturday 27 May 2023 and leave on Sunday 4 June 2023. The tour will start on Sunday 28 May and will run through the week until Friday 2 June. We hope to keep Saturday 3 June free for individual sightseeing, so the accommodation is booked for the nights of 27 May through to 3 June inclusive.

Members will stay at the La Residencia de Estudiantes, Calle del Pinar 21, 28.006, Madrid – an institution set up in the early 20th century to advance the cause of science, arts, literature and liberal higher education in Spain. La Residencia was created in the spirit of the collegiate systems of Oxford and Cambridge Universities, as well as that of other universities in the mainland European continent, as a place for students to live and share their thoughts and ideas. Members will be staying in rooms once occupied by Spanish and international scientific, literary and artistic luminaires such as Salvador Dalí, Albert Einstein and Federico García Lorca. The whole complex was refurbished a few years ago to a high standard for post-graduate students and all rooms are en-suite.  Accommodation is on bed & breakfast basis only, but there is a dining room where evening meals can be taken at participants’ own cost. The Residencia is located in the diplomatic quarter so there are many restaurants within safe walking distance.

The total cost per single person is £1,250 and per couple is £1,150 each, inclusive of entrance tickets, transportation by coach to the country palaces, 8 continental breakfasts, 6 lunches, 8 nights’ accommodation La Residencia de Estudiantes.

Price does not include personal insurance, dinners, transfers to or from La Residencia de Estudiantes from airport or train station, tips nor airline or train travel to, or from, Madrid from Britain. You must book your own transportation to Madrid and have your own travel insurance.

Because of uncertainties over exchange rates and inflation increases, costs may have to increase but the Trust will work hard to keep the cost as advertised.

To secure your place on the tour, please pay a non-refundable deposit of £350 to the Lutyens Trust by direct transfer (Account Name: The Lutyens Trust, Sort Code: 40-11-58, Account Number 90300179, Reference: Spain Tour 2023).  Places will be given on a first-come-first-served basis.

The final payment will be requested in March 2023, two months before the tour.

Receipt of all payments will be acknowledged.

Should the visit be oversubscribed you will be advised, and a waiting list will be maintained.

This is a notification of some sort.

Visit to the Royal Chelsea Hospital