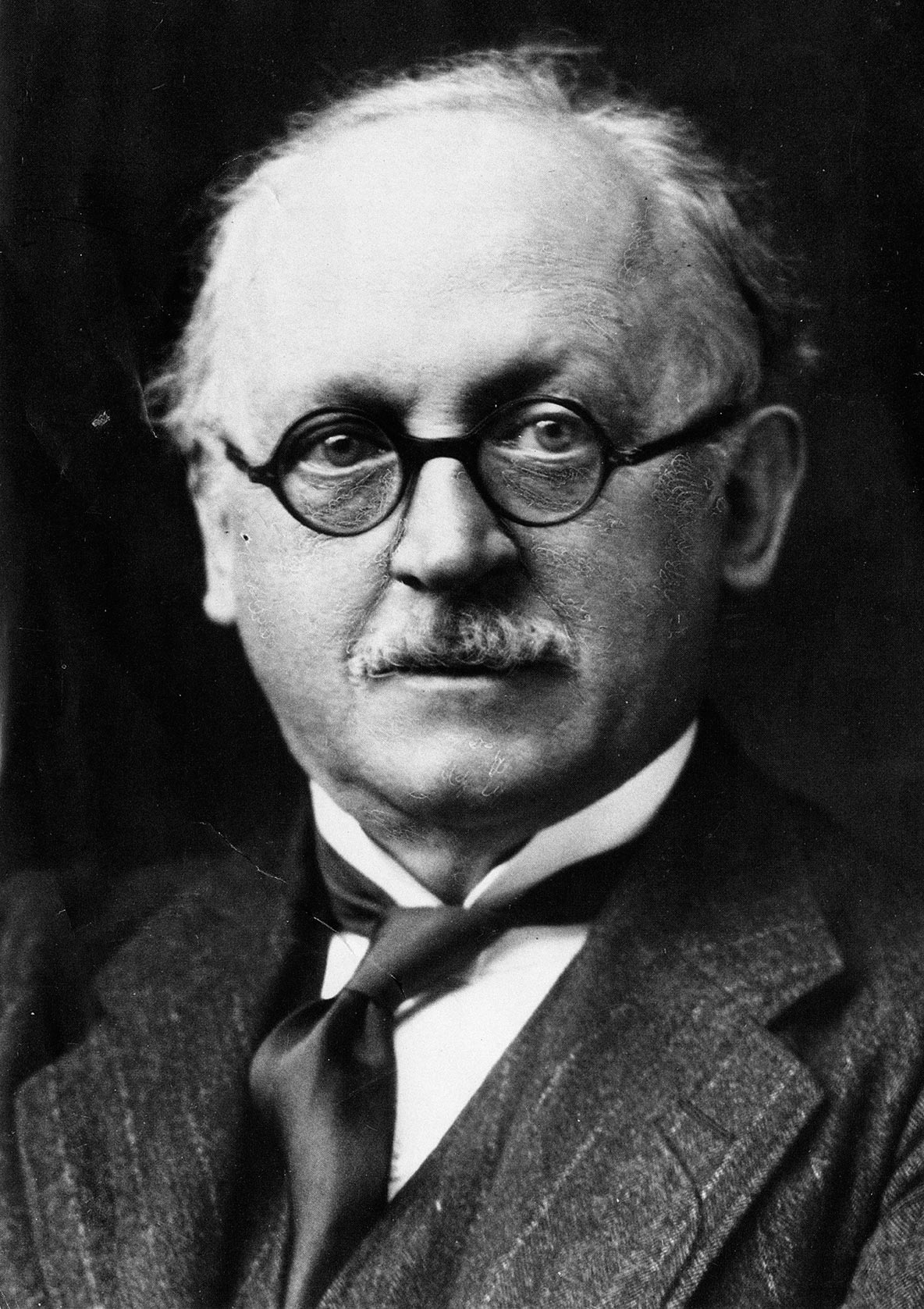 Mary Lutyens, 1908-99, a distinguished novelist and biographer, published her ‘personal life’ of her father in 1980. Mary was a founding Trustee and President of The Lutyens Trust. The following extracts are taken from her essay written for The Lutyens Exhibition Catalogue, editors Colin Amery and Margaret Richardson, published by The Arts Council, 1981.

Edwin Lutyens was the tenth child and ninth boy in a family of thirteen, of Charles and Mary Lutyens of Onslow Square, London, and Thursley in Surrey.

Edwin, always called Ned, was so delicate as the result of rheumatic fever as a child that he was the only one of the boys not to go to public school or university. This brought him very close to his mother whom he worshipped. He shared his sisters’ governess and received some extra schooling in the holidays from a much older brother.

His feelings about his lack of education were ambivalent; he felt at times that if he had gone to a public school he would have been more at his ease in the world of men, particularly when working on committees and for Government officials; on the other hand he told Osbert Sitwell, ‘Any talent I may have was due to a long illness as a boy, which afforded me time to think, and subsequent ill-health, because I was not allowed to play games, and so had to teach myself, for my enjoyment, to use my eyes instead of my feet’.

Ned, a nervous boy who, unlike the rest of his family, disliked riding (the only sport he ever cared for was fishing), spent his time when in the country indulging in his passion for looking at houses, watching all the stages of buildings going up, haunting the carpenter’s shop at Thursley and a builder’s yard in Guildford.

He had a flair for drawing and mathematics, and had further taught himself to draw by a simple self-devised method: he would take with him on all his walks a small pane of clear glass, a penknife and some pieces of soap sharpened to fine points; he would look at some portion of a building through the glass and trace what he saw with the soap. Cleaned with a damp rag, this ‘sketchbook’ would serve him over and over again.

At fifteen it had become apparent that Ned was cut out to be an architect, a career encouraged by Ralph Caldecott, a Surrey neighbour, the illustrator of so many delightful children’s books depicting Surrey cottages.

Early in 1885, therefore, he became a student at the Kensington School of Art. He did not finish the course, feeling after only two years that he had no more to learn there, nor did he stay more than a year in the office of Ernest George and Peto where he next went as a paying apprentice.

There he made friends with Herbert Baker, the chief assistant, seven years his senior, who was afterwards to collaborate with him in the building of New Delhi – an unhappy partnership that ended in what Ned called his ‘Bakerloo’.

In 1897 Edwin Lutyens married Emily Lytton, daughter of a Viceroy of India, whose father had died five years earlier. These five children, Barbra, Robert, Ursula, Elisabeth and Mary, were born by 1908. For all his love for Emily, Ned was not able to give her the companionship she craved. They had no interests in common. She loved reading and he scarcely read anything; his main recreation, when he indulged in one at all, was playing patience and, later on, doing The Times crossword puzzle.

With a nanny and nurserymaid to look after the children, Emily was bored and dissatisfied, yet, detesting social life, she had always pressed Ned to go out without her, so that now his clients felt no obligation to invite her when he went to visit them, a condition that added greatly to his popularity.

He was more at ease without her; he was not afraid of repeating his jokes or of flirting mildly with his hostesses. He gained the reputation for being the perfect guest, high-spirited and witty.

Many people who met Ned in later life found it hard to believe that he never lost his intrinsic shyness. ‘He had a wonderful way with his clients,’ one assistant recalled. ‘He was marvellous not only in dealing with materials but with human beings.’

He always got them to spend what he wanted them to spend. He said himself that he had to try to make his clients “purr” with his blandishments while bringing them round difficult corners. He got the best out of the workmen as well as the clients, for he had a deep respect for their craftsmanship as well as a knowledge and understanding of it from watching them at work in the years he had roamed the Surrey countryside as a boy. Only to Emily did Ned show the true seriousness of his nature in the thousands of letters he wrote to her during his absences in India and elsewhere. Having read so little, his ideas were always fresh; he seemed incapable of a commonplace thought.

He once wrote to Emily from India apropos of Herbert Baker, who was a great reader of poetry and whose work at the new city looked to Ned ‘distressing’: “I believe that no designer should ever read poetry. There is in the hearts of all men a natural desire for poetry. If read it is easily acquired and satisfied. If not read you have to get your eventual quota of it through and in your work and not be doped by other people’s adjectives.”

His personality, and fame

While he gained confidence in his work, his social diffidence remained. Forced into society in dealing with clients, he hid his shyness and inarticulateness behind a barrage of puns and drawings. He was never without a block of paper and pencils in his pocket with which to draw with equal ease and rapidity some detail of a house for a client or a comic sketch. It was characteristic of him that in after years when he had to entertain a mixture of people in his bungalow at New Delhi he had a round blackboard top made for the dining-room table and provided each guest with a piece of chalk.

Punning became a bad habit of Ned’s, though some of his puns were very witty – for example his remark at the Garrick Club when served with some fish: ‘This piece of cod passeth understanding’, and his opening words of a speech to the Owls Club in Cape Town, ‘I wish I had t’wit t’woo you.’ He certainly had the wit to woo Lady Hardinge, wife of the Viceroy, with his irresistible apology for some minor offence: ’I will wash your feet with my tears and dry them with my hair. True, I have very little hair but then you have very little feet.’ His picture jokes were more generally appreciated, such as a drawing of Gandhi riding a camel with the caption, ‘You should see Mysore’, and an imaginary tombstone for Lord Inchcape, Chairman of the P & O Shipping Line, engraved ‘R.I.P & O’.

Sir Edwin Landseer Lutyens in one his Napoleon chairs

Ned never showed an unhappy or anxious face to the world. As his success grew his circle widened and he began to feel more at ease in society, though E. V. Lucas and William Nicholson remained his closest friends.

E. V. Lucas wrote about him in 1924 in The Book of the Queen’s Dolls’ House: ‘…His friends were legion; his mind was electrically instant to respond to any sympathetic suggestion; he never broke his word; he never let you know if he was tired; and with it all he was out for fun.’

Ned’s word for fun was ‘vivreations’. His sense of fun occasionally communicated itself to his buildings where it was not always appreciated!

He took particular pleasure in designing nurseries and nursery furnishings, for then his gaiety, lightness of touch and childlike imagination could have full play. The nursery floor in Viceroy’s House in New Delhi was patterned in red and white stone checks for games of chess and draughts; into at least two of his nurseries in country houses in England he inserted a window at floor level so that children at the crawling stage could look out, and he once built a circular nursery so that no child could ever be put in the corner.

One of the minor projects that he hugely enjoyed was designing the Dolls’ House and its furnishings for Queen Mary (now at Windsor Castle). Lady Sackville admonished him for giving more attention to it than to an important commission he had just received for a new headquarters for the Persian Oil Company.

After Ned’s death Harold Nicolson was to write about him in Friday Mornings:

“Never since the days of Sheridan and Goldsmith has a man of genius been so widely beloved… Lutyens possessed the faculty of making everybody feel much younger. He adopted an identical attitude of bubbling friendliness whether he was talking to a Queen Dowager or a cigarette girl, a Cardinal or a schoolboy.

“He would on occasions disconcert the elderly by intruding with outrageous flippancy upon conversations, which were intended to be sedate. When reproved for those excursions he would show the most disarming contrition and begin all over again”.