New to the market since the spring is Ashby St Ledgers, an historic, predominantly 17th-century house with remodelling and additions carried out by Lutyens between 1903 and 1939. Now Grade II*-listed, the 20,000-sq ft house stands in 33 acres and includes nine reception rooms and 11 bedrooms, a formal garden, walled kitchen garden, parkland, woodland, lakes and a lodge cottage. The house was home to the Catesby family who were notorious for their involvement with the Gunpowder Plot, supposedly planned in a room above the gatehouse. Lutyens was retained by Ivor Guest, later 1st Viscount Wimborne, to remodel and extend the property, and Lutyens began by rendering the original house symmetrical by adding a matching wing to the eastern elevation. Further accommodation was provided (against Lutyens’s wishes) by the addition of a 17th-century timbered house transported here lock, stock and barrel from Ipswich, which was linked to the existing building by a new North Hall. A north wing incorporating further bedrooms and domestic offices was added and the dining room extended in 1924 and again in 1938, finally providing a 110-ft vista through to the North Hall. This is the most interesting, recognisably Lutyens element as externally this wing is in a pared-back, neo-Tudor style in warm honey-coloured Banbury stone.

ASG Butler in his Lutyens Memorial volumes commends the “immense care which Lutyens — even when engaged on works of Imperial magnitude — gave to the continuous extension of a house necessarily in a style for which he latterly cared little”. The property remained in the Wimborne family until the late 1970s when it was sold. However, 20 years later, the 26-year-old 4th Viscount Wimborne bought it back and instigated an extensive, careful restoration in an understated style. The house was featured in Country Life in 2004, and clearly impressed writer and architectural historian Jeremy Musson, who enthused, “This restoration is an undoubted triumph. It shows how well an historic house can be adapted by an owner, respecting, even rescuing the integrity of the original while… adding a layer of new sophistication… That the house has also received another layer of elegance with such lightness of touch is an inspiration”. Now beautifully presented, the house has a guide price of £5m through Savills.

Also available is Forest House. A Grade II-listed, two-storey, 6,825-sq ft redbrick building in an idyllic 10-acre setting, it was originally a Sussex farmhouse to which Lutyens made minor alterations in 1897 and returned to substantially remodel it in 1905. The entrance front is L-shaped with the porch set diagonally, while the garden elevation to the southwest has a clay tile roof that sweeps down to a ground floor loggia on each side (reminiscent of Homewood at Knebworth of 1901). Inside, the double-height entrance hall features two internal Juliet balconies. Currently being offered at a guide price of £2m by Humberts and Knight Frank.

About 12 miles away, Park Farm at Felbridge, Surrey is a Grade II-listed farmhouse of 1916. It is likely to have been part of Lutyens’s plans for the grander Felbridge Place, of which only the two service buildings, kennels and stables were executed. Park Farm may have been intended as the Home Farm on the estate and would have been separate from Felbridge Place. Designed in the Vernacular style, the house is of brown brick under a tiled roof, hipped to the end projecting wings and swept low to the centre under a central large brick chimney. Inside is a fine staircase hall — built around the central chimneystack — which incorporates a gallery. The 3,619-sq ft house, which stands in 17-acre grounds, has five bedrooms and outbuildings measuring 4,169 sq ft. Available through Knight Frank. Guide price: £1.75m. 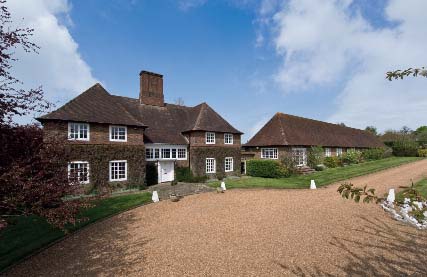 This house was built in 1911 for Gertrude Jekyll’s nephew-in-law, Reginald McKenna, a Liberal MP who became Home Secretary, Chancellor of the Exchequer and, fortunately for Lutyens, chairman of Midland Bank. The 11,720-sq ft house is ideal for entertaining on a grand scale. Available through Hathaways. Guide price of £25m.

Crooksbury House Cottage, The Clock House and The Dovecote, near Tilford, Surrey

These former outbuildings to Crooksbury House (Lutyens’s first substantial house) are being offered as one lot through Savills at £1.95m. Arranged around a courtyard, the three buildings are Grade II-listed and comprise a total of 6,575 sq ft of accommodation in 5.6 acres of gardens and grounds.

Of the seven houses I reviewed in the last Newsletter, five remain for sale. These are: Abbotswood in Gloucestershire (at £27-30m through Knight Frank); Warren Mere in Surrey (at £6.75m through Hamptons International); Hazelhatch, Surrey (at £3.7m through Savills); Wood end, Surrey (at £1.275m through de Mallet Morgan), and 5 Erskine Hill in Hampstead Garden Suburb (at a reduced price of £1.895m through Godfrey and Barr).

Richard Page is marketing director for the London & Premier brands of Countrywide plc, which include John D Wood & Co. He has advised on the sale of many Lutyens houses. Do please contact him with any Edwin Lutyens-related property news. Email: rpage@countrywide.co.uk

Fundraising Event at the Residence of the Belgian Ambassador in London
Scroll to top
This website uses cookies to improve your experience. We'll assume you're ok with this, but you can opt-out if you wish.Accept Read More
Privacy & Cookies Policy
Necessary Always Enabled