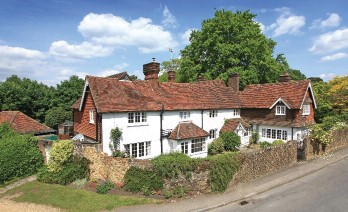 Aged only 18 but believing “they had nothing left to teach him”, Edwin Lutyens left the architecture course at South Kensington School of Art that he was attending and joined the office of Ernest George & Peto, a leading architects practice. During this period and shortly before he set up his own practice in 1889, Lutyens received a commission — one of his earliest — to extend a 17th-century cottage and shop known as The Corner, located opposite his parents’ house in his home village of Thursley, in 1888.

His client was Edmund Gray, for whom he added a wing to the back of the building. It was a small yet significant job, its style no doubt heavily influenced by George’s more compact house designs. Lutyens made further additions in 1895. This charming village house is now Grade II-listed and has five bedrooms, two bathrooms, three reception rooms, a study, garage and garden measuring approximately one-third of an acre. Available through Knight Frank. Price: £1.6m. 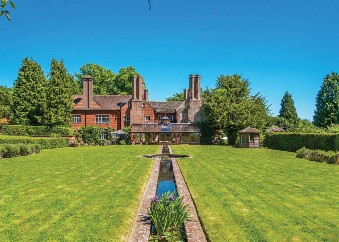 The Grade II-listed Legh Manor has come to the market. In 1917, this 16th-century house was bought by Sir William and Lady Chance, previous clients of Lutyens. Prior to this, they had commissioned him in 1897 to build Orchards at Munstead, Surrey, one of his best-known and innovative Arts and Crafts country houses. As the new owners of Legh Manor, they called him in to alter and restore the house and gardens. The most recognisable external features of these works are the tall, diagonally set twin chimney stacks on each of the flank ends of the H-plan house (which bear a striking similarity to some of those at Orchards).

The gardens, redesigned in collaboration with Jekyll, also received the Lutyens treatment: they were compartmentalised with yew hedging and stonework and include a large lawn with a central stone-edged rill. The house offers over 7,000 sq ft of accommodation, including six bedrooms, four bathrooms, reception hall, three reception rooms and a kitchen-cum-breakfast room opening on to an orangery.

Also included is a Grade II-listed barn conversion with three bedrooms and bathrooms, kitchen-cum-dining room, two reception rooms and games room. The gardens and grounds include an orchard and woodland and extend to 26.7 acres. 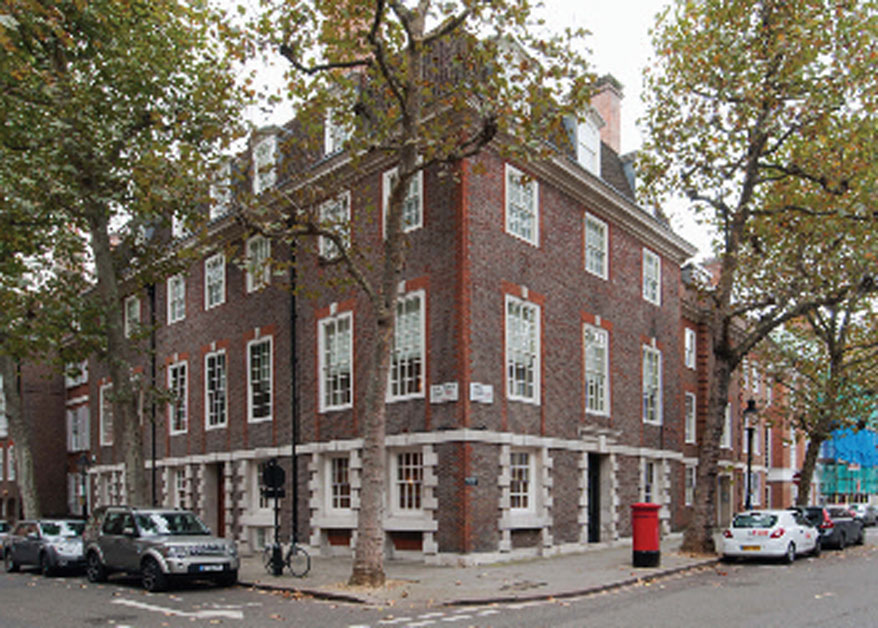 Some significant houses previously featured in this column remain on the market:

Built for Reginald McKenna in the Neo-Georgian style in 1911, the house passed to Henry Mond, the ICI heir, who had the interior extensively remodelled in 1930 in the Art Deco style. The Grade II-listed accommodation includes three main reception rooms, seven bedroom suites, a gym, roof terrace and staff quarters. It is priced at £17m and available through Dexters. 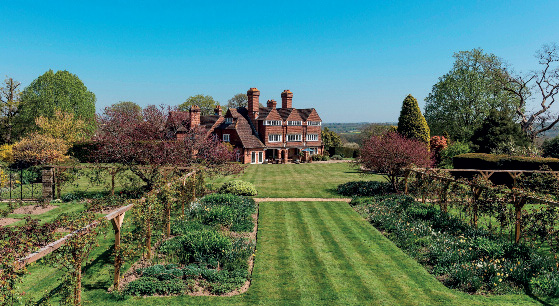 The exceptional Ruckmans Estate remains available. With a garden designed by Jekyll, this eight-bedroom Lutyens house of 1894 with a 1902 extension is the centrepiece of a 507-acre estate that includes seven cottages and two other houses, together with farm buildings. Available through Savills: Priced at £12m.

It is pleasing to report that Ferry Inn, Rosneath, Dunbartonshire (featured in the Winter 2016 Newsletter) has been sold. This cottage on the shores of Gare Loch — commissioned by HRH Princess Louise, daughter of Queen Victoria — is a wonderful example of Lutyens’s Arts and Crafts style with Art Nouveau influences.

Chinthurst Hill, Wonersh, Surrey, which recently came to the market, has already found a buyer. The nine-bedroom house of 1893 is situated among 18 acres of gardens and grounds with a swimming pool, tennis court and lodge cottage.

Mesnil Warren, Newmarket, Suffolk has a sale agreed, following a price reduction from £2.95m to £2.35m. The 1925 extension was designed by Lutyens for the Hon
George Lambton, Lord Derby’s racehorse trainer.

The following houses previously featured in the column have received price reductions:

Little Thakeham, near Pulborough, West Sussex has been reduced from £6m to £5.5m. Described by Lutyens as “the best of the bunch”, the Grade I-listed nine bedroom house stands in 15 acres and is available through Strutt & Parker.

Crooksbury, Farnham, Surrey of 1889 was Lutyens’s first country-house commission. It was later extended and remodelled by him in 1898 and again in 1914. The property for sale is the eastern wing, which is now Grade II-listed and has seven bedrooms set in 6.5 acres of garden designed by Jekyll. Its price has been reduced from £2.5m to £2.25m and it’s available through Hamptons International.

Warren Mere, Thursley, Surrey has received a significant reduction from £6.75m to £4.95m. Its original 16th-century building was extensively altered and extended by Lutyens in 1896 and again in 1909. Now Grade II-listed, it has eight bedrooms and is set in 51 acres. Available through Hamptons International.